The 8-Bit Blue Bomber is Back! 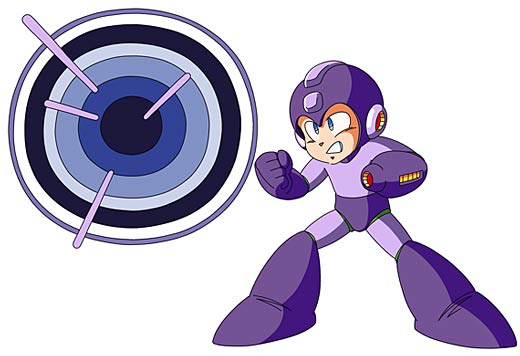 HIGH Playing a game that was designed correctly to be a true challenge.

LOW I miss the slide feature of later Mega Man games (and a downloadable character does not count!)

WTF Finally figuring out how to use the Black Hole Bomb correctly! It took me way too long…

Being a medium for over a quarter of a century, and spending almost as much time in the mainstream, it should be no surprise that the video game industry has been influenced by feelings of nostalgia. It helps decent games sell like hotcakes (see Super Smash Bros. Brawl), allows poor quality games to sell more than they ever should (see any of the 3D Sonic games), and breathes life into franchises well past their expiration date (see any of the Duke Nukem sequels). Nostalgia is good and bad, rarely one or the other. It reminds us of the good, but clouds our judgment and won’t let us see that things may not have been that great. With the release of Mega Man 9, Capcom is hoping to capitalize on the nostalgia of those of us who grew up with the Blue Bomber.

The game starts pulling the heartstrings of older gamers by giving us a back-story that only an 8-bit mother could love. Single frames, cheesy music, and horrendous dialogue let us know what is happening to Mega Man and company in the year 20XX. From there it is nothing but retro gaming. Players must battle their way through eight robot bosses, each with their own themed level, before taking on the diabolical Dr. Wily. Each level is packed full of reappearing enemies, gaps you can just barely jump across, and good old one-hit-kill spikes. While the levels are well designed, players can expect more of the same themes that have long become staples of the series: fire, water, and electricity are just a few examples of familiar locales.

Classic Mega Man sounds make a return as well. While never as memorable as other classic games (like Mario or Zelda) Mega Man’s soundtrack is perhaps still the most fitting of any 8-bit game. Older players will be pleased to hear the villain introduction theme make a return, as do the standard sound effects. Each level has its own variation of the music and the bleeps and bloops add to the robotic setting of the Blue Bomber’s universe. While the sound is cheesy it fits the setting of Mega Man better than most video games could ever hope to achieve. But, if you are looking for high-tech sound effects and Dolby Digital surround sound, you may wish to look elsewhere, as you will not find them in Mega Man 9. 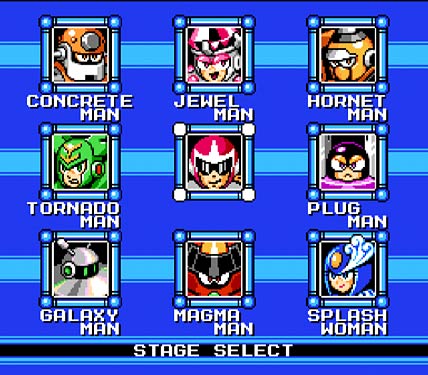 However, most gamers will probably welcome the challenge of a slight learning curve while playing through the main game. Even though I grew up blasting my way past Dr. Wily’s original henchmen, I was surprised at how tough each level was the first time through the game. There is no correct way to defeat the bosses (no matter what the online walkthroughs say), but each boss has a weapon that makes conquering each foe easier than just relying on the standard blaster. Defeating some bosses seems all too easy, but the choice to tackle each level in any order you choose has always been a strong point in the series. Mega Man 9 continues this trend and reminds you of a reason Mega Man was great in the first place. Once you have an idea of what level to tackle when, and what weapon to use at which time, the game becomes fairly easy and some gamers may yawn at the speed at which they can blast through hordes of robot minions. They may also be yawing at the lackluster graphics whizzing by on screen.

Unlike with the earlier revival of another old franchise, Bionic Commando, Capcom has decided to leave the graphics of Mega Man to all his NES glory. Some gamers may love this. Others, especially those who have grown up knowing nothing prior to the PlayStation, may find the graphics unappealing. Plainly put, Mega Man 9’s graphics stink out loud. The artistic reasoning behind Capcom taking this low-grade route with the visuals is definitely to capitalize on the nostalgia of older gamers who grew up with the NES. The blocky character models and many of the stages just do not work for me, and I grew up with Nintendo’s 8-bit box! Two-dimensional side scrolling is always welcome, but give me a smooth, polished appearance. if I wanted to play a game with retro graphics, I would download Mega Man 2.

Even though much of the game seems to be stuck in the late ‘80s, there are some great additions that will keep most gamers busy once they tire of beating the main quest. The game has numerous challenges that will keep the hardcore gamers pleased. I achieved many of these just by playing through the game once, but other challenges will surely test your gaming skills. Some challenges are fairly simple (kill 100 enemies) while others border on the insane (beat the game without taking a hit). Of all the new challenges, I enjoyed the time trials mode most of all. 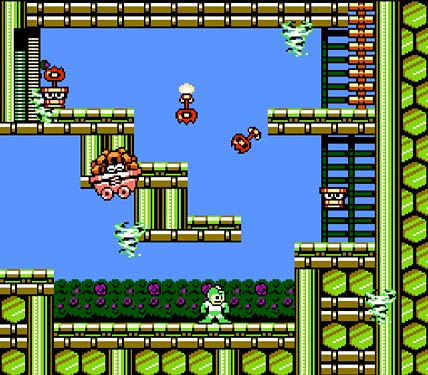 No matter how far one has progressed in the main storyline, gamers can test their skills at beating each level in the fastest time possible. A timer is displayed on the screen, and it is just you against the clock. All upgraded weapons are at your disposal, however you have a lone life to accomplish the task. Racing against the clock makes even the easiest stages that much more challenging. Players can also check the leader boards to see how they rank amongst gamers from around the world. Taking a look at the leader boards may be a reality check for some: it was for me! There are some insane times put up in just the first week of release. With these challenges and the promise of downloadable content, including characters, gamers are sure to keep busy with Mega Man long after sending Dr. Wily running for the hills.

So, just how nostalgic are you for games of a bygone era? Your answer will probably be the determining factor in how much you enjoy Mega Man 9. No review score could ever sway those feelings. Rating: 7 of 10

Disclosures: This game was obtained via online store download and reviewed on the Wii. Approximately 4 hours of play was devoted to single-player modes.

Parents: According to the ESRB, this game contains mild cartoon violence. Enemies and Mega Man explode when they are beaten with not a drop of robot blood shed. Parents may want to be cautious having their younger gamers play Mega Man 9 as the young ones may find the learning curve overly frustrating at times.

Deaf & Hard of Hearing: While the robotic 8-bit sounds of the Mega Man fit the game universe well, they are not needed to progress through any level. Enemies have visual patterns that can be memorized but none rely on sound cues in any way, shape, or form.