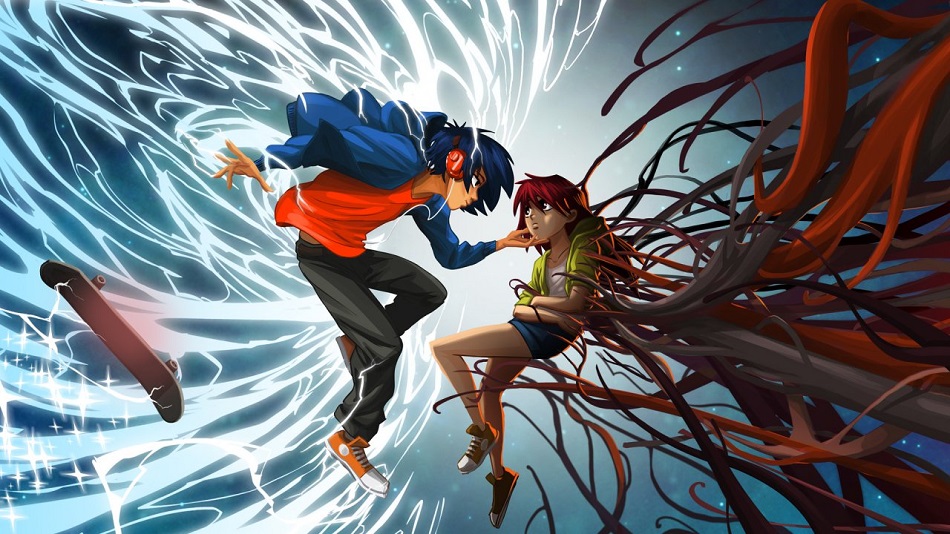 WTF Why are so many animals trying to attack Kaito!?

Lost in Harmony is a rhythm-based runner originally released in 2016 for iOS and Android devices. It has now been re-released for the Nintendo Switch and PC.

Kaito’s Adventure is told through the text messages of Kaito and his girlfriend Aya as they discuss health issues that are impacting Aya. Gameplay takes place in Kaito’s dreams after each nightly conversation. These dreams reflect the mood of that night’s texts, such as hope or despair, but are often a combination of the two. Kaito’s Adventure is a tragic love story and while the ending seemed obvious early on, this did not diminish the quality of the writing. It’s a short but heartfelt tale, and a well written one.

Unfortunately, M.I.R.A.I.’s Escape does not deliver the same strong narrative. M.I.R.A.I. is a self-aware robot who has fled the captivity of its creators. Beyond that, story is generic sci-fi and never approaches the quality of storytelling that Kaito’s tale did.

Gameplay is the same in both stories, with players on a fixed plane scrolling towards the screen – Kaito carrying Aya piggyback on a skateboard, M.I.R.A.I. hovering along. These auto-scrolling roads are filled with barriers like traffic barrels, cars and bicycles, or even charging bison, swooping pelicans, and falling boulders! The main goal is to dodge these roadblocks in time with the beat of each stage’s music. Most of this is completed simply by moving the character left of right, though objects appearing from the front of the screen can also be jumped over. 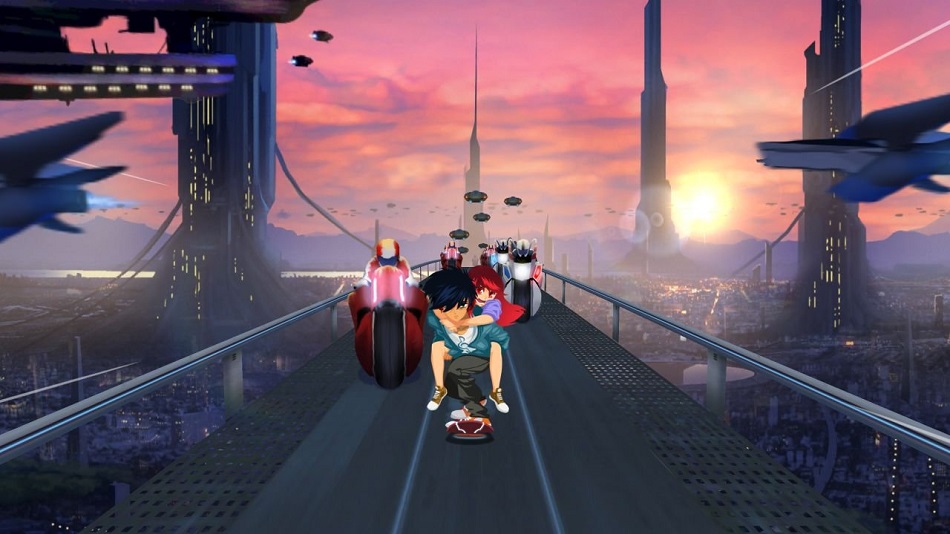 While the concept is great, the implementation is not always in tune. The obstacles reach the player in time with the beat, but the character moves freely, with little regard to the music. Most levels are clearly divided into five sections and obstacles will always appear in those defined sections. However, the player can move back and forth, flowing in and out of each quintile, or even straddling the lines between each partition. This unlimited movement often makes the character fall out of step with the beat.

While player movement is loose and rarely feels connected to the music, there are sections scattered throughout each level that require standard rhythm-based button pressing. Players will need to hit corresponding buttons as they scroll across the screen from left to right. This is typical rhythm gameplay, but it’s hindered by the on-screen button layout.

In any great rhythm game, the notes should be displayed onscreen similar to the button layout on the controller, but Lost in Harmony doesn’t follow this standard design. Instead, the notes onscreen are presented in a vertical row, while the gamepad has as diamond layout. This isn’t the most complicated issue to overcome when the action is slow, but when notes are crossing the screen at high speeds it can often lead to confusion and missed notes.

As for the music, Lost in Harmony doesn’t disappoint. There are remixes of numerous classic songs like Swan Lake, Nutcracker, and even Korobeiniki (the Tetris theme song). There’s also an original song by Wyclef Jean that fits surprisingly well in a soundtrack that is mostly instrumental. Everything is well-arranged and fit the game’s theme impeccably, and I can say that the soundtrack is what kept me playing more than any other aspect.

Lost in Harmony is a short experience, but the fabulous soundtrack and the story of Kaito and Aya are enough to make it a worthwhile one. Rating: 7 out of 10

Disclosures: This game is developed by Digixart/Midgard Studio and published by Plug In Digital. It is currently available on Switch, Steam, and iOS/Android devices. This copy of the game was obtained via publisher and reviewed on the Switch. Approximately 4 hours of play were devoted to the single-player mode, and the game was completed. There are no multiplayer modes.

Parents: According to the ESRB, this game is rated E 10+ and contains Fantasy Violence. In a couple levels an angry bear chases the protagonist – this could frighten the youngest players, but most of the game is just dodging obstacles and other vehicles on the road. Kaito’s adventure is tragic, but never overly violent. Most music does not have lyrics, but those that do are never profane. Pretty safe game for players of all ages.

Deaf & Hard of Hearing Gamers: Lost in Harmony is very reliant on music, though visual cues appear to accompany all elements needed for gameplay. Obstacles from the front and sides are identified with an arrow before they arrive, while objects approaching from the rear can be seen in the distance. Rhythm sections clearly show the needed buttons on the screen. Story elements are delivered solely through text, but the size can’t be changed. The game is fully accessible. 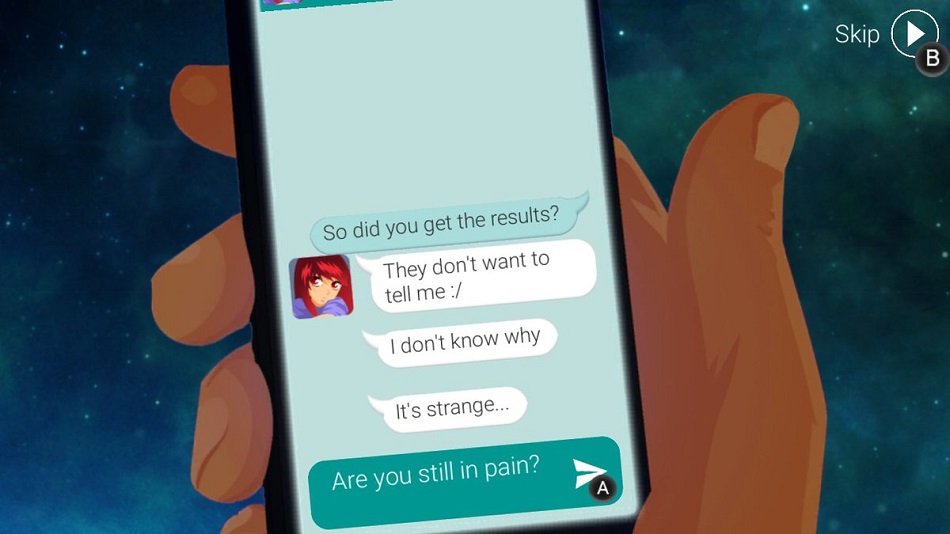 Remappable Controls: No, this game’s controls are not remappable. No control scheme is displayed in game — there isn’t even an options screen! Players will use the control stick to dodge obstacles and the B button is used to jump over barriers in the road. During rhythm sections, players will use all four face buttons, both individually and in pairs.