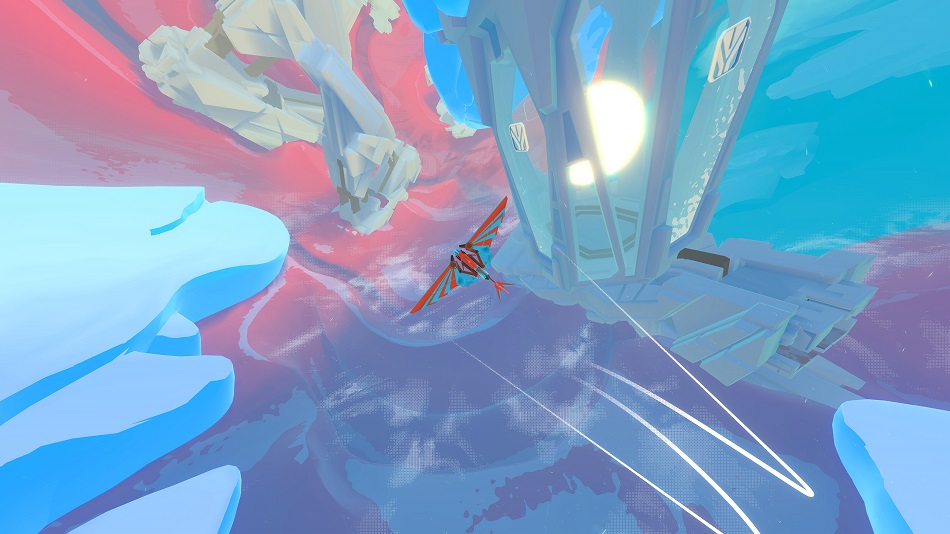 HIGH The encounters with the chamber gods.

LOW Trying to find a tunnel in one of the mid-game chambers.

WTF The whole gravity concept is one big WTF.

InnerSpace is a flight exploration game. Players take the role of a sentient airship that’s just been created by a submarine, which itself may or may not be an artificial lifeform. It’s up to the airship to fly around searching for relics from ancient cultures while collecting an ancient source of power known as Wind. InnerSpace could probably sell itself on this scenario alone, but it offers more.

The areas of exploration aren’t the normal landscapes found in flight sims and other airborne games. No, InnerSpace takes place entirely inside a series of planets, collectively known as the Inverse. These planets, or “chambers”, could each best be described as the interior of a basketball, if a basketball contained water, mountains, and gigantic statues from long-dead civilizations. Then, for good measure, the game has one more twist – the gravity.

Instead of real-world gravity pulling everything to the center, gravity in InnerSpace pulls everything outwards. This creates one of the most mind-blowing effects I’ve experienced in a game. There is no up. There is no down. It feels a bit like simulated space flight, but the landscapes and seas of the Inverse create an effect more surreal than a simple black expanse dotted with stars. This takes some getting used to, but it’s a grand idea executed well

After a brief introduction, the airship is sent off to find relics and Wind scattered throughout the different chambers. The sentient submarine doles out facts about the Inverse and occasionally drops hints about how to progress. Many of the collection items are in plain sight, while others require finding hidden locations, like caves and tunnels. This searching gives players plenty to find and is never rushed, as all tasks can be completed leisurely.

As more and more is collected, new tasks become required, like hitting a switch or cutting a rope. The airship eventually collects enough materials that provide a modification to allow it to dive into the depths of seas on the outer surface of every area. Finally, players must interact with and help various ‘gods’ who still inhabit the chambers. These interactions are some of the best parts of InnerSpace, and these can also be completed at a leisurely pace. 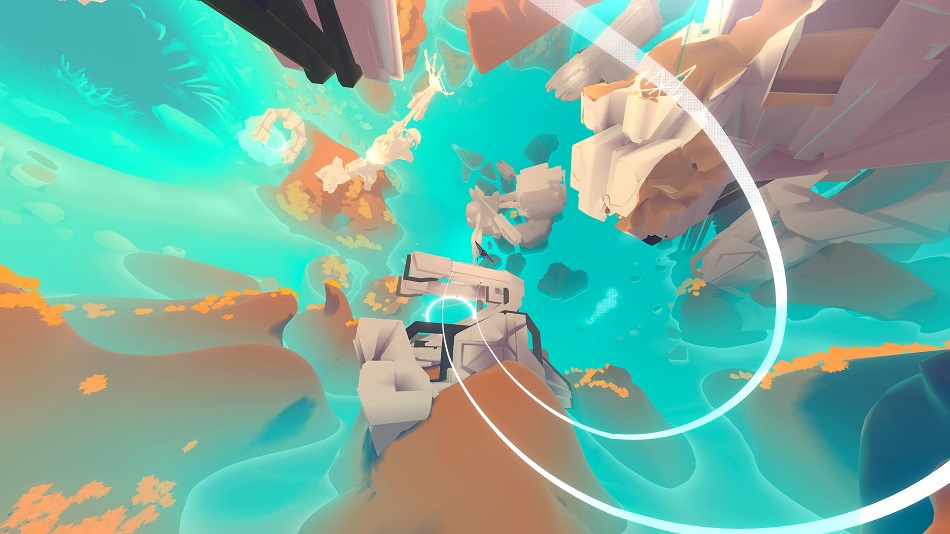 With a clever concept and calm demeanor, InnerSpace hits many of the right notes. However, its biggest strength also creates one of its biggest problems — the unusual pull of gravity makes it too easy to fly in circles and become disoriented.

There were many times when I’d be soaring around and around, mistakenly thinking I was exploring new locations. One particular chamber near the mid-game found me searching for something for close to an hour before I postponed the hunt and took a break. The thing was eventually found (and that was one of the more extreme examples) but there were many other times when I flew around much longer than was warranted when looking for a tunnel or switch.

Some type of beacon system could have gone a long way towards solving the issue of disorientation — being able to place a marker in already-explored areas would have allowed me to realize when I’d inadvertently returned to an area that had already been searched. If not a beacon, then perhaps a map or some other system to help players realize when they keep returning to the same location, because it happens a lot in InnerSpace.

One other issue arose for me, connected to the submarine. Obviously, your exploration companion is restricted to areas of water, but much of the Inverse has passages that help the Archeologist move from one area to the next. However, the sub is unable to access some chambers during the mid-game. At these times I found that it wasn’t always obvious what to do, and the sub’s subtle hints were greatly missed.

Once I overcame my disorientation, figured out my tasks and conquered the middle of the Inverse, the last few sections were considerably more straightforward and delivered feelings of being awestruck similar to those I experienced at its beginning. InnerSpace suffers from some minor issues, but remains a game full of original ideas that’s worth getting lost in. Rating: 7 out of 10

Disclosures: This game is developed by PolyKnight Games and published by Aspyr Media, Inc. It is currently available on Switch, PS4, XBO, and Steam. This copy of the game was obtained via publisher and reviewed on the Nintendo Switch. Approximately 7 hours of play were devoted to the single-player mode, and the game was completed. There are no multiplayer modes.

Parents: According to the ESRB, this game is rated E for Everyone. This game is suitable for all members of the family. Some of the demigods’ appearances may frighten younger gamers, but the beasts are never angry nor do they attack. Younger players may get frustrated with the unique physics within the game, as it’s very easy to go in circles and get lost within the different chambers.

Deaf & Hard of Hearing Gamers: Music appears to help with gameplay. In one chamber the tempo increased as a task was completed. The color of the object appeared to change as well, but the color change did not seem as obvious as the audio. When the ship is near a relic, a sound cue begins to beep and the controller begins to vibrate. However, no visual clue hinted that a relic was nearby.  Without a controller with force-feedback, this game is not fully accessible.

Remappable Controls: Beyond the ability to invert the axis controls, this game’s controls are not remappable.