Romp In The Woods 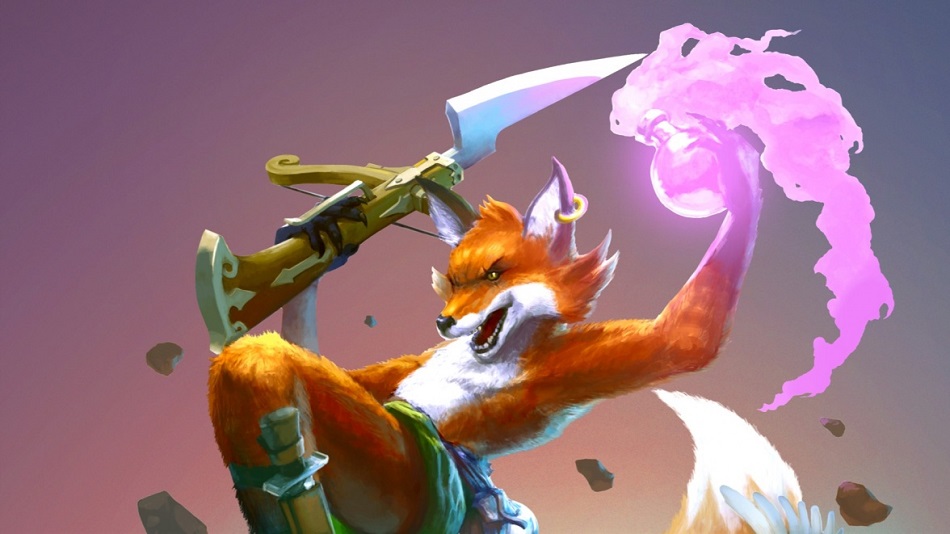 HIGH The boss battles at the end of each season.

LOW Unlocking the bonus stages is far from rewarding.

WTF Some enemies reappear after death, but others don’t?

Fox n Forests is a successful 2016 Kickstarter inspired by games such as Super Ghouls ‘n Ghosts, Wonder Boy in Monster World, and even Castlevania. With a style that would be at home on the Super Nintendo or Sega Genesis, FnF is hoping to tug at 16-bit heartstrings and live up to those lofty, genre-defining titles.

The protagonist is a fox, Rick, who was searching for some food one day when he came across Patty, a partridge. Patty staves off becoming dinner when she convinces Rick that helping the Season Tree will result in a huge reward. The Season Tree is under attack by mysterious forces, and the seasons throughout the land are topsy-turvy. Rick agrees to help and sets out to find the magical bark needed to stop the chaos.

The world is broken down into four main seasons – each contains two levels, a boss battle, and a bonus stage. Platforming is straightforward, but what sets Fox n Forests apart is Rick’s ability to change the seasons while exploring. An impassable water pool in the spring can be changed to a traversable sheet of ice in the winter. A tree in full bloom during the summer will lose its leaves in the fall to reveal hidden platforms accessing a higher location. A magic meter keeps track of how long the alternate season will remain. 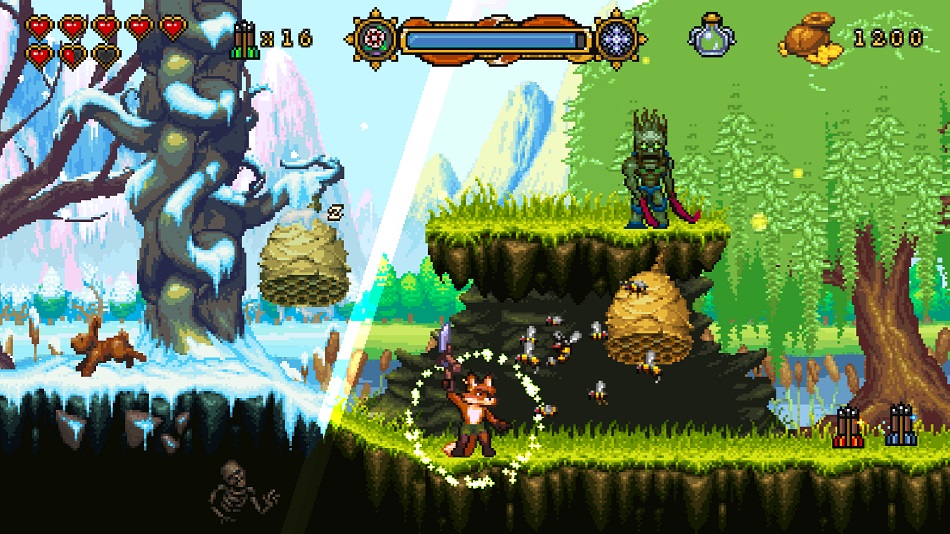 These environmental changes are well designed, but each level has only one predetermined alternate season. I would love to see how a level changes over all four seasons, but unfortunately, players are limited to just two options per stage. A minor disappointment.

In addition to platforming levels, Fox n Forests contains two random shmup levels – one in the fall and one in the winter. While neither one was groundbreaking, they were a welcome surprise. I never thought I would ride a partridge while flipping the weather to bypass obstacles in a shooter here, so big thumbs up for a truly unique moment.

Beyond seasonal obstacles, Rick must contend with a bevy of enemies like a plant/warthog hybrid and an ant that spews some type of toxic goop from the abdomen. Changing seasons will defeat some enemies, but it’s usually safer to resort to his crossbow or melee attacks. In addition to standard arrows, players earn various special arrows. However, the crossbow can only be fired while standing. When Rick jumps, the arrow button unleashes a melee strike. This put a slight damper on the combat, as numerous times I wanted to jump and fire a shot at a distant enemy, only to see Rick swing wildly at the air. 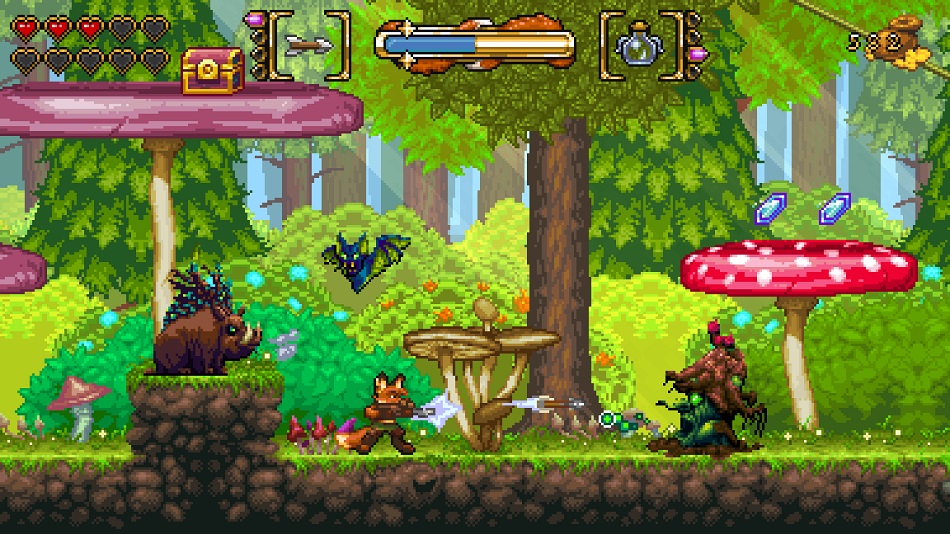 The levels and combat here are enjoyable, but the real highlights are the boss battles. Large, monstrous enemies are the final roadblock preventing Rick from obtaining the bark requested by the Season Tree, and these fights showcase the best of the season modifications. The fights are tough, but never to the point of frustration, and the developers even offer optional clues to victory should Rick die during one of these encounters. The final boss was a little disappointing since it was much easier than the previous four, but even with a lackluster finale, these encounters stand out as the best part of Fox n Forests.

While I was a little disappointed with the final boss, my biggest gripe is with the method to increase Rick’s health and magic meter. Rick collects coins in each stage which allow him to buy upgrades. A couple upgrades can be obtained through regular play, but most of the time I had to replay each level multiple times to increase Rick’s power. Playing a stage a second time is okay, but a fourth or fifth is an unwelcome redundancy that’s amplified when certain parts of each level can only be reached once Rick obtains story-based upgrades from later in the game. It was mildly frustrating, to say the least.

Another annoyance is that Fox n Forests requires finding seeds scattered throughout each level. Finding all the seeds in a given season will unlock a bonus stage to help reveal the magical fifth season. However, after making the effort and finding all the seeds in spring, I opened the first bonus stage to find a coin collecting letdown that could only be visited once! The fifth season is mentioned numerous times during the story, but after the disappointment of the first bonus stage I made no attempt to unlock the others.

While there are a number of small issues holding it back, they aren’t enough to detract from the overall gameplay and fantastic boss fights. it might not live up to the lofty standards set by its 16-bit influences, but Fox n Forests remains an enjoyable platformer with some neat ideas. Rating: 6.5 out of 10

Disclosures: This game is developed by Bonus Level Entertainment and published by EuroVideo Medien. It is currently available on Steam, Xbox One, PlayStation 4, and Switch. This copy of the game was obtained via publisher and reviewed on the Switch. Approximately 8 hours of play were devoted to the single-player mode, and the game was completed. There are no multiplayer modes.

Parents: According to the ESRB, this game is rated E10+ and contains Fantasy Violence. When Rick attacks, enemies usually disappear with a bloodless burst, though some have slightly dramatic death animations. Enemies, especially boss characters, might be scary for the youngest players. In-game dialogue can be a little snarky, but there’s not much else to worry about.

Deaf & Hard of Hearing Gamers: The game’s story is delivered solely through text, with dialogue set aside in a box with a black background. When a character speaks, their name is displayed at the top of the box. Test size is not adjustable. There are no noticeable audio cues that would help gameplay. This game is fully accessible. 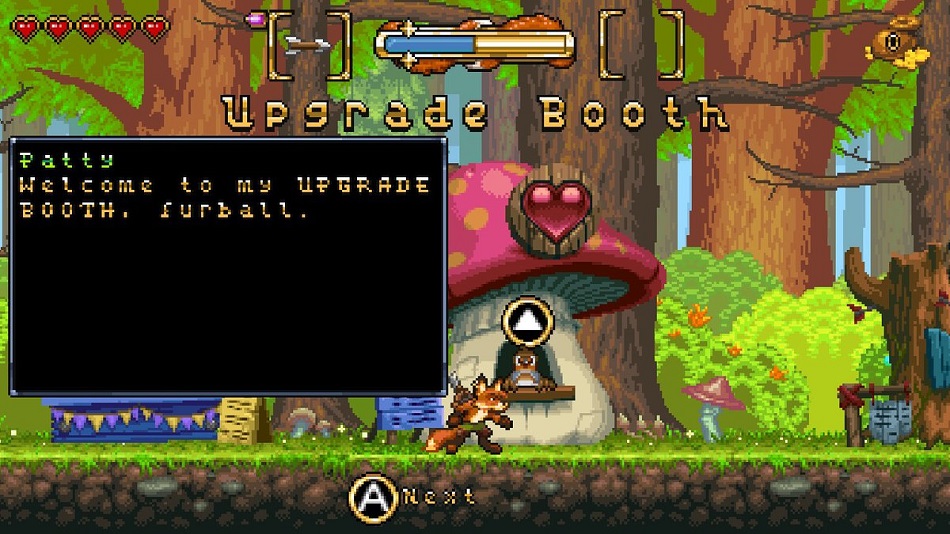 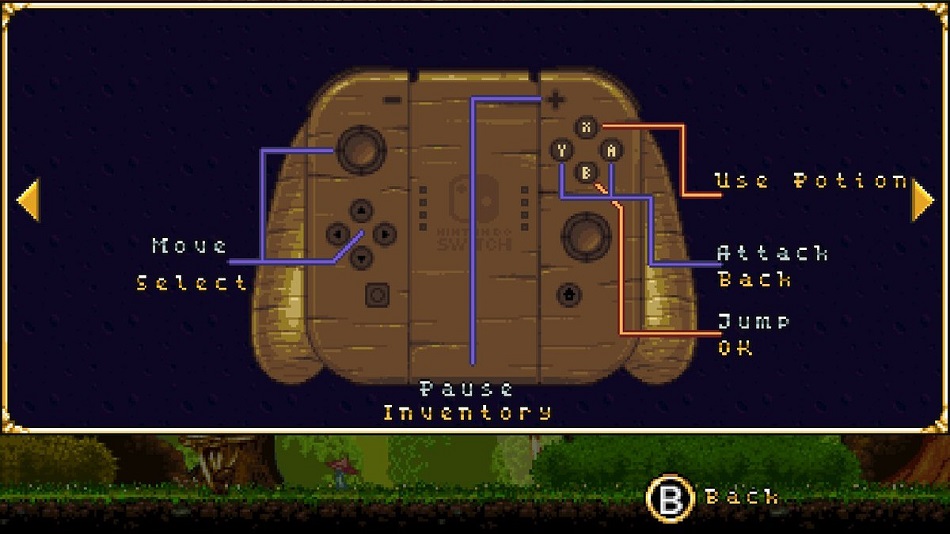 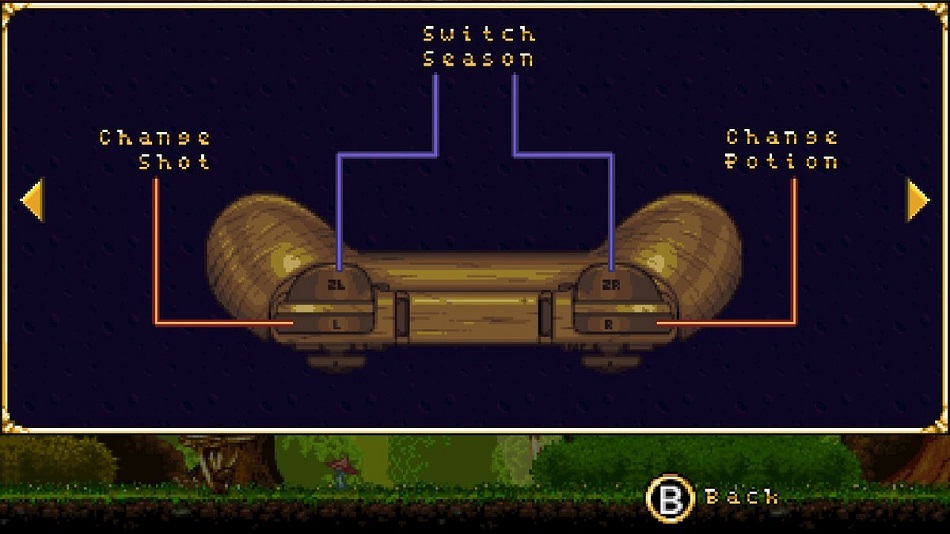