Not All of Ekron is Worth Defending 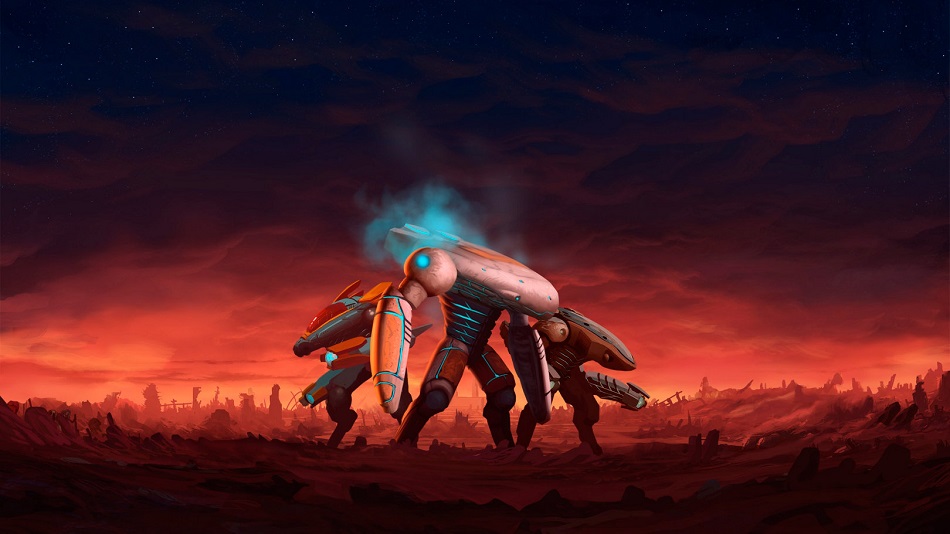 HIGH The early boss fights represent the game at its best.

WTF Why send a soldier with the worst equipment to fight a high-tech war?

Truth be told, I’m not very good at shoot-‘em-ups. I’ve beaten my fair share over the years, but often on the easiest difficulty or after numerous, numerous continues. As much as shmups destroy the pride I take in my gaming skills, I find them a blast to play and always come back for more. Defenders of Ekron challenges that desire for one more round.

Defenders of Ekron is a shmup at heart, but throws in some adventure aspects and allows players to level up their ship. First impressions were positive. The game starts off in a typical auto-scrolling shmup level, with a tough boss fight to end the stage nicely. Even though I died quite a few times, I was enjoying what I was playing. Then I got to the second level.

Stage two introduces the player to some of the adventure elements in Defenders of Ekron. The player’s pilot is named Eneas, and he must navigate a dungeonlike level, passing tests that introduce different skills the ship has. Deaths were still numerous, but now the game tested my patience — I would traverse a whole section of the dungeon and meet the mini-boss with minimal health, only to die and have to restart the whole section. It wasn’t an enjoyable sequence when all I wanted to do was shoot other spacecraft. When I finally obtained victory after multiple attempts, my game crashed.

Sadly, Ekron continued to crash. And crash. And crash. Any time I’d try to load the game from the start screen, an error message would come up. Then, later, I wasn’t even able to access the menu. Luckily this has been patched out since the time of review, but even after the most recent update I still experienced two error messages that required me to restart my computer.

Putting aside the technical issues and the tedious repetition of the second level, I was willing to give Defenders of Ekron another shot. More story is revealed and various people are eventually introduced. The characters have great designs, and while I’m not sure it was intentional, I found the limited facial expressions to be charming in a world filled with too many ‘serious’ characters. Beyond the humans, enemy ships look better the larger they are, and the backgrounds are often worthy of staring at, even in the middle of fierce airborne combat. Overall, the art direction was a high mark for me. 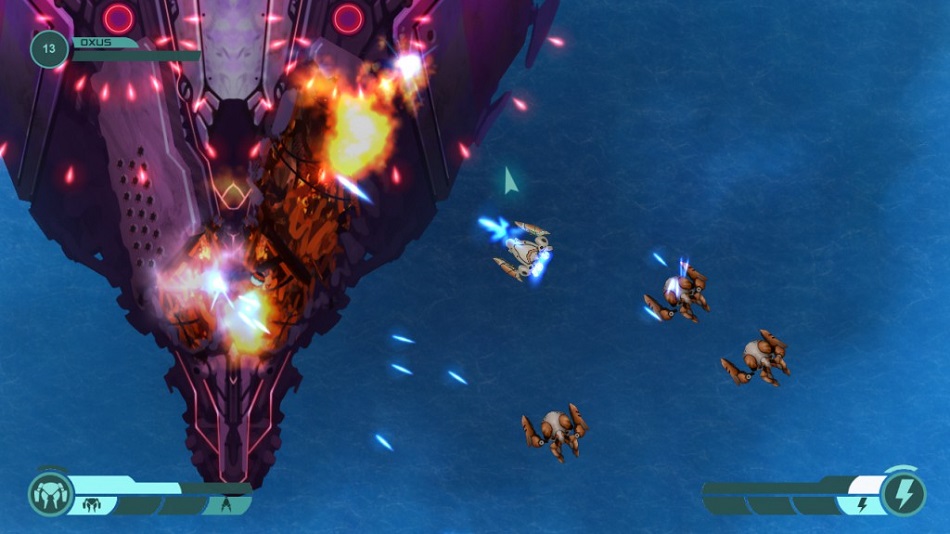 Also, the early boss battles are a joy. My favorite involves a large ship splitting into three parts and being given the option of which of the three pieces to chase after first. All boss fights include a variety of attacks and require multiple strategies to defeat them. Even after multiple deaths, I was rarely discouraged and would jump right back in to give the fight another try. That enthusiasm didn’t hold, though.

The weapon charging system is one thing that eroded my interest.  Defenders of Ekron limits the shots fired by relying on weapons that need to be charged. This requires smart planning and good strategy. However, the player doesn’t have the ability to immediately recharge as needed. Instead, the player must refrain from pressing an attack button for a few seconds, and then after this pause the weapon gauge will begin to refill. Attacking or putting up shields before a full charge cancels any energy that has been regained. The concept here is fine, but giving the player the option to immediately recharge by simply pressing a button would make many dogfights less annoying.

More frustrating than the charging system is replenishing the health gauge. During play, Eneas collects blue orbs from fallen foes. These can be used to level up parts of the ship between stages or to refill the health bar. These orbs are also the only way to replenish health mid-level, and this can only be done after collecting enough to activate the healing function. While healing, Eneas must avoid all enemy shots or risk losing the health he’s gained – especially frustrating because a health refill is often most needed when the majority of shots are being fired in his direction.

It must be noted that death is also not an escape from the handicap of a low health bar. After dying during a boss (which happened numerous, numerous times) I would respawn at the beginning of the fight with the same low health as when I entered. This design decision just adds insult to injury since part of the reason I die is because of starting the battle with low health, so no, I don’t want to keep trying with the same limited resources. I could find a working strategy and scrape out a win during most battles, but as I got further and further into Ekron, this stringency just wore me out.

As the game progressed, the boss battles I enjoyed turned into chores, and while it’s possible to replay levels to earn resources and improve the ship, this type of grinding isn’t something I want in a shmup. Ultimately Defenders of Ekron just didn’t do enough to keep me interested despite great artistic direction and strong beats early on. My desire to defend Ekron ended well before the republic could be saved. Rating: 3.5 out of 10

Disclosures: This game is developed and published by In Vitro Games. It is currently available on PS4 and Steam. This copy of the game was obtained via publisher and reviewed on the PC. Approximately 5 hours of play were devoted to the single-player mode and the game was not completed. There are no multiplayer modes.

Parents: According to the ESRB, this game is rated T for Teen and contains blood, mild language, and violence. The violence is typical shoot-’em-up blasts and explosions. Language is relatively mild, until about halfway into the game when the characters decide to start communicating with four letter words.

Deaf & Hard of Hearing Gamers: Sound cues are not needed to play this game. All dialogue is delivered solely through in game text boxes. It’s fully accessible.