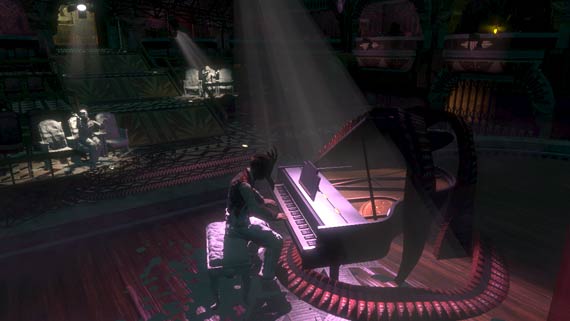 Does the “videogame” label properly capture what videogames have become? Will the term “videogames” still be used 20 or 30 years from now? What other labels might be used? I've been wondering about this lately. Recent titles like BioShock and Mass Effect are pushing games to a realm of narrative and interactive depth that make the term “game” seem ill-fitting. As the boundaries of the medium continue to expand, I suspect that the “videogame” label will only feel increasingly inadequate.

Back in the early days of film, people referred to what they were seeing as “moving picture shows” or “photoplays.” These phrases made sense because they described what then was a relatively new and little understood technology in terms of things that people could understand, such as photographs and theatrical plays. But as films became a familiar part of our culture, the old terminology was abandoned. Nowadays, nobody would ever say they're going to see a “moving picture show.”

So if “videogame” were to go by the wayside, then what would replace it? There are several cumbersome phrases already floating around: interactive entertainment, electronic media. These would never work. What defines games? Interactivity. Gameplay. Electronics. Software. Program. How about playware or playgram or interplay? Actually, I think that's the name of a real company. “Movie” comes from “move.” So how about interactie, or just actie? No, sounds too much like acne.

The term “videogame” can be used to describe everything from Pong to Mass Effect. For my part, I would gladly welcome a new set of terminology that better encompasses or differentiates between these two extremes. Of course, this could never be imposed. Language doesn't work that way. Now that I think about it, however, perhaps my own negative associations with the word “game” are just a reflection of an older set of values, values that will gradually and naturally fade over time. We'll see.

There is good reason, however, to think that the word “videogame” isn't going anywhere. The term has become deeply ensconced during an era of unprecedented information density and penetration via the internet. Indeed, the sheer size and reach of the internet, coupled with the relatively high proportion of it that is devoted to videogames and related topics, probably means that the usage of “videogame” is too deeply embedded and self-sustaining to ever change. But I guess anything is possible.

The label ‘videogame’ is no more a good title as ‘movie’ or ‘film.’ ‘Movie,’ like ‘videogame’ is highlighting the technological breakthrough; “Oh my god, we have moving images.” ‘Film’ is just a description of the technology that stores the information, and gives no hint at the multitude of various art that is produced and stored on that medium. It is funny ‘Talkies’ didn’t stick but ‘Movies’ did. Anyway the labels reflect the technology. And we see that in the productions. Every time some new tech comes out the media focuses on that aspect, then the industries settle down and start… Read more »

I can see the term “video games” being replaced with two terms: sports and movies. Video games that are multiplayer oriented will become televised tournaments and leagues to eventually rival NASCAR and the NFL for popularity, with the best players becoming stars comparable to Dale Earnheardt and Michael Jordan. This will be helped as the gamepad and mouse/keyboard input gets replaced with a full body motion sensor suit and the act of playing video games is physically strenuous (because let’s face it, it’s not much fun to watch sedentary players). Makers of story-oriented games will become more and more eager… Read more »

Interesting read. I actually touched upon this subject in my thesis: http://www.murkes.com/thesis/america-and-videogames.pdf My main problem with the word “videogame” is not fact that it is limiting rather than descriptive. You point out the inability of the word to effectively convey the possibilities the medium has to offer. I agree with that, but there is another issue to consider. The word videogame limits the abilities of the medium to games. If you consider that the videogame industry uses specific talent, tools, and concepts, it is limiting that it is still associated with gaming, while the application of said abilities can be… Read more »