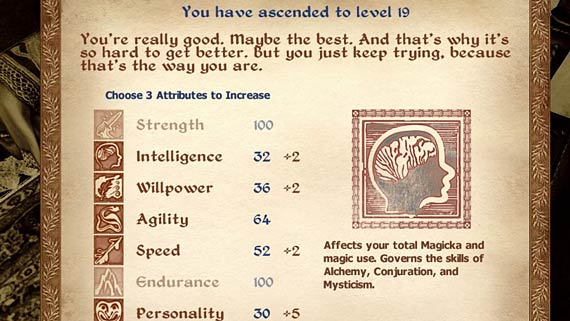 I could be wrong, but it seems like an increasing number of videogames these days are using one or more forms of operant conditioning, and in particular positive reinforcement. (For those who don’t know, operant conditioning is basically the use of rewards and punishments as a way to increase or decrease the occurrence of a behavior—e.g., if a rat gets a food pellet every time it pushes a lever, then it will keep pushing the lever.) Although reward systems have long been a mainstay of the role-playing game (RPG) genre, their use has been gradually spreading.

There are obvious advantages to using positive reinforcement in videogames. Ascending a level in Elder Scrolls IV: Oblivion gives the player a sense of accomplishment and a heightened desire to keep playing. Without that reward, the experience would feel less compelling. A reward system also reassures players that their time will eventually pay off, which is something that games relying on technical skill can’t always guarantee. The player who gets stuck in Ninja Gaiden will be less likely to quit if there is an experience system to fall back on, such as in Devil May Cry.

In God of War, players gain red orbs for defeating enemies, which can then be used as a form of currency to buy weapon upgrades. As players advance, they get more chances to find chests, which contain anything from more red orbs to health and magic upgrades. This system illustrates all sorts of operant conditioning, including continuous, fixed-ratio, and variable-ratio reinforcement (the latter of which is the same addictive principle on which slot machines operate). These systems don’t need to be there, but their presence certainly adds an extra layer of interest.

The weapon upgrade system in Ratchet & Clank: Up Your Arsenal had a lot to do with why I played that game as much as I did. Resident Evil 4 has its own weapon upgrades. Burnout Revenge awards players with new cars and tracks for collecting stars, and even Shadow of the Colossus—often noted for its minimalist design—employs its own reinforcement schedule in the form of health and stamina increases. The list could go on, but suffice it to say that operant conditioning is reaching the point of being a design imperative for a number of developers.

What still puzzles me about all this is why it works as well as it does. There are very few primary reinforcers (e.g., food, water, sex, etc.) in the world. According to traditional behavioral psychology, a so-called secondary reinforcer (e.g., money) only works through its association with primary reinforcers. Leveling up a character in a videogame, however, doesn’t seem to have any clear connection to getting food and water. Nevertheless, many gamers (myself included sometimes) feel a strong compulsion to build the strength and stats of their characters.

Of course, positive reinforcement in videogames doesn’t work with everyone. Some people find leveling up in RPGs incredibly tedious and repetitive. Maybe what’s going on with people who respond well to these rewards systems is that they get greater than average satisfaction from completing challenging tasks, which in turn releases adrenaline. Or maybe these people just have a looser grip on reality when immersed in a game. For them, earning virtual gold may still trigger some of the same chemical pathways that would be triggered by getting money in real life.

Whatever the underlying neurochemical basis, however, it’s clear that developers have fallen in love with these positive reinforcement systems. This isn’t necessarily a problem in and of itself. The problem is when these systems are shoehorned into games in which they really don’t belong. When RPG-type elements are senselessly added to a game for the sole purpose of lengthening the experience, then the overall product usually suffers. Positive reinforcement is just one of the many tools at a game maker's disposal. There’s a right way and a wrong way to use it.

Hence the practical reason cannot contain, in reference to such an object, an absolute prohibition of its use, because this would involve a contradiction of external freedom with itself.

Hi there, Interresting, you could be right about the neurological implications. Also, what do you think about people who like playing games? I mean, isn’t playing video games like other activities like social activities or sports? I mean in the sense that we enjoy doing them for a number of reasons, which, can involve feeling better about ourselves, expressing ourselves, maybe also “forgetting” about what’s difficult in life, I didn’t really mean escape reality completely, at least only for let’s say once in a while you know? When I play squash every saturday, I forget about everything for an hour,… Read more »