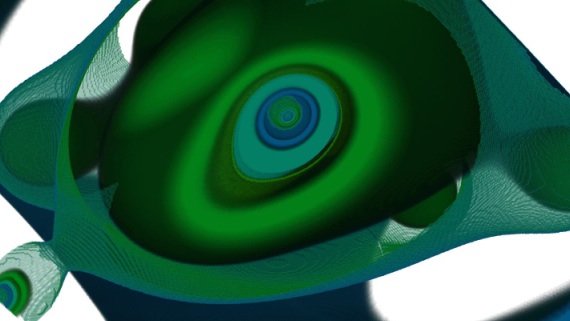 For most people, the idea of "virtual reality" probably conjures up images like those from The Lawnmower Man or The Matrix, with a heavy emphasis on visual realism. The upcoming May issue of Computers in Human Behavior, however, looks at the rather foreign concept of nonvisual virtual reality in an article entitled "Construction of cognitive maps of unknown spaces using a multi-sensory virtual environment for people who are blind." From the article:

"Current virtual reality (VR) technology facilitates the development of rich virtual models of physical environments and objects to be manipulated, offering people who are blind the possibility to undergo learning or rehabilitation processes without the usual constraints of time, space, and the massive demand of human tutoring."

The study took a group of blind people and had them explore either a virtual environment (enhanced by audio and haptic feedback) or an identical real environment. The idea was to see how well the participants did at forming a cognitive map. Interestingly, although it generally took the subjects longer to get oriented in the virtual space, those who explored the virtual environment actually developed more comprehensive mental representations. As summarized by the article:

"A detailed examination of the verbal descriptions shows that those generated by participants in the experimental group were more elaborated and specific about particular components (e.g., "the first door – entrance door" or they specifically referred to windows and pillars) than those produced by the control group."

Considering that the participants probably felt safer moving around freely within the virtual environment, this kind of makes sense. This has me wondering if something like this could ever find its way into a videogame. Personally, I'd love to see a game that includes a section in which players are forced to find their way around in complete darkness, relying only on audio and force feedback. I'm not sure how that could be done effectively, but it seems like a cool idea nonetheless.

“Personally, I’d love to see a game that includes a section in which players are forced to find their way around in complete darkness, relying only on audio and force feedback. I’m not sure how that could be done effectively, but it seems like a cool idea nonetheless.”

Hey, the first thing that came to mind was:
Implement that in a survival horror game a la RE, SH or AITD, and I’m sure you’ll freak the heck out of a lot of gamers ;D

A quick search on Google can find you a whole slew of cool games for the blind. Pac-Man Talks (a version of Pac-Man for the blind in which you wander around the maze relying on audio) sounds almost just like what you were describing. You can (and I highly recommend you do) check out the demo here – http://www.pcsgames.net/pacman.htm I can’t really get a grip on how to play it well (it’s pretty complicated), but playing it with headphones on and my eyes closed and running towards and away from sounds is pretty awesome in its own bizarre way. There’s… Read more »