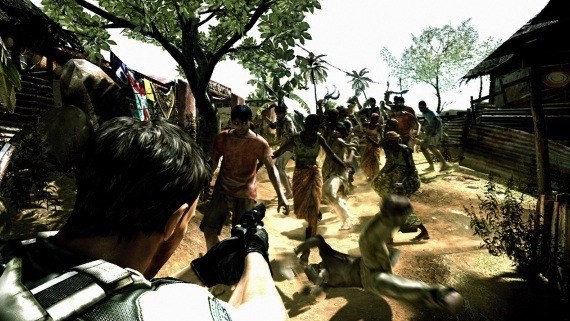 While videogame technology has been used before to model enemy behavior in military training simulations, it has yet to be applied to modeling the behavior of noncombatants in war zones. But that's all about to change thanks to Dr. Frederick McKenzie and his colleagues, whose research is presented in the March issue of Simulation & Gaming. Their work, sponsored by the Defense Modeling and Simulation Office, the Air Force Research Laboratory, and the Joint Forces Command, uses the commercially available AI.implant software to incorporate realistic crowd behavior into a military simulator.

From the article: "Crowds of noncombatants play a large and increasingly recognized role in modern military operations…However, in spite of their potential significance, realistic models of crowds are essentially absent from current military simulations." Indeed. Regardless of one's personal feelings about war, I think that most of us could agree that anything that leads the military to think more about civilians is probably a good thing. Conceivably, better simulations of civilian behavior could produce soldiers better trained in how to avoid killing them. So much for the notion that games are kids' stuff.

The article describes how the researchers integrated the AI.implant software into the Joint Semi-Automated Operations military simulator to recreate portions of the Mogadishu incident (popularly portrayed in Black Hawk Down) in which groups of Somali civilians blocked a large convoy of U.S. military vehicles. With the help of AI.implant's artificial intelligence routines, the test simulations produced realistic scenarios in which crowds of noncombatants disrupted vehicles and became increasingly hostile. While most of the test runs went smoothly, the results for test run 7 were a tad disturbing.

"In this run, a crowd of 200 civilians was generated. Crowd Federate interoperability with OTBSAF was demonstrated by interaction with military police entities. The interaction resulted in military police firing into the crowd, resulting in an increase in crowd aggression level. The OTBSAF entities sensed the crowd entities initially as neutral, then as hostile. This was also a welcome new capability for the users, as they were able to accomplish an exercise master scenario event list (MSEL) item."

The authors don't bother to explain what a "master scenario event" is. I find it more than a little unsettling, however, that "military police firing into the crowd" was deemed a "welcome new capability," unless of course they mean it as an example of what not to do. The preceding scenario notwithstanding, this line of research strikes me as incredibly fascinating. Let's just hope it can be used for good.

What is considered “intriguing” is the response of the AI, not that MP’s fired into the crowd. The MESL likely was initially the MP’s doing just that, but the event generated was a great teaching point because never before was a program able to automatically turn from “neutral” to “hostile”. In addition, it is training such as this that prepares our soldiers to handle “incidents” – I assure you, the military is NOT teaching its soldiers to just “fire into the crowd”, though we all know that accidents happen – this MESL is just a way to introduce such an… Read more »