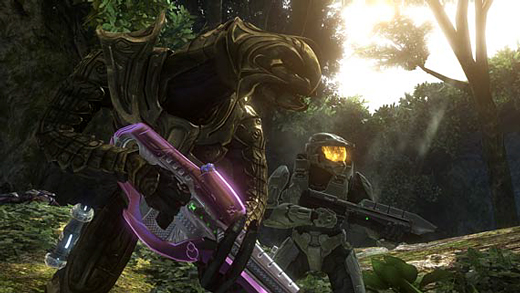 As a videogame critic, I feel in some ways obligated to familiarize myself with the most important works in the gaming medium. Just as English literature buffs should be knowledgeable about the heavyweights of the Western canon—Macbeth, Huckleberry Finn, Ulysses, etc.—so too should videogame critics be acquainted with gaming's megahits, games like Super Mario Bros., The Legend of Zelda, and, yes, the Halo series. So, like the English lit student who struggles to wrap his or her head around Ulysses, not because it's enjoyable but because it's important, I decided that I should at least try to understand Halo.

Unlike literature, understanding a videogame isn't about reading up on it or analyzing it on an academic level. It's about playing it. Now, I first played the original Halo about two years ago. After reading all the insanely high praise on Metacritic, I decided that it was time to see what all the fuss was about. But the experience proved to be a bit of a letdown (more on this later). Maybe I had arrived too late. Maybe it was because, as I had read, Halo isn't really about the single player. But lacking Xbox Live access, I soldiered on and beat the game on the easiest setting. Lame, I know. But hey, I was new to first-person shooters.

Despite the fact that Halo hadn't exactly blown me away, I decided to move on to Halo 2. After all, the reviews were generally positive. Sure, people complained about the abrupt ending, but it looked promising. In any event, I never actually finished the game, not because I didn't find it at least slightly enjoyable, but because I couldn't figure out how to beat this big white-haired boss monster towards the end of the game. Yes, I'm lame. I know. Despite my cop out, however, I actually enjoyed Halo 2 more than the original. Everything looked a little nicer. The fights were just a little cooler and flashier. But I still didn't really get it.

So having left the Halo series behind two years ago, I decided that it was time to give Halo 3 a try. I'd seen it on several occasions sitting on the rental shelf at Blockbuster. Since I hadn't yet used my free game rental pass for January, I figured I might as well give it a go. But wait, I still hadn't finished Halo 2. Gotta have continuity, right? So I popped Halo 2 into my Xbox 360 thinking I could pick up where I left off, only to realize that my original game data was in my inaccessible stored-away Xbox. Dismayed by the prospect of having to start from the beginning, I finally said “screw it” and fired up Halo 3 anyway.

As of right now, I believe I'm at the end of the sixth mission (out of nine) or thereabouts, and I've been playing on the recommended “heroic” setting. The verdict? I'm not terribly impressed. Yeah, I know the multiplayer is supposed to be the main draw, but after having recently been subjected to the idiotic trash talking on Call of Duty 4 online, and figuring that Halo 3 players would probably be just as bad if not worse, I frankly don't really want to try Halo 3's multiplayer. That being said, my complaints against Halo 3's single player campaign are pretty much the same as my complaints against the series as a whole.

First, the graphics aren't that great. Halo 3 looks okay, but for such a hyped title, I would have expected some much more impressive visuals. Second, the guns lack punch. The weapons in Call of Duty 4 are much more fun to handle. Third, the enemies suck, and I'm not talking about the enemy AI which, from what I understand and from what I've experienced, actually seems pretty good. But the way the enemies look and talk is completely ridiculous. They come off like some dimwitted teenager's conception of what an alien should look and sound like. The enemies in Halo say stupid things and they sound stupid saying them.

Some fans say that if you haven't played Halo's multiplayer, then you haven't really played Halo. Given how much praise the Halo series has received and how insanely popular it is, I sincerely hope that this is true. I only have a couple more days until I have to return the game to Blockbuster, and I don't care all that much if I finish it. I still don't get the Halo series, which is to say that I don't like it all that much and I don't see why it's so big. Who knows, maybe someday when I've developed a high enough tolerance for idiotic teenage trash talking I'll try the multiplayer. But for now, it doesn't seem worth the effort.

I wrote an article some time ago on Halo’s historical significance. It’s basically an attempt to explain why the game is so important, so I thought I’d link it for you. Enjoy.

I went through a similar journey not long ago. “What could my Xbox-owning friends possibly see in this game?” I asked myself. So I played through all 3 games in succession (fudging my way through Halo 2’s frustrating end boss by bringing along a vehicle) to see if I could appreciate it. There are two main factors. First, Halo is extremely user-friendly. Recharging shields, bright colors, a variety of vehicles, and a nice long single-player campaign to ease new players in combine to make an experience that makes anyone feel, “I could probably do that,” regardless of how bad they… Read more »

For some reason, Halo seems to be a safe choice for discussions like this. Naturally every game is going to have some people who just don’t enjoy it for some reason. Personally, I’ve been trying to understand the popularity of certain Nintendo franchises for years. In particular, I own and have played parts of numerous Legend of Zelda games and find them to be largely uninteresting. To some degree, I feel the same about the Metroid franchise. For some reason, however, those series have rabid fanbases and anyone who criticizes them is mercilessly attacked. I guess on the internet, you… Read more »

Good response. I didn’t mean to equate bias with close mindedness, I just meant to point out that you can’t acknowledge your own subjectivity while criticizing someone elses. While this is a commonality, it risks sounding hypocritical. But that aside, it’s true, you always hope for critiques to be more expansive than they often are, and we must hope that if this were Erickson’s review of the game, they would be. Alas, it’s just a blog, a quick insight of his personal thoughts and experiences we gotta accept as bias from the get go. At least we’re smart enough not… Read more »

Goatart, you’re surely correct about the multiplayer in Halo 3 being well worth playing (I never said it wasn’t) if you’re into that sort of thing, which I am not (and last time I checked, personal preference has nothing to do with “close-mindedness”). And I agree completely that Halo 3’s story isn’t particularly good (again, I never said it was or even mentioned it in my post). Finally, I sympathise with your general concern about the “been there done that” factor in gaming. Guess that makes me jaded and cynical after all… That said, I find Erickson’s criticisms of Halo… Read more »

Are you saying that if you played a game in which you didn’t really care for the look of it, you didn’t really like the weapons you were using, and you got really annoyed by the lame dialogue and story, you’d still what? like the game? Rather than take the blog as an opinion piece, which is what it is, you read it as some sort of objective critique. The title of the blog is “Trying to Appreciate Halo.” Clearly he gave it a shot, and to what seems like his dissapointment, he doesn’t get what the big deal is… Read more »

If relatively minor concerns such as the design of the enemy character models and their speech, the fact that the graphics aren’t the most technically impressive around (although Halo 3’s visuals are undeniably closer to what really good-looking titles such as “Mass Effect” and “Crysis” has to offer than most other recent games) and a general dislike of the weapons is enough to ruin Brandon Erickson’s gaming experience, then he truly deserves the title of gameCRITIC… Admittely, “Halo 3” is by no means a milestone in FPS gaming, but the game’s enemy AI is respectable (as Erickson himself admits), the… Read more »

In order for one to realize this all they have to do is play the extremely frustrating, insanely irritating and infinitely ugly library level. Corridors with blurry textures go on forever as little paper mache brown squids and Half-Life zombie rip offs attact you. I almost turned off the game for fear of going blind with hatred but my friends insisted I move on and the game did get better but not by much. Playing Halo reminded me of playing any Star Wars FPS, fine but ultimately forgettable. I don’t get it either. If you wanna play any original XBOX… Read more »

I think we, as gamers, have to accept that some games are going to be inexplicably popular even when, to us personally, they seem like a waste of time. I could name quite a few games you couldn’t pay me to play that have sold in their millions (and that have devoted fans who would, without a second thought, have the games babies if it were biologically possible.) That said I am a Halo fan. I loved the original Halo. It was a great game ( and I’m talking Halo on the Xbox not on the PC and, what’s more,… Read more »

It’s true. I was really really into halo 2…for the multiplayer. But it’s so true…the story is lame. I really don’t get the fascination…the books that have spawned…the movie, the utterly huge fanbase, etc. But the multiplayer is fun…well balanced, fluid. At least in 2. I’ve played three, but was overwhelmed by the “been there done that” sensation that after a while I forgot all about my desire to play. Plus COD4 is just…something else. Even Unreal Tournament 3 is more fun, despite its insanity. At least it brings what feels like something new to the table, even if it… Read more »