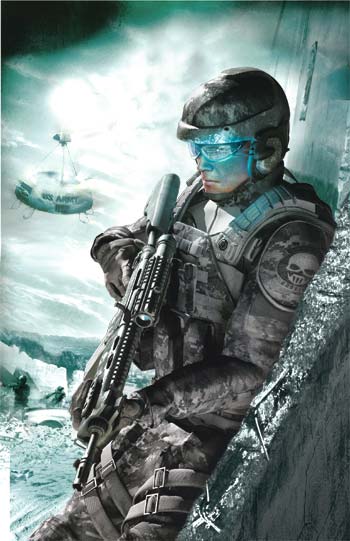 Ghost Recon Advanced Warfighter was easily one of the most polished games on the Xbox 360 when it was first released back in March of 2006. Set in 2014, players took control of a captain in charge of a group of advanced soldiers called Ghosts. While the gameplay wasn't particularly earth shattering, it did feature an interesting—albeit cumbersome—array of high-tech gadgets and support features (e.g., night goggles, tanks, helicopters, etc.), which combined with its cool over-the-shoulder perspective and top-notch graphics made it a great showcase for the Xbox 360. A few small tweaks and additions aside, Ghost Recon Advanced Warfighter 2 (GRAW2) offers essentially the same experience as the original, though with a shorter campaign. Unfortunately, it also shares the same fundamental weaknesses—namely, unwieldy controls and unsatisfying shooting gameplay.

The action centers around Ciudad Juarez and El Paso, with players once again filling the shoes of captain Scott Mitchell, fresh off the Mexico City campaign that comprised the first game. The story, relayed via video feeds inserted between the fighting, involves the U.S. military's secret effort to put down a group of rebels and track down two stolen nukes. The meager plot details usually got lost somewhere between my eardrum and my cerebral cortex, with the only surviving bits being instructions on where to go, whom to kill, and what to blow up—that, and a vague awareness of being continually shouted at by my superiors or getting congratulated on my "damn fine soldiering." Overall, the threadbare story was of little interest to me, and for the most part, my primary concern was with following the ever-present yellow square on the screen indicating where to go next. 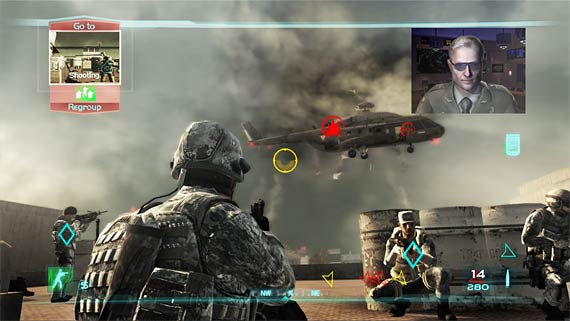 In terms of its control scheme, GRAW2 is one of the least accessible action games I’ve ever played. In addition to directly controlling Captain Mitchell, players also give orders to as many as five other soldiers, a tank, a helicopter, and several other support vehicles. This is at best an enjoyable challenge and at worst downright confusing. With buttons often serving multiple functions and a frequent need to quickly switch secondary control frames between different people and vehicles, it can be easy to make unintended errors, such as moving one's teammates into enemy territory when the intent was to send a reconnaissance device. Even as the controls start to become second nature, the system often seems awkward and tedious. In stark contrast to the challenging control scheme, the underlying gameplay feels comparatively simple.

After getting past the formidable controls, the gameplay starts to feel surprisingly easy. With few exceptions, GRAW2 mainly consists of moving from checkpoint to checkpoint (always conveniently indicated by a yellow square), and shooting rebels or blowing up enemy equipment along the way. This pattern wouldn't be so bad in and of itself if the shooting combat weren't so shallow. The lackluster enemy A.I. makes most firefights a breeze, and half the time the player can simply order the other soldiers to shoot the enemies themselves. For a game that offers such a wide variety of guns, the actual shooting can feel rather dull and unvaried. Some players may appreciate the forgiving aiming system and simplistic enemy A.I., but I personally would have liked a more robust and compelling core shooting experience. 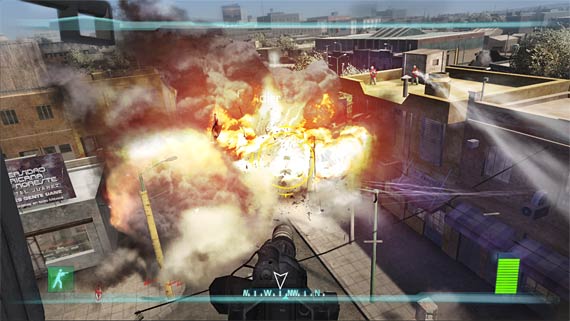 The graphics in GRAW2 are superb, and represent some of the best visuals to be found on the Xbox 360. The environments, which range from mountains to deserts to large urban centers, are wonderfully detailed. The cities in particular stood out to me for their near-photorealistic quality, and several times I found myself stopping and looking around at the subtle colorations of the clouds, the undulations of heat waves, and the light from fires and explosions at night. The characters at times have a slightly uncanny toy-soldier look, and it did strike me as odd that there were never any civilians walking around, but these minor gripes did little to detract from the game’s incredibly polished look. Rounding out the outstanding presentation is a solid soundtrack that enhances the action without drawing undue attention to itself.

I came away from GRAW2 with mixed feelings. When I’m playing a shooter, I don’t want to be simultaneously micromanaging five other things on top of controlling my own character. Instead of forcing players to guide the actions of so many different people and vehicles, the designers would have done better to remove some excess layers of player-controlled support features while making the mission objectives and shooting more intrinsically compelling. Without a doubt, GRAW2 has its share of great spectacle, such as when I was caught in a firefight in a dense urban area and made it out by calling in an airstrike. But despite its graphical flair and fancy high-tech features, the hollowness and simplicity of the core gameplay ultimately left the experience feeling unbalanced and unrewarding. Rating: 6.5 out of 10

Very good review. I’m really surprised that this is considered a sequel at all. It’s just a polished version of last year’s game with a few gameplay and graphical tweaks. GRAW 1.5 seems more apt.

Good review. I agree wholeheartedly, and I probably would score it even lower. The controls were forgiveable in the first game, because the shock and awe of the presentation hadn’t quite settled yet. But like a war that’s worn out its welcome, I began to wonder what the point of this whole affair. if the Ghosts were fighting in a real war, you can bet they probably would be shot dead while tinkering with their headset or helicopter or buggy. They would be killed, if it wasn’t for the stoopid AI. All in all, the Advanced Warfighter series has worn… Read more »

THIS GAME IS THE BEST GAME EVER I AGREE ON THE CAMPAIGN I DON’T REALLY LIKE IT BUT YOU SHOULD TALK A LITTLE BIT MORE ABOUT THE ONLINE GAMEPLAY BECAUSE IS AWESOME ONCE YOU REACH TO THE TOP OF THE RANKS BELIEVE ME YOU ARE OING TO FIND BIG CHALLENGES SO I GUESS YOU SHOULD BE MORE FAIR WITH THE COMMENT AND ALSO DON’T EMHASIZE ONLY ON THE CAMPAIN!!!! OK IF YOU EVER PLAY ONLINE LOOK FOR xxD34THR0Wxx THE O IS A ZERO AND HIT ME UP ANYBODY I’M A RANK 13 SO FAR OK GOOD LUCK