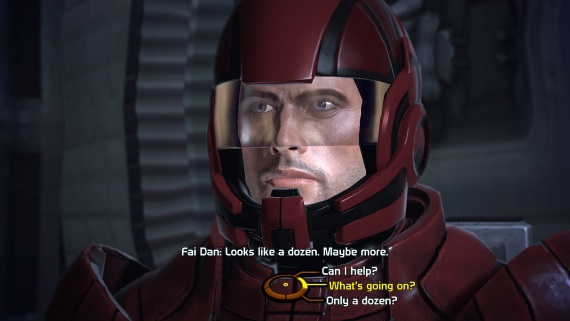 I have a difficult time making choices in videogames. Usually this isn’t really much of an issue. Most games don’t ask players to choose one path or response over another and thereby close off a particular area or sub-story. On some level, I still cling to the idea that giving players multiple story paths from which to choose and more ways in which to shape their own experience represents an important part of gaming’s continuing evolution. Nonetheless, I have a tough time making choices.

I was reminded of this while playing Mass Effect last week. While pursuing one of the game’s many side missions, I spoke to one of the characters in such a way that the mission became permanently closed off. As soon as I realized what had happened, I felt disappointed. I wanted to be able to go back and do things over, but I couldn’t without starting a new game. The mission that I missed wasn’t crucial to the overall story. So why did it even matter to me whether I completed it?

Many gamers—myself included oftentimes—have a perfectionist or completist tendency. In other words, it’s the desire to experience every single morsel of content a game has to offer. Games cost money. They’re products. We consume them. So it makes sense that a lot of gamers would want to squeeze every last drop of content out of their investment. For me, the completist tendency certainly contributes to my difficulty. But I think there’s more to it than that. In a way, it’s an existential issue.

Life is about choices. If people lived forever, then there would be no reason to think about decisions. In fact, decisions would be kind of meaningless. If we never died, we wouldn’t have to choose between possible decisions because eventually we’d be able to make every decision. I think that making choices in games represents sort of a microcosm of this larger issue. It’s hard for me to choose one path or response in Mass Effect because on some level I wish I could choose every response.

Making life choices is hard, because while it opens up doors, it necessarily involves closing others. But choices are what give life meaning. Of course, videogames aren’t real, and the choices we make in them don’t have significant ramifications in the outside world. But in a watered down way, I think that these existential issues do enter into how we deal with choices in videogames. Confronting players with hard choices may be one of the best ways to make games more meaningful.

Regular readers of my blog already know that I believe wholeheartedly in the artistic potential of videogames as a medium. I’m also beginning to believe that it will be increasingly important for players to develop a tolerance for ambiguity when it comes to making choices in videogames. I think we should all seek to be more comfortable with not following every virtual path or living every virtual life. Doing so may trivialize the experience created by our own unique interaction with a game.

“the idea of selling future shorts like these for reduced prices is definetly enticing. That way you can purchase more games fulfilling my variation desire, simultaneously paying less, or as much for just one game…” Guess it’s potentially a win-win situation for gamers 😉 Good point about the desire of variation. “But we’re getting a little tangential as this all erupted from a blog on “choice” in videogames. We’ve digressed to talk on personal choice of games…interesting.” Well, to defend ourselves ;-), certain types of games have traditionnaly had more of a “choose your path” thing than others, so if… Read more »

Oh yes, that is a great package…bang for your buck, and varied. Even though they are all connected (Portal more “spiritually” than actually), you feel like youre playing different games. The episodic nature definetly allows you a sense of “space” between each game, while again, still being connected. And then on top of that Team Fortress Two is an apt multiplayer game, not the best, certainly not the worst. I know I’m talking about the games as a package, but the idea of selling future shorts like these for reduced prices is definetly enticing. That way you can purchase more… Read more »

Good point, if it’s too short there can’t be too much room left for choice and different paths to explore…

I guess it’s up to the gamer to choose what type of games he/she wants to play then lol, fps? rpg? other? long or short? etc…

Good thing though there is choice out there.

About shorter game types, have not tried them yet but what about HL2 and all the HL2 ep1 and ep2 ?? Not to mention portal.
I think episodic content is a good alternative for players who want shorter games that are also less expensive.

The only conundrum presented through what the above posters have suggested (and I wholeheartedly agree with them) is that a short game, by its very nature, while potentially being dense (like Heavenly Sword, like COD4), and replayable, must eliminate a lot of the “choice” factor precisely because it is short. If choice is a big factor in the game, it is by that same token pretty much gauranteed to be long. I do understand though, the annoyingness of getting screwed out of being able to play a certain section because of saying something wrong. Oh that happened to me in… Read more »

“I like a degree of “choice” in games, but I prefer that in shorter games with a good amount of built-in replay value. I don’t think longer games should have “missable” items or areas to explore.” Good point, what do players want? an excellent 8 hour game with very good replayability? Or a 20 hour game, with poor to no replayability? Considering that a lot of gamers are above 20 and don’t have the time anymore to play as much as when they were younger… maybe a good 10 hour game with good replay is less expensive to make than… Read more »

Yeah, I definitely understand this. I still haven’t got through Final Fantasy III on the DS simply because it forces you to essentially choose what jobs you want to level up and stick with a select few. Sure, you could use them all, but then you’d end up being terribly weak in all of them (unless you spend countless hours leveling them all up). The game design essentially punishes you for experimenting. I like a degree of “choice” in games, but I prefer that in shorter games with a good amount of built-in replay value. I don’t think longer games… Read more »

Whoops, forgot to say, about that replayability thing, you’re wrong in one way:
the diff between real life and games is that while in real life you can’t go back on most things and relive them > in games you can, just play it again when you feel like it, and this time choose to play it differently, choose a different path.

Hence, the added replayability, more bang for the buck, etc…

That’s why games like Deus Ex, Mass Effect and others stand out.

Very interresting article. Clearly a lot of gamers would agree to what you’re saying. On a side note, I haven’t played Mass Effect yet, don’t have a 360, but here’s really hoping the game will come out on PC (will it ever? Is that a dumb question?). Reminds me of Deus Ex, how you could choose paths that had a major impact on the story, these were sometimes tough decisions to make but in the end you chose your style of playing the game and interracting with the world. Do you think that if developpers were to pursue this road,… Read more »