Before starting this review, let me make one thing clear: I’m not a golfer. I’ve played miniature golf a handful of times over the years, and I even played a single round of real golf once when I was a kid, but that’s pretty much it. Who knows, maybe I’ll take it up someday when I have the time and money. For now, the fact remains that I’m not the best person to judge the accuracy of Tiger Woods PGA Tour 08. That being said, I do consider myself something of an authority on what I find fun. Although swinging the Wii remote like a golf club in Tiger 08 may offer some brief enjoyment at first, the overall experience is primarily one of profound annoyance and frustration.

The central issue that plagues Tiger 08 for the Wii—the problem that no amount of visual gloss or fancy game modes can alleviate—is its inconsistent and imprecise motion-sensing controls. To succeed, players must be able to effectively manipulate both the power and direction of their shots. Sadly, it is in just these areas that the game is most unsuccessful. Initially, Tiger 08 fares well against the golfing in Wii Sports (the game that most players will compare it to) in that the onscreen swing seems to replicate arm movements with far greater completeness and subtlety. The game’s flaws become painfully apparent, however, once players start trying to gain control over the ball.

By far the most maddening aspect of Tiger 08 is its poor implementation of draw and fade shots (i.e., shots in which the ball curves slightly to the right or left). In theory, draw and fade shots are performed by rotating the Wii remote to the right or left before taking a swing and then maintaining the rotated position throughout the swing. In practice, I was only able to successfully carry out either of these shots around 50 percent of the time at best. To make matters worse, the game has an annoying tendency to interpret straight swings as fade shots. If the developers couldn’t come up with a more reliable system for pulling off special shots, then they should have left them out altogether. 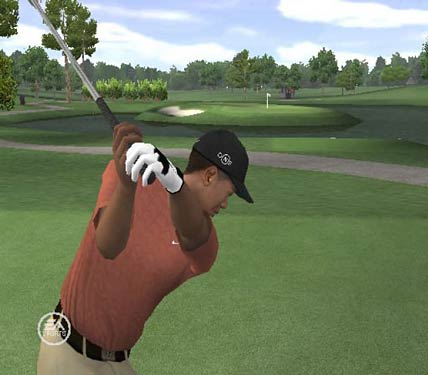 Almost as vexing as the sloppy draw/fade mechanic is the game’s inaccurate detection of swing strength. Power is determined by a combination of controller speed and the height of the front and back swing. Unfortunately, the game can’t seem to differentiate between anything beyond a medium-speed movement. Getting a shot to register at under 100 percent often requires moving at ridiculously sluggish speeds. I may not be a golfer, but I’ve studied physics, and hitting a golf ball in slow motion shouldn’t send it soaring 300 yards. Having to swing the Wii remote in a way that seems to fly in the face of common sense makes me feel like giving up and reverting back to a standard controller.

Fortunately, matters become less baffling once the ball is on the green. In putting mode, players can actually gauge the swing power using an onscreen meter. While the physical movement of the remote doesn’t exactly reflect the experience of putting, the strength meter at least affords a welcome degree of control. Overlaid on the green is a square grid with moving dots on the gridlines indicating which way the ball will roll in a given area. The dots and lines are somewhat useful for planning which direction to hit the ball in, but it makes the screen look too busy and cluttered. It would have been nice if the developers could have found a more natural way to convey the contours of the green.

I was really hoping that Tiger 08 would satisfy my desire to have a polished and refined golfing experience that uses the Wii remote. Wii Sports hinted at the possibilities, but still left a lot to be desired in terms of graphics, variety, and gameplay. Tiger 08 delivers realistic visuals and a wide variety of courses, but at the end of the day a golf game for the Wii is really only as good as the precision and reliability of its motion-sensing controls. With its frustrating and inconsistent gameplay, however, Tiger 08 is (much as I hate to say it) way under par. I’m no golfer, but if this game is anything like the real thing, then I think I’d better find another hobby to take up after I retire. Rating: 4 out of 10

Anthony Fernando fired a three-under-par 69 to propel the Philippines to a first-round lead Monday in the 24th Southeast Asian Games with a 209 total. Jonel Ababa and Ferdinand Aunzo shot respective 70s to bolster the Philippines’ bid to defend the SEAG Gold the team won in the Manila Games in 2005. In the first day of competitions at the Bonanza Ranch Khaoya in Thailand, the Philippine surge took the team above second placer Indonesia by one shot. Malaysia ended the day at third with a 212 aggregate. Meanwhile, Putra Cup champion Thailand languished at fourth place with a 214… Read more »

I’ve been playing Tiger 08 for the Wii for over a month now, and his points about the shortcomings of the controls are dead-on correct. Hitting a draw reliably is tough even with a lot of practice. Hitting at less than 110% power and without a fade is very difficult, so the player needs to adapt (sort of like in real-life, I’ll admit). Hitting from just off the green takes a lot of finesse. Putting is so much less than it should be, with the wire frame representation and the running lights. EA should have taken that code and refined… Read more »

I think I used a reserved character that clipped my post. Here’s the rest:

…If it is in less than 90% rough, then I switch shots (with the 1 button) and clubs, since I can never get enough power with a chip shot.

After more experimenting and reading some other reviews, I’ve pretty much reached the same conclusions you have. If I’m on the fairway or other 90+% terrain, the swing is so sensative that it’s safer to change clubs so that the shot is falling short of the hole and give it a full swing (which will be 100-120% every time). If it is in <90% rough, I've been switching swings (with the 1 button) and clubs, since I can never get any distance at all with a chip.

Yeah I’ve been playing and I believe chip shots are based strictly on speed of swing and the rough. The height doesnt matter much and you dont swing high on those anyway you kind of chop at it. And if the rough is under 90% you gotta chop really hard. Otherwise if its over 90% you hit almost like you were on green.

I’m not a real life golfer, but have been playing Wii Sports golf and Tiger Woods golf for a month or so now. While I agree with the above reviewers on most points, I do feel that I’ve gotten driver, iron, and putt shots down to the point where they are relatively predictable, if somewhat coarse in their power control. The chip shot, however, still has me completely baffled. For power, the driver and iron shots work on a combination of both height of the back swing and acceleration, while the putter is strictly height of the back swing. What… Read more »

I’m not an experienced Golfer, but do know some of the theoretical mechanics. With a little practise on fluent motions and not so much “Baseball-batt” to your swing, you could get a fairly good controll of your game. The biggest problems I’ve encountered with the game is the lack of indication towards what different enviroments will do to your shots (distance, direction and loft in Bunkers, Rough etc.), and also a lack of indicators on how “bad” the particular rough you migh find yourself in is. Also it is worth to note how your settings on your characters “swing” is.… Read more »

Well, I’m the opposite of the prior reviewers: a very experienced 6 handicap golfer (who’s been to St. Andrews several times, and a few of the other courses depicted in the game), but not an experienced gamer. I found the hardware very easy to set up and everything worked immediately. The Woods game is moderately disappointing and outright annoying in several respects, however, from both a golf and a gaming perspective. I think the graphics are just awful. Grass, sand, water, landscape, and surroundings are all flat and bland and look like every corner was cut just to throw the… Read more »

As a real life golfer, your review reads like a novice golfer who is struggling to learn the game. It is an extremely difficult and frustrating sport. Most recreational golfers cannot hit a fade/draw correctly, and the majority of people hit an unintentional fade (aka slice) on nearly every shot. Most novice golfers also have a problem with overswinging in a misguided attempt to get extra distance. Yes, given a perfect swing, the faster the club head is moving, the further the ball will go, but no one has a perfect swing, and golf is often about finding the correct… Read more »