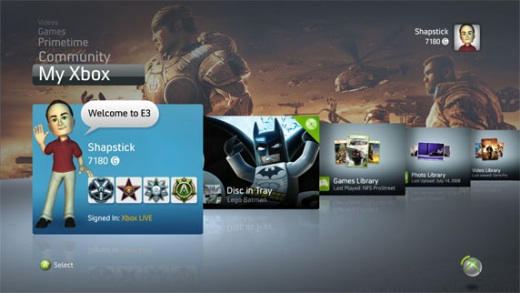 Now that I've had the chance to play around a bit with the New Xbox Experience (NXE) and Home, here are my impressions.

Overall, I think the New Xbox Experience is a big improvement and offers a lot of advantages to Xbox 360 owners, provided that they have: 1) a Gold membership; 2) a Netflix account; 3) a sufficiently fast broadband internet connection for streaming "HD" content; and 4) a 120gb hard drive. Unfortunately, I have none of these things.

I'm a Blockbuster Online guy, and although being able to stream movies to my TV would be cool, it's not enough to make me switch to Netflix. My current $20/month blockbuster subscription gets unlimited in-store exchanges, 3 mail-in movies at a time, and a free video game rental every month. Since only a subset of Netflix's library is available for streaming, I probably wouldn't be able to get the more obscure stuff that these services are good for anyway. On top of that, my "7mbps" Qwest DSL usually only runs at around 1mbps, so I wouldn't be able to stream in HD. Last but not least, I'm morally opposed to paying a subscription fee for Xbox Live Gold membership. I think Microsoft should make that service free, and I refuse to validate their strategy by paying for it.

One of my biggest Xbox 360 pet peeves is the ridiculously loud jet-engine-like fan. I feel like I have to turn up the volume just to drown it out. Allowing people to copy games to the hard drive is a great way around this. That being said, I'm stuck with a 20gb hard drive, so saving games to my drive isn't really that feasible. And since Microsoft insists on charging an insulting $150 for their 120gb hard drive, I'm not going to be getting that any time soon, helpful though the extra space would be.

Regarding the new Avatars, I thought it was kind of fun to spend a few minutes designing one, but I see little point to it. They don't seem to do anything that Miis don't do as well if not better. I don't really mind that they're a blatant rip off of Nintendo, even down to some of the sound effects in the creation screen, but their existence feels even less justified here than in the Wii's case. I'll have to wait and see if they come up with any interesting or meaningful ways to integrate Avatars into the overall gaming experience.

I fully recognize that for a certain subset of Xbox 360 gamers that have all of the things I mentioned above, the NXE offers a lot of added value and convenience. It just so happens that almost none of these benefits will come to me. Oh well.

Switching the subject to Home, there isn't much to say because there isn't much there. I agree with Brad's sentiments regarding the profound boringness of it all. There just doesn't seem to be much to do in Home, and I don't really feel any strong desire to be there. Half the time, I was watching a loading screen while going from my apartment to the plaza. The rest of the time, I was wandering around feeling part depressed, part bored, and part slightly creeped out. The latter stems from the fact that in Sony's effort to make their avatars more "mature" and realistic than Miis, they've fallen straight into the uncanny valley. Being in Home makes me feel like I'm in some vaguely dystopian future filled with vacant, plastic-looking faces, where everyone's thoughts are controlled by Sony and there's nothing to do other than absorb commercials and play stupid mini-games.

If Sony wants Home to be the amazing experience that they're claiming it will be, then they'd better find some new ways to make Home a place that players will actually want to be.