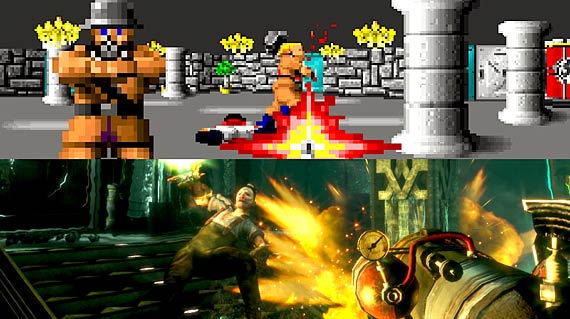 I was thinking recently about all the games I loved as a kid (Super Mario Bros., The Legend of Zelda, etc.), and about how there are very few that I can really get into anymore. Why is that? These games were thoroughly satisfying to me at the time. Maybe it’s because next to the more beautiful and elaborate next-generation experiences currently available, most of my old favorites seem like mere trifles by comparison. In absolute terms, BioShock is certainly a much better game than Wolfenstein 3D (one of the earliest first-person shooters). Does it follow then that modern gamers get more enjoyment from their videogames than gamers of previous generations did from theirs?

To answer this question, I tried to recall my early gaming experiences. I thought about that feeling of utter absorption and that initial sense of discovery. Super Mario Bros. and The Legend of Zelda were revolutionary when they first came out, and their novelty and originality generated great interest in and of itself. While their gameplay was certainly exceptional, they were also attractive simply by virtue of how well their graphics stacked up to other games. Given that, I posited that what makes a game fun is a combination of both intrinsic factors (e.g., gameplay, rules, etc.) and extrinsic factors (e.g., perceived quality relative to other games, uniqueness, etc.).

Having hypothesized that a game’s interestingness depends partly on the extrinsic factor of relative quality, I began to wonder about how this principle might extend beyond videogames. Back before videogames existed (as frightening as that sounds), kids had to resort to board games, sports, and other playground diversions. Were these kids any less intrinsically happy through engaging in these activities than the kids who play the latest videogames? I doubt it. Maybe they enjoyed themselves even more. In seeking answers to these questions, I stumbled upon some relevant research on happiness, a construct that is sometimes referred to as “life satisfaction” or “subjective well-being.”

According to prevailing theories of subjective well-being, humans have an innate set-point that governs their happiness across the lifespan. Individual successes and traumas can disturb the balance, but people usually return to a consistent set level of happiness. Research on the relationship between wealth and well-being has shown that it is not necessarily a person’s income that determines well-being (with the exception of being destitute); rather, it is a person’s income compared to others. So just as subjective enjoyment of a videogame depends partly on quality relative to other games, life satisfaction depends partly on how a person measures up to others.

It could be that the human experience of fun is mirrored in the bigger picture of life satisfaction. If true, this could help explain the relative nature of videogame enjoyment. Perhaps when players are engaged with a videogame that has sufficiently absorbing gameplay, the brain will gradually equilibrate to a set-point of fun. This set-point might be disturbed when a new and better game comes out, but eventually the novel aspects will wear off and the player will experience the same amount of fun that he or she had with previous games. When the standards of quality for the medium go up, the relative quality of older games goes down and they cease to be as interesting.

So why don’t I enjoy those old games as much as I used to? It would appear to be the result of gradual desensitization caused by the ever-increasing standards of the medium. It’s not that Zelda is any worse per se than it was when it first came out, it’s just that it’s worse compared to subsequent games. It all goes back to something most gamers know intuitively—namely, (with certain exceptions) older games aren’t as good because newer ones are better. The unspoken flipside of this, however, is that the best games at any given moment will elicit roughly the same intrinsic level of enjoyment. Games may improve, but we’ll never have any more fun playing them.

For now, let’s call it the theory of videogame relativity.

Quote: “It all goes back to something most gamers know intuitively—namely, (with certain exceptions) older games aren’t as good because newer ones are better.” I think it’s wrong to assume that new games are usually so much better than old games, and the reason is not that new games invariably suck while old games are brilliant (as the fanatical old school gamer would insist), but rather that fundamental changes in gameplay within many of the most well-established genres have been and continue to be comparatively rare, even over an extended period of time. The most striking difference between old and… Read more »

Your basic questions were: Why can’t I get into most games anymore and why could I get into those that I initially played? The first answer is simply experience. You have played many games by now and most follow similar formulas. When you played your first games, all formulas were new to you. The second answer is concept. A good and well executed concept will always draw a player in, but it gets harder the more experienced the player is. The third and probably most important answer is: Imagination. The very first games required a lot of imagination on part… Read more »