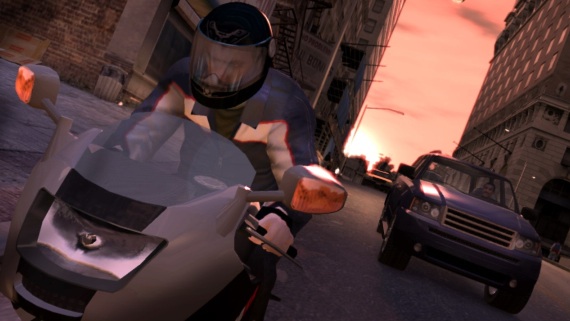 I haven't played Grand Theft Auto IV yet, and I probably won't play it for quite a while. But that doesn't mean it isn't exerting an influence on my life. Like many people, I've been keeping track of the game's astronomically high Metacritic ranking (99 with 31 reviews as of this writing), and it's safe to say that I'm pretty damn stoked about the possibility of playing it. The problem is that I'm currently in the midst of a competing set of interests and commitments, which for sake of brevity I'll simply refer to as "life."

In a few weeks I'll be finishing graduate school and receiving my master's degree, after which I'll be moving up to the Seattle area and (a few months later) getting married. What that means is that it's absolutely necessary that I find work within the next couple months. So where that leaves me right about now is in the throws of preparing applications, cover letters, resumes, CVs, and so forth. Not exactly the ideal set of circumstances for sinking one's teeth into a massive title like Grand Theft Auto IV. How do I deal with it?

Luckily, my fiancé came up with a rather clever idea. Since my top priority right now is on finding and securing gainful employment in my chosen field, she recommended that I hold off on playing GTA4, and instead reward myself with the game after I land my first post-graduation job. So far, this seems to be working very well. It's actually given me a lot of extra motivation to devote time to my job search (not to say that I wasn't devoting a lot of time to it already), and it gives me a nice treat to look forward to.

The idea is especially nice coming from my fiancé because ever since she learned second hand a couple years ago about the beating-up-prostitutes gameplay in Vice City, she's pretty much forever written off GTA as something she never wants anything to do with. At this point, even if the entire art world joined together and unanimously declared GTA4 the greatest artistic achievement the world has ever known, she still wouldn't give it the time of day. That being said, she has no problem with my playing it and fully supports my desire to do so.

I may not get the chance to play GTA4 for quite a while, but I can live with that. The game will still be there in a few months, but my dream job might not be. I think I'm making the right choice.

The most eagerly awaited game ever? Well it’s certainly up there in the top five, rubbing shoulders with the Master Chief which ever way you cut it. Does it look amazing? Yes of course it does. More gritty and less cartoonish than it’s predecessors, detail aplenty, pop-up and draw-distance problems controlled if not entirely removed, cars that look as good as a racing game, characters that look as good as a third person action game. It’s all here. It looks and feels fantastic, but… If you’ve been there since the beginning there is just a tiny nagging feeling that past… Read more »

Since it would appear you’re not gay, you probably mean “fiancée” and not “fiancé.” Not that there’s anything wrong with either one….

Good luck with the job hunt!

Whoops. You got me. I didn’t slap that extra “e” on there. I feel pretty damn foolish now. Thanks for pointing out my error. Won’t happen again.