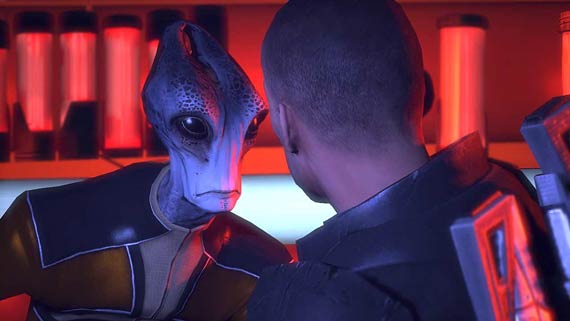 I’ve been thinking recently about how conversations occur within videogames. In many role-playing games (RPGs), players can talk to various non-player characters (NPCs) by walking up to them and clicking on a button to hear what they have to say. In many cases, NPCs will repeat the same thing over and over again no matter how many times the player talks to them. To be honest, it isn’t really a conversation at all. It’s more like information gathering. The player’s onscreen avatar usually doesn’t say anything in most RPGs. Just walk up to an NPC, hit the talk button, and he or she spits out some preprogrammed dialogue.

More recently, games have increased the complexity of these “conversations” by including points where the player can choose between a set of responses, which in turn affects the next thing the NPC will say. For the most part, however, these choices are of little consequence beyond providing a touch of variety to the standard grind of gathering information and exploring. Elder Scrolls IV: Oblivion does a good job of extending the basic formula by giving the player a menu of topics to choose from when conversing, but it’s really not fundamentally different from what’s come before.

That’s why the forthcoming Mass Effect has me so intrigued. The game’s conversation system allows players to choose from multiple responses, with the added option of interrupting an NPC with the chosen response or waiting until they are done speaking. This is meant to lend a more dynamic quality to conversations, and judging by the recently published review for Mass Effect in Game Informer, the system works very well in practice. I hope this will pave the way for further innovations in conversation and storytelling. At the very least, this has already got me thinking about what the next wave of advances will look like.

One possibility may be the use of conversational programs. A recent article in the journal Computers in Human Behavior describes a study in which a group of college students chatted with a conversation bot (i.e., a computer program capable of engaging in a conversation). What fascinated me about the study was that the students clearly perceived the program as having human-like qualities. Even though the students knew they were talking to a computer, they actually showed general agreement in their perception of the bots personality traits (e.g., friendliness, thoughtfulness, neuroticism, etc.).

In addition, the researchers were able to manipulate the students’ feelings about the bot by changing whether or not it used the students’ first names and how long it took to respond. On top of that, the researchers found that the length of time that the students spent talking to the bot was inversely correlated to how neurotic they though it was. So it seems that not only do people dislike talking to neurotic humans, but they also dislike talking to neurotic computers. In a sense, this isn’t surprising. But it is surprising to me that a computer program could actually come across as possessing a recognizable personality.

So what does this have to do with videogames? For one thing, it suggests interesting possibilities for how players could interact with NPCs. Most RPGs are filled with random incidental characters, many of whom have no connection to the main plot. I think it would be fascinating if certain secondary characters in a videogame actually behaved like conversation bots. (For this to work, it would obviously be necessary for the player to use a keyboard.) Of course, there are all sorts of problems this would present from a design perspective. I’m not sure how it would be possible to have well written dialogue in a game if the player is partially responsible for creating it.

The real issue, as I see it, is figuring out how a conversational program could be meaningfully incorporated into a game, rather than just being used in some throwaway manner. If players can say or ask anything they want, then how could the conversation program react in a way that is meaningful and consistent with the game world? It’s an unrealistic expectation to hope that the player would only say or ask things that make sense given the context. Players would inevitably say things to the computer that are anachronistic, nonsensical, or just plain silly. This is not to say it could never work, but the issue of player unpredictability would have to be dealt with.

The notion of having a conversational program in a videogame may be a little far-fetched, but then again a game like Grand Theft Auto would have seemed pretty far-fetched 20 years ago. There's ultimately no way of knowing for sure what kinds of technologies will find their way into the future of interactive entertainment. For now, I am very much looking forward to checking out Mass Effect for myself and experiencing its unique conversation system firsthand.

You might want to try out Douglas Adams’ adventure game Starship Titanic, which uses chatbots for its NPCs. Or for something more sophisticated (and free), try the short experiment Façade. At least, I’ve heard it’s sophisticated- my computer can’t run it. Anyway, the trouble with chatbots is they’re not practical. You can program one to recognize, based on sentence structure and key words, what sort of response is appropriate. But then you still need to manually write in that response, every single time. What people tend to not understand about chatbots is that everything they say is prerecorded. So they’re… Read more »