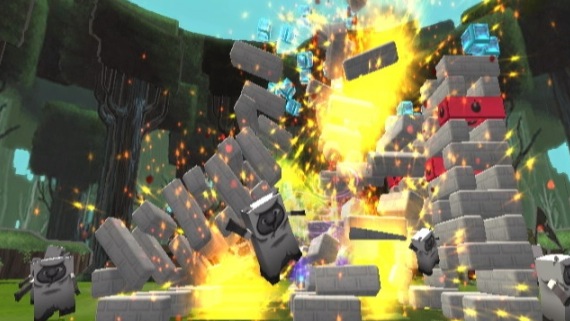 Boom Blox is certainly one of the more interesting Wii titles that I've come across recently, and it offers a fine example of how the Wii remote can be used in unique and non-gimmicky ways. While my initial impressions of the game were extremely positive, the experience was almost completely derailed by a near-crippling soreness that developed in my right arm after several multi-hour game sessions.

The problem basically stems from the ball-throwing gameplay. There are many different types of games in Boom Blox. Some require grabbing and pulling on blocks. Some require pointing and shooting at things on the screen. And others–namely, the ball-throwing games–require flicking the Wii remote forward with as much acceleration as possible. The movement essentially involves swinging the Wii remote in a sort of whip-cracking motion with the arm being only partially extended for each swing. Engaging for several hours in this kind of rapid partial extension of the arm should probably be avoided, as I learned through hard experience. Although the soreness thankfully subsided after about five days, my feelings around Boom Blox may have been irrevocably harmed.

For years to come, the words Boom Blox will probably evoke in me vaguely disturbing thoughts of that weird Steven Spielberg game that was really fun for a while but that almost caused permanent muscle damage in my arm. I think my feelings about it could probably be repaired if I went back and spent some more time with the less injurious game modes, or at least if I could learn to play the ball-throwing modes in a safer way. Since I only rented it, however, I won't be able to play it long enough to bring about such a corrective emotional experience.

Thinking about the game, and what it is, and what it contains and then pausing and thinking about the Spielberg connection just leaves me feeling utterly baffled. I mean it's just so random. Jaws, Indiana Jones, Schindler's List, Jurassic Park, Minority Report, and now…Boom Blox. What? Huh? Come again? Spielberg is practically synonymous with movies, and now he helps make a game whose essential qualities are completely those of a game and not those of film or cinema.

I guess there's no rule that says Spielberg shouldn't be allowed to make a Jenga-like videogame. It just feels so completely out of left field and so totally unrelated and uninformed by all of the things that make Spielberg who he is. It'd be like if Spielberg suddenly decided to team up with Nike and create a new running shoe and that after the shoe finally came out it just turned out to be, well, a pretty good running shoe. That's it. No obvious features to indicate that it had been made in collaboration with a famous film director. Just a pretty solid and well-made running shoe that makes your feet sore if you run on them too much without proper training. That's what Boom Blox feels like.

You really don’t have to put that much effort into hurling things, and tugging and teasing blocks out of the stack you always feel in control. If it goes wrong you know it’s your fault.

Let’s begin by stating the obvious: Were it not for “Cooking Mama,” we wouldn’t be talking about “Order Up!” today. “Mama” made the cooking video game the unlikely phenomenon it somehow became, and “Up’s” core gameplay bears more than a passing resemblance. But rather than merely hijack a ride on the money train, “Up” does what knockoffs should but rarely do: It contributes to the genre in ways that make sense, and it vastly outclasses the game that inspired its creation in the first place. As with “Mama,” the core gameplay in “Up” centers around preparing food — flipping this,… Read more »

Has this guy ever had a job ? Come with me for a week and you can feel that feeling all over your entire body….then you know what….do it for another couple weeks and you’ll be….strong WOW !

First off, I love this game. In a world of cheesy, overly Japanized, child friendly Wii-ness it is quite a relief to find such and amazing game among the gimmicks. The author of this review doesnt seem to have done his homework. Spielberg backed this game because he wanted a fun but challenging game to play with his family. Mission accomplished. Its not like a class A director often puts his name on a video game, especially one that is in no way related to any movie he has ever been involoved with. The game is easy enough for little… Read more »

First off, I love this game. In a world of cheesy, overly Japanized, child friendly Wii-ness it is quite a relief to find such and amazing game among the gimmicks. The author of this review doesnt seem to have done his homework. Spielberg backed this game because he wanted a fun but challenging game to play with his family. Mission accomplished. Its not like a class A director often puts his name on a video game, especially one that is in no way related to any movie he has ever been involoved with. The game is easy enough for little… Read more »

Just bought Boom Blox yesterday with the intent of getting something fun for the whole family, and it was a good purchase. Fun enough for the son (age 6) though it’s actually too difficult in a lot of places, the wife (serious gamer) digs it a lot, and i think it’s a lot more fun than i expected. totally hear you on the arm soreness, though… my son hasn’t complained of pain, but both the wife and I have sore arms, forearms and wrists from the throwing motion. i know i’m already prone to this sort of thing, but i… Read more »

I just noticed; it’s a blog post and not a review.
Apologies.

Yes, the Spielberg connection is weird, but so what? You spend so long blathering about Spielberg and whining about how you hurt your arm (you don’t actually have to throw it *that* hard) that you don’t even mention what this game is like to play. I don’t have time to write a full review (and – hey, it’s not *my* job), but the skinny is this: Physics is spot-on. People have criticised the game for it’s low gravity, but this is intentional and not a physics problem. Everything is consistent and predictable and the slight slow-motion effect is important for… Read more »