Brimming with verbal wit, self-parody, and visual paradoxes, Super Paper Mario is the best example yet of what may justifiably be dubbed a postmodern videogame. Though entertaining enough in its own right, and still enjoyable even without catching all the references and inside jokes, what really elevates the game is the ingenious way that it calls attention to the absurdity of traditional videogame conventions. While admittedly the novelty of the dimension-shifting gameplay starts to wear off during the second half, the smart and clever dialogue keeps things entertaining throughout.

As Dan points out, the most interesting feature of the game is the ability to switch from 2D to 3D, a simple concept that leads to some fascinating and complex visual contradictions. A bridge that is fully functional in 2D, for instance, is merely made up of two paper-thin railings and no bottom when seen in 3D, and what seems like some non-interactive mountain scenery in 2D is actually a traversable surface in 3D. Having grown up with the old Super Mario Bros. paradigm, this gameplay shift practically felt like a shining revelation. Younger players may disagree, but I found it brilliant. 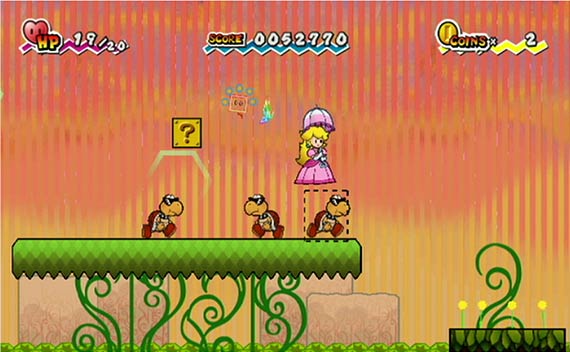 The visual playfulness is reinforced by the dialogue, which is filled with self-aware humor and repeated breaking of the fourth wall. The opening, for example, starts with Mario and Luigi reflecting on how it’s so peaceful that it “makes you just want…some kind of shocking event.” When Toad tells of Princess Peach's kidnapping, Luigi exclaims, “That’s ridiculous! Who in the world would do such a thing?!” Later, when Mario expresses bewilderment after being told to use the “A button”, a character confidently reassures him that some being watching over them will know what it means.

As fun as all this facetiousness is, Super Paper Mario does have a few flaws that become more evident as the novelty of the gameplay wears off. The necessity of opening a special menu to switch between different characters and abilities grows increasingly tedious over time. Although the dialogue is generally entertaining, it occasionally felt excessive. Like Dan, I think the game is too easy. Upping the difficulty would have helped sustain my interest more during the second half. These are only minor quibbles, but they do take a toll over the course of the 20-hour adventure.

In the end, what I’ll remember most about Super Paper Mario is the delightful way that its 2D/3D visuals and smart dialogue serve to underline not only how ingrained certain videogame conventions have become but also how far videogames have advanced. I think it really says something about the maturity and freestanding quality of the medium that there can be a game that derives so much entertainment purely from self-reflexivity. That videogames provide such fertile ground for multi-dimensional satire (no pun intended) is as sure a sign as any of the creative health of the art form. Rating: 8 out of 10