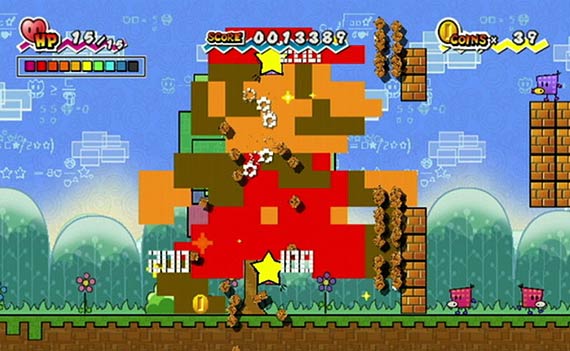 I’ve been thinking recently about the notion of postmodernism in videogames (i.e., self-awareness, self-reflexivity, irony, paradox, and breaking of the fourth wall) and what the existence of postmodern games says about the medium. I wrote in my Super Paper Mario review that:

“I think it really says something about the maturity and freestanding quality of the medium that there can be a game that derives so much entertainment purely from self-reflexivity."

Let me expand on this a bit. For me, the amazing thing about Super Paper Mario is that its self-reflexive qualities reinforce each other on both the verbal and visual levels. While the 2D/3D-switching mechanic literally mirrors the game's deconstruction of standard design paradigms on two separate dimensions (dialogue and level design), the mirroring-structure itself is literally reflected in the design of Flipside and Flopside. I could go on, but suffice it to say that Super Paper Mario is a wonderfully deep subject for analysis.

Some might counter that these postmodern qualities are nothing special. Metal Gear Solid brilliantly broke the fourth wall during the fight with Psycho Mantis, and Eternal Darkness: Sanity's Requiem similarly addressed the player directly with its "sanity meter." Yet what makes Super Paper Mario so significant is the way that it embodies this kind of wall-breaking self-critique in its very structure—it doesn't merely contain elements of critique, it is a critique. So what, if anything, does this mean for videogames?

There has been a lot of debate about the way videogames should be analyzed. Some people find that film offers a convenient analogue, while others prefer to take a narrative perspective. An increasingly common view, however, is that videogames are a unique and freestanding art form—a mix of narrative and ludic elements—that ought be studied on its own merits and without reliance on other mediums as a lens for analysis. The difficulty is in forming the vocabulary to properly articulate what makes games special.

I think that as videogames evolve, a new critical vocabulary will naturally develop. Indeed, this is already happening. While I don't know what shape it will ultimately take, I feel more certain than ever that videogames will grow into as rich an art form as any other. Why? The proof is in the capacity for games (like Super Paper Mario) to serve both as viable entertainment and as a source of meaningful self-critique. Who knows, maybe the postmodern videogame itself will be an aspect of some new critical language. Only time will tell.

Derek, You raise an interesting point. I don’t necessarily think that the game should get a free pass just for poking fun at itself. But I also happen to think it is intrinsically entertaining in its own right. That’s a matter of opinion, and what’s fun for me might not be fun for everyone. As far as the critique being “meaningful”, I would say that it stems partly from what the self-critique says about how far videogames have come as a medium. For me, the fact that there can be such critique at all is a meaningful development. But again,… Read more »

My experience with the game seems that it is selective in what elements it wants to critique. Certainly it’s self-reflexive, but it is almost hell bent on having other conventions(arbitrary bosses, collecting, lazy area design, etc) that are tired. Why have them at all? Unless, of course, them being there is criticism of their own existence. That seems odd considering the history of the Mario RPG series.

I’m not sure if, as I see it, the pot calling the kettle black is “meaningful self-critique”.