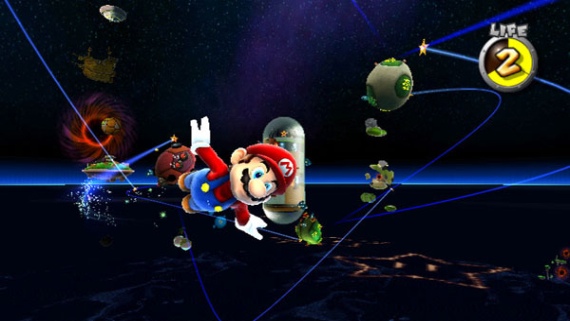 The arrival of Super Mario Galaxy marks the continuation of one of gaming's most beloved franchises. It also happens to mark the extension of Nintendo's remarkable streak of critical supremacy. According to the review aggregator site Game Rankings, the top-rated game for each of the last three console generations appeared exclusively on a Nintendo machine.

From newest to oldest, these are: Super Mario Galaxy on the Wii, Metroid Prime on the GameCube, and The Legend of Zelda: Ocarina of Time on the Nintendo 64. Were such data available for the 16-bit and 8-bit eras, that record would probably stretch back even further, with Super Metroid or The Legend of Zelda: A Link to the Past likely being tops on the Super Nintendo, and Super Mario Bros. 3 or the original Super Mario Bros. taking the crown on the old-school Nintendo.

Based on this mixture of hard data and (in the case of the 8-bit and 16-bit eras) informed speculation, I've compiled this list of factoids. (Note: Although my choices for the top-rated 8-bit and 16-bit games will be criticized, I tried to hedge my bets a little by picking what are widely considered the top two games from both eras. This is reflected in the following percentages.)

Of the top-rated videogames from each of the last five console generations:

4) 90% were directed, produced, or designed by Shigeru Miyamoto

So what does this all mean? For one thing, it would seem to suggest that the surest path to critical success is to have Shigeru Miyamoto make a platforming game sequel for Nintendo starring Mario, Link, or Samus that has the word “Super” in the title. Maybe we’ll see a Super Zelda Bros. Prime on Nintendo’s next console, perhaps involving Samus running through Hyrule stomping on Goombas.

On a more serious note, I think this just goes to show that the minds at Nintendo can—when they pool their collective intellectual assets—create absolutely amazing games. Despite all the criticism it has received over the past decade for alienating third-party developers and failing to provide a sufficient quantity of high quality titles, Nintendo can still be counted on to produce at least one shining star of a game each console generation.

I'm no Nintendo fanboy. In fact, most of my favorite games fall completely outside this list. Nevertheless, I can't deny being impressed with what Nintendo has managed to accomplish with its three biggest franchises. Can this streak possibly continue? We'll have to wait and see. The current cycle isn't over, and it's always possible that a new non-Nintendo game will shoot to the top of the rankings. This medium is filled with such a rich variety of styles and genres, however, that I'd be incredibly surprised if the highest-ranked game of the next console generation still stars Mario, Link, or Samus. But if anyone can pull it off, it's Nintendo.