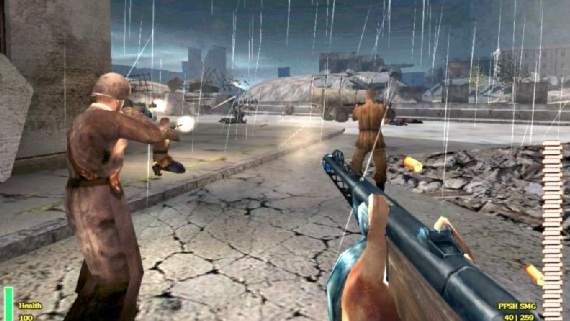 The debate over videogames and violence shows no signs of abating, and despite having grown a little weary of the topic, I'll admit that there's a part of me that remains ever intrigued by the latest research in this area. So in that spirit, here's another scientific article to further fuel the discussion. This one comes from the March issue of Criminal Justice and Behavior and presents the results of two studies examining the relationship between videogames and real life violence.

In the first study, a group of students were randomly assigned to play either Medal of Honor: Allied Assault or Myst III: Exile. (Why these researchers can't find better and more recent games for these studies is beyond me.) A comparison group was allowed to choose which of these games to play based on a written description. After playing, the subjects participated in a laboratory task (description here) designed to measure aggression. From the article:

"Individuals who played Medal of Honor were no more aggressive after playing than were individuals who played Myst III….[A]lthough males appeared to prefer to play violent video games relative to females, there was no evidence from this study to suggest that people who prefer violent video games are more innately aggressive than those who do not…"

In the second study, several hundred students filled out questionnaires concerning their levels of exposure to family violence, past criminal behavior, aggression, and videogame playing habits. The results were then analyzed using statistics to see if any connections or patterns could be found. From the article:

What this means is that even though playing violent videogames does not appear to predict violent crime, there is evidence that a certain percentage of highly aggressive people are drawn to violent videogames. This isn't very surprising. It makes a lot of sense that people who are already aggressive, perhaps because of a violent family environment, would be more likely to seek out violent media, whether that be movies, music, or videogames.

Of course, this article won't end the videogame violence debate, but it still makes for an interesting read and a welcome addition to the scientific literature on the topic.

You know I see these people who have PHDs and have been researching this for like 20 years or something, and I think to myself, if there is a kid who kills someone because he plays violent video games, it’s his own mental problem. I play these games and I love people, I treat it like a sport not like it’s real life! The people who claim that these games are evil have oviously never played them.

To all teen males who play this game three to four hours a day and say it’s harmless……who are you kidding? Seriously, I have a 16 year old and I have watched, heard and felt the change in behavior and response to me as a female and mother once the game time increased and the opportunity to talk to a wider group of people playing opened up. What do you call women soldiers on these games? How do you talk to each other? The language is vulgar and the mentality is totally murderous to anyone who gets in the way.… Read more »

The study doesn’t say that video games cause violence. What it means by a “predictor” is that you could collect data on people’s family violence history and video game habits and have a good chance of predicting whether or not they’ll have a criminal history of not. Psychologists don’t claim to determine cause and effect, just the strength of relationships between variables.

Yes, quite so. And not so surprising really. But I don’t think videogames should be singled out in that area, as violent impulses in general tend to trigger violence more easily in violent people, be it movies, music or harsh words, than in less violent people.

> > The results did suggest, however, that the interaction
> > between aggressive personality and violent-video-game
> > exposure is predictive of violent crime.

> What this means is that even though playing violent
> videogames does not appear to predict violent crime, there
> is evidence that a certain percentage of highly aggressive
> people are drawn to violent videogames.

Hm. It seemed to say something else from what I could tell.

It seemed to say that an aggressive personality, when exposed to a violent video game, increases risk of violent crime.

They use old(er) games in studies because it usually takes a year or so to write up and get funding for a study like this (a year, even, would be exceedingly quick). And they have to include the names of the games they are using AND the games they pick have to have some sort of demonstrable value for the study (i.e. they’re not likely to be new, anyway) — so even for a very rapidly put together story you wouldn’t expect the games to be newer than two years old.