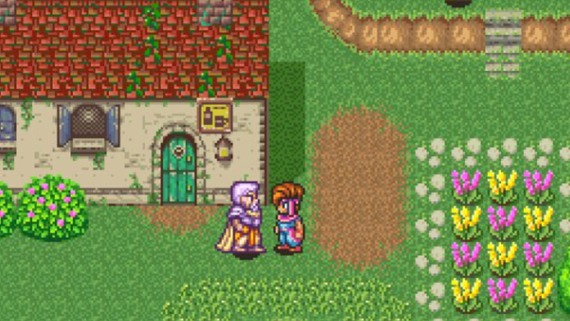 As I write this, I'm in a tiny little town in middle-of-nowhere Oklahoma visiting my dear mother and half siblings. My cell phone barely holds a signal. The sole television in the house is a 12-inch that only shows programs of a religious nature. All the food is vegan. Alcohol is prohibited. The lone internet connection is a dial-up through a computer that takes several seconds to display a word after it has been typed. Oh yeah, and videogame playing is expressly forbidden.

In case my mother ever reads this, let me make it clear that I love my mother, I greatly value visiting her at Christmas, and I will continue to do whatever I can to visit her every year. That being said, I do feel rather limited here. I find it tough being in a foreign environment, unable to access any of my usual comforts and self-care activities. My only videogaming outlet comes from my furtive and infrequent sessions with emulated Super Nintendo and Genesis games on my laptop.

As an aside, I listened to Jonathan Blow's "Design Reboot" talk en route to Oklahoma. I don't have time to say much about it, but I think he makes an excellent point about the lack of meaning in most videogames and their over-reliance on scheduled rewards. I certainly wouldn't have played Call of Duty 4 multiplayer so obsessively were it not for its ranking system. I intend to start thinking more about the intrinsic quality of the games I play, outside of their various reward schedules.

But I digress. Before my trip, I had decided that I would try to take advantage of my relative technological isolation by revisiting some of my old favorites—like Super Metroid and Landstalker—and maybe even trying out some old classics for the first time. In that spirit, I have spent all of about 30 minutes playing Secret of Mana, a role-playing game that I've often seen mentioned on internet forums with topics like "List your top 10 favorite Super Nintendo games of all time."

So far, I'm not particularly impressed with Secret of Mana. I'm finding it extremely difficult to enjoy, which I'm sure is due in no small part to its primitive gameplay and graphics. The same barrier generally holds true for most games from that era that I try to play. I find myself making great mental exertions to appreciate these games in their proper context, in the same way that I would with an old black-and-white film. Secret of Mana may be worthwhile, but I'm not seeing it yet.

There are some exceptions of course. Super Mario Bros. 3 still holds up well, as does Super Metroid. Final Fantasy III also remains quite enjoyable. I can't think of a satisfying explanation for why certain old games still (kind of) work for me while others don't. Since I played and enjoyed many of these games when they first came out, those positive memories probably contribute. I never played Secret of Mana as a kid, however, and so it can't benefit from positive associations.

I haven't given up on Secret of Mana. I've heard enough good things about it that I'm willing to make the effort to experience some of what it has to offer. I'd like to think that I'm the type of gamer who can appreciate the good in a wide variety of old and new games. Will I keep playing any of these 16-bit titles once I return to my Xbox 360 and Wii? Probably not. I have no illusions about that. But in the meantime, I might as well try to fill in some of the gaps in my gaming education.

Hear hear KWarp! Although it’s over 13 years old and I’ve played the largely similar GBA games, Super Metroid was still able to eat up my Christmas playtime more than Mario Galaxy (which is fantastic). The comparison between the two was slightly depressing actually. For all it’s spot-on presentation and barrage of well-executed ideas, Galaxy still lacked the immediacy and structural flow of Metroid. Quite apart from Brandon’s slightly sour nostalgia trip, this made me wonder if platformer adventures really did peak in 2 dimensions. But that made me feel like a right old fogy, so I stopped wondering that… Read more »

I got a small taste of Secret of Mana when it first came out, and tried to appreciate it fully via emulation around 2003. It didn’t charm me when I first played it, and when emulating it years later I quit halfway through. On the other hand, my best friend emulated Secret of Mana around the same time and became completely addicted to the game, later playing the Japan-only sequel. Mana has a strange appeal factor certainly. I never played Super Metroid until its Virtual Console release in August. Compared to my previous experience with Metroid Prime, Super Metroid initially… Read more »

I’m heading to my Mother-in-law’s house on Saturday, in Florida. I’ll have to leave my PS3 and 360 behind and my only gaming outlets will be the laptop, GBA and a PSOne/LCD combo.

I’m hoping to catch up, or finish, a few games on the GBA. The laptop will have older games like Jedi Knight II, Starcraft and Railroad Tycoon 3, because of the limited power of the system. I’ll finally dust off Final Fantasy Tactics, for the PSOne, and just maybe I’ll take notice to all the hype the game received.