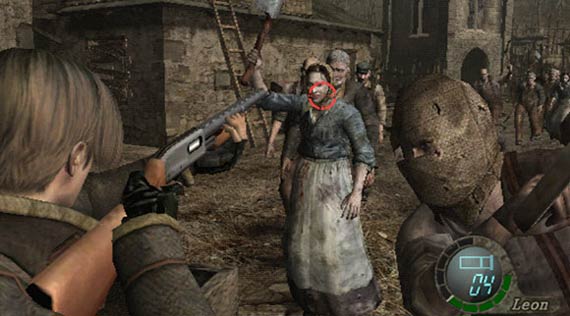 With Halloween here, I've been thinking a lot about scariness in videogames. Can videogames produce scares as effectively as movies? If so, when did scariness become a viable element of game design? Is scariness in videogames relative? How is scariness defined? What are the scariest videogames I've played? What made them scary? How does scariness interact with gameplay, if at all? It's a complicated subject, and there are certainly many ways to look at it, but I'll do my best in offering some thoughts on these questions.

I have to admit that, up until now, I have still never played a videogame that scared me as much as some of the movies that I have seen. It just hasn't happened. The gap has definitely closed over the years, but the fact still remains that, so far as scariness is concerned, movies have the upper hand. Is this due to some intrinsic limitation of the medium? Not necessarily, as evidenced by the fact that videogames have been getting creepier over the years. As realism continues to improve, so too will the medium's potential for delivering frightening experiences.

To the extent that scariness in games is tied to realism, it is abundantly clear that scariness has not always been a viable aspect of game design. It's hard to imagine an NES-era game producing anything approximating genuine fright. The games back then just didn’t look real enough. So when did that start to change? CD-based games were a big step in that they enabled designers to include digital audio for a much more realistic sound environment. Realistic sound makes a big difference in creating a convincing atmosphere. But that was only part of it.

The shift to 3D started closing the visual gap between games and reality. As the technology improved, so too did the demand for more mature content. Resident Evil marks a significant turning point. While I don't think that Resident Evil is particularly scary (in the interest of full disclosure, I didn’t play it when it came out and so I don’t know how it might have seemed at the time), it was still a big step in the direction of scariness. Looking back, I think it really marks the beginning of when scariness became a viable goal for videogame design.

Even as I write this, it occurs to me that this whole notion of scariness might be somewhat relative. Most people don't find older movies particularly scary, or at least not as scary as they used to be. I know that's been the case for me. As with videogames, the reason for this seems to be mainly technological. The special effects used in older movies generally aren’t as realistic, which makes the whole suspension of disbelief thing much more difficult. Indeed, moviemaking technology has advanced so much that old horror flicks often seem funny today.

I wonder if this relativity of scariness also applies to videogames. It’s a tough issue to examine because there weren’t a lot of horror-themed games being made 20 years ago, and things that I found scary as a kid wouldn’t seem as scary today anyway. I suspect, however, that videogame scariness is not entirely relative. I doubt that a Resident Evil made for the NES would be as intrinsically scary as Resident Evil 4 is now. In a previous post, I argued that videogame enjoyment is largely relative. I don’t believe that the same holds true for scariness.

While I’ve never played a game that scared me as much as any movie, there are some that have come pretty damn close—in particular, Resident Evil 4 and BioShock. I think the key word here is atmosphere. Indeed, one of the biggest improvements afforded by new technology is the quality of a game’s atmosphere. It was Resident Evil 4 that really brought home for me how much atmosphere can influence the gaming experience. That I could feel creeped out simply by walking through a dilapidated virtual village struck me as a big leap forward for the medium.

The atmospheric factors in Resident Evil 4 and BioShock have little to do with gameplay, however. The creepiness that pervades these games resides primarily in the visuals and sound, design aspects that could apply just as well to a horror movie. So what can games uniquely offer to the cause of scariness? I think the fight with Verdugo in Resident Evil 4 offers a good example. Dodging and fleeing from this Alien-inspired monster adds loads of tension to a game that already drips with atmospheric freakiness. I get a bit tense just thinking about it.

It would seem then that the interactive nature of games can introduce a distinct element of frantic tension, above and beyond what would result from merely watching a scene unfold. Eternal Darkness: Sanity's Requiem goes about it a different way. The game ingeniously messes with the player’s head by subverting certain gameplay conventions—even breaking the fourth wall—in order to make the player feel more creeped out and uneasy. So it would also seem that messing with the player’s mind is another path to scariness in videogames.

These examples really only scratch the surface. My videogame knowledge is far from comprehensive, so I'd be curious to know what others think about this. Advances in videogame technology have greatly expanded the creative possibilities of the medium, and not the least of which its capacity to scare the crap out of players. This is a significant development, not just because of what is says about the technology of games, but also because of its connection to the larger task of creating games that can evoke a broader range of emotions.

Another title that you missed is your article, Penumbra: Overture. This is a 1st person adventure game, not a shooter and possibly one of my favourite titles this year. I don’t wish to go into depth about the story for risk of spoiling it, but the game mechanics hinge mostly round “point’n’click” and real world physics problems, combat takes the back seat. Incredible atmosphere, well written and extremely creepy. Total immersion is required so don’t mess it up by increasing the gamma or leaving the lights on. The relentless darkness threatens to envelop you, being both your best friend and… Read more »

I recommend you play Silent Hill 1 and 2 and Fatal Frame 2: Crimson Butterfly.

If you are interested in truly frightening levels that rival the Fort scares in Bioshock, I recommend playing Thief: Deadly Shadows for the “Robbing the Cradle” level, which takes place in an abandoned orphanage housing a mythical hag and barely any enemies. Also play the penultimate level of Condemned: Criminal Origins, a level that has only one enemy.

Scary games are a mixture of atmosphere and timing. It’s this impeccable timing that sets current videogames apart from current filmic drivel like Saw IV.

It sounds like I’m hearing some agreement on the importance of atmosphere and its relationship to creating tension. More than one person has mentioned Silent Hill. I think I’ll have to check that out sometime. And thanks everyone for all the other game recommendations. That’s exactly the kind of feedback I was hoping for. As I’ve thought more about this whole scariness thing, it seems to me that I may have been wrong in the way that I framed the discussion. I’m not even quite sure that “scariness” is the right word here, whether we’re talking about movies or games.… Read more »

Yes, play the Silent Hill games. At the very least, pick up Silent Hill 2. Although playing part 1 will give you better backstory as to what exactly is going on in the place, Silent Hill 2 is good enough to be its own contained story, with plenty of unique things to pick apart in its plot and imagery.

Silent Hill 2 also has, hands down, one of the top five stories that have been told in the medium, at least in my opinion. I think you would be hardpressed to find someone in extreme disagreement with that assessment.

i’ll agree with most that SH2’s story is good, but the actual gameplay and level design left me cold… it was so bad, in fact, that it soured me on the game overall. personally, i stil rank the original SH as the best in terms of having both strong story and relatively strong gameplay. i have a hard time overlooking some of the drudgery the SH series lapsed into for the sake of the story. some may disagree with me, but that’s my take, anyway.

I think games can be more effective at producing scares than movies because of the interaction involved. The most recent scary game that sticks out in my mind is F.E.A.R. Yeah, the Ring-like girl with the red dress and black hair was very cliche, yet whenever she appeared, although she was a ghost-like apparition, I always ended up firing off half a clip of rounds at her like crazy whenever she creeped up on me (especially this one time in an empty office cubicle at night–or so I thought until she crawled out from nowhere). But there were other times… Read more »

I found the Alien Vs. Predator PC games (I & II) to be pretty scary to play the human mission. I can remember nearly jumping out of my seat a couple of times. At one point in AVPII in the human marine mission, you start off and nothing is happening, its just dark and creepy, then all of a sudden a pipe falls from the ceiling in front of you shaped a little like an alien head… made me jumpy! I think the key to it is good tension, hordes of endless monsters are not scary (Serious Sam) but good… Read more »

Please, don’t look at the commercial games alone. If you want to be scared, play some of Ben Croshaw’s games. Start with 1213. Then 5 Days a Stranger, 7 Days a Skeptic, Trilby’s Notes and 6 Days a Sacrifice (though the last one is a lot less scary, it concludes the series in a nice way).

Brandon,
Have you played Silent Hill 1 and(or) Silent Hill 2? If pressed, tI’d say these are probably the scariest things I have ever seen in an text. I’d like to see a followup to this blog post after you’ve played them; it should be interesting.

I find videogames (at their best) significantly more frightening than movies. I can rarely make much progress on the games that trip my fear switch as I simply get too tense to keep playing. A movie might (I can only think of two or three that have) give me trouble sleeping for a day or two, but I’ve never been compelled to shut one off midway through due to sheer nerves. I think a large part of it is the interactivity. A movie, well…if I like the characters I’ll be scared on their behalf. If I don’t like them or… Read more »

I think the question of how the unique element of electronic games, namely the gameplay, can contribute, or create the impact of fright is a good one. It’s important, for the sake of the development of the electronic game art form, to ponder the essential element of the art form, gameplay. Graphics, sound, and all of that is important, but properly they are not essential to the artform. Anyway, I think the example of battling Verdugo in RE4 is very good. I haven’t played that game, but I’ve seen the sequence played, and it made me tense. Now why is… Read more »