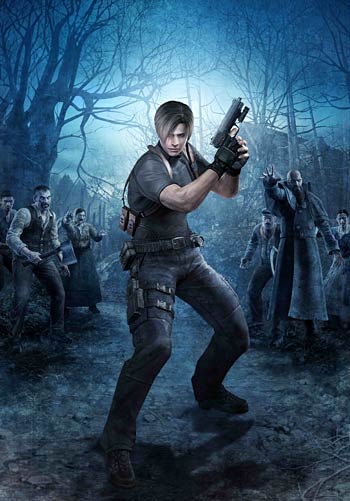 With its excellent pacing, gripping gameplay, tense and creepy atmosphere, and compelling over-the-shoulder camera, 2005's Resident Evil 4 has gained widespread recognition as one of the best videogames ever made. Resident Evil 4: Wii Edition features all the same content from the GameCube and Playstation 2 versions along with a specially redesigned control scheme that takes advantage of the Wii's unique motion-sensing controller. While this new iteration has nothing new in the way of added content or graphical upgrades, the Wii-enabled improvements to the aiming and knifing controls add freshness to the experience as well as a more streamlined and intuitive way to play.

The most salient change has been to the aiming system. Now, players can target deranged villagers and cultists by simply pointing the Wii remote at the screen. Holding the B-trigger draws the weapon, pressing A with the thumb fires it, and flicking the remote reloads. While the firing might seem counterintuitive on paper (why not use the B-trigger to fire?), the setup actually works very well in practice. Unfortunately, players can no longer move the camera by dragging the pointer to the edge of the screen, a function that is now relegated to the analog stick. Despite this flaw, once I had mastered the new system, I still found it to be much faster and more precise than the old one. 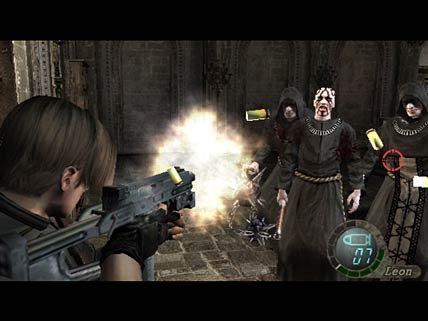 The biggest control improvement is in how the knife is used. In previous versions, players had to hold one button down to wield the knife, aim it with the analog stick, and press another button to slash it. Now, players just swing the remote and the knife automatically swipes at the nearest target. It’s a simple change, and a perfect example of how to properly capitalize on the strengths of the Wii remote, taking an action that once required two buttons and an analog stick, and reducing it to a completely natural and intuitive physical motion. Not only does it make it easier to break open crates, but it also adds an extra level of intensity and immediacy to using the knife in battle.

Visually, Resident Evil 4 has suffered a bit since it first came out. After two years of high-definition videogames from both the Xbox 360 and the Playstation 3, its once-cutting-edge graphics look noticeably dated. Since it is visually identical to the GameCube version—save for the addition of “true” widescreen support—this is no big surprise. That the visuals hold up so well on the Wii is a testament not only to how great Resident Evil 4’s graphics were to begin with, but also to how dated the graphics look on most Wii games in general. Nevertheless, given that the Wii is purportedly twice as powerful as the GameCube, a small bump in the visuals would have been a welcome bonus. 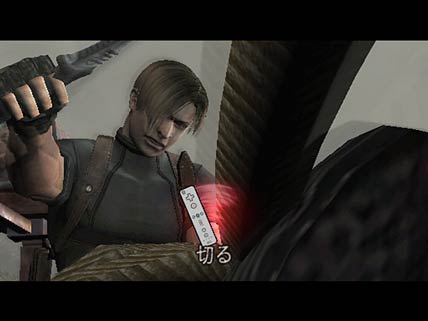 Resident Evil 4: Wii Edition is the best and most definitive version of one of the greatest games ever made. The new controls offer a more fun and intuitive way to play than before, while also serving as one of the most effective examples so far of the Wii remote applied to a shooter. It may be a port of a two-and-a-half year old game, and it may not look as good as it once did, but that does very little to detract from the sheer awesomeness of the experience. Resident Evil 4: Wii Edition is one of the best games available for the Wii. Period. Rating: 9 out of 10