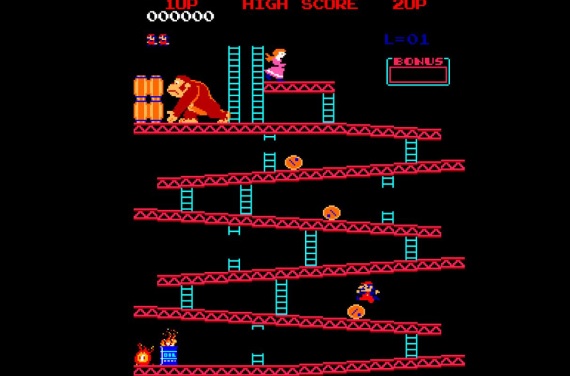 After months of continual prodding from my older brother, I finally got around to watching The King of Kong: A Fistful of Quarters at the local theater pub. The movie is a fascinating documentary about the efforts of a man named Steve Wiebe to break the decades-old world record on Donkey Kong. Seeing King of Kong was particularly meaningful for me because, in addition to being an avid videogame player, I have been extensively involved in competitive arcade gaming. As some readers may know, I am a world record holder on the arcade classic Star Wars (Atari, 1983).

The film does a great job of showing how an otherwise normal-seeming man could become engaged in something as strange as breaking a world record on a 25-year-old videogame. By the end, most of the audience members were enthusiastically rooting for Wiebe. Like me, Wiebe is one of a small group of semi-hardcore record breakers who live on the outskirts of the classic arcade gaming subculture. I’ll be the first to acknowledge that playing Star Wars is not that important in big picture, but most of the competitive gamers I’ve met over the years don’t seem to have that kind of perspective about their hobby.

Something that I’ve tried to convey to people who ask me about my Star Wars playing—and this notion figures prominently in the film’s subtext—is that going for a world record on something like Donkey Kong (or Star Wars) really doesn’t have much of anything to do with playing videogames. The game is just an expression of something else. It’s really about the desire to push oneself to the extreme, like climbing a mountain or running an ultra-marathon. Getting a world record on these classic games is an endeavor that forces a person to exceed the limits his or her reflexes, mental focus, and concentration.

People will do a lot of things in order to get a world record: eat 60 hot dogs in 12 minutes, hold breath under water for 15 minutes, run the hundred meter dash in 9.74 seconds. For me, videogames sit somewhere in the middle of these achievements. At the very least, people have certainly done much stranger things in the service of setting a world record than play Donkey Kong. So what can be said about competitive arcade gaming? To quote an article from the Yale Alumni Magazine, “It combines a fast-reacting, highly integrated nervous system with a drive to do things that aren’t necessarily that important.” Amen.