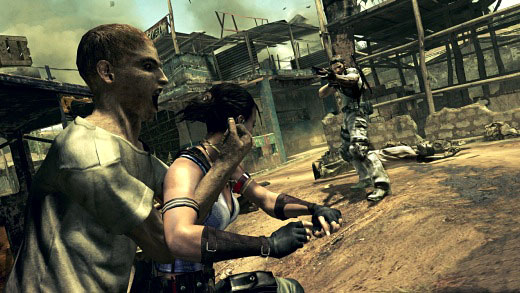 With Resident Evil 4 being one of my favorite games of all time, it probably goes without saying that I've been eagerly anticipating Resident Evil 5 ever since the first teaser images appeared in the summer of 2005. Now that I've had the chance to spend some time with the new RE5 demo, I thought I'd share some of my impressions, both positive and negative.

To start with the positive, RE5 looks and sounds fantastic. The sun-baked African setting is wonderfully polished and detailed, and the music does a great job of heightening the tension, creating a sense of frantic excitement while the player is being surrounded by infected enemies (zombies?). And I feel compelled to give a special shout out to the exploding barrels, which pack more visual oomph than any other exploding barrel in pretty much any other game I've played (and there are a lot of them).

While the game feels very similar to RE4, a lot of small improvements have been made on the gameplay side. It's now possible to assign items and guns to the d-pad for quick access, so there's no more going into the inventory screen to switch between the handgun and the shotgun. Items can also be picked up in real time, without a screen popping up like in RE4. These changes don't really break any new ground so much as bring RE5 in line with current standards.

The co-op is an excellent feature, and despite my initial reservations upon hearing about it, I'm pretty convinced that Capcom has made the right decision to build the game around a two-player experience. Interestingly, the top and bottom halves of the split-screen are staggered so that the top half has a black bar to the right and the bottom half has a black bar to the left. I like the way that it preserves a more natural screen ratio for each player while also making each half feel more separated and therefore easier to independently focus on. My wife and I played several rounds of co-op, and we both really enjoyed the sense of teamwork involved (e.g., grabbing enemies off the other player, sharing ammo, and reviving the other player with health spray). Now my wife is looking forward to it just so she can play it with me.

There are, however, some negatives. While I appreciate that it's now possible to strafe while walking around, I'm annoyed that it's still not possible to move while shooting. They're taking a step in the right direction here, but it's still just a baby step. Capcom needs to bite the bullet and bring RE5's gameplay in line with current standards. This issue doesn't destroy the game, but it definitely hurts it. Another problem is that the framerate can take a big hit during split-screen co-op mode, particularly when crowds of enemies are on both halves of the screen. This is just a demo, so hopefully they can iron this out before the game ships.

A final complaint I have is that the demo didn't include any interesting light-related visual or gameplay mechanics. The developers have been talking for years about how sunlight is supposed to play this special role in the game. For example, they've said that there will be times when the player's eyes have to adjust when moving from bright sunlight to dark indoors, resulting in times where the player enters a room and only gradually realizes that there are enemies inside. It was a bit disappointing to not see any evidence of that in the demo. Maybe they're just saving that stuff for the full game, but it would have been nice to see some firsthand proof.

Criticisms notwithstanding, it's a good demo and certainly does nothing to decrease my anticipation for the game. Here's hoping that Capcom addresses some of the problems that are evident in the demo before the final release.

I have to say that I agree with much of what you had to say except for one thing in particular. There are certain things about RE games that I’ve always enjoyed. The least of which is not the slightly awkward game play. I can not agree with you on changing the stationary firing position. I’m glad they decided to stick with the old convention here because I want to feel like I’m playing a Resident Evil game. We don’t want RE turning into something like Left for Dead now do we? (Not that there’s anything wrong with Left for… Read more »

The demo was ok. I think the camera gets to close to the character when you’re using your guns. You can’t see what is happening behind you. The camera should be further away from the character to still have an little bit of overview of the surroundings. Also the character movement is a little far from smooth… Hey, but this was just the demo. All we can do is hope…

This Demo was easy as 3.14(pie joke.) You’re all noobs if you had a problem with it. It wouldn’t be resident evil without these shotty controls, the game would be just stupid with gears of war controls. STOP WHINING AND GO PLAY LEFT 4 DEAD. It’s clearly all you guys have the skill for.

I played the demo and didn’t find the controls to bad, it would certainly make the game easier if you could move whilst shooting even if only at a slow pace. However the thing that annoyed me most about the game was the fact that once your weapon was discharged from firing at hordes of zombies you could not move and reload at the same time. I got cut by the chainsaw guy a few times because of this problem.

Aside from that though the demo was pretty good. Looking forward to the game.

Even though you praise co-op I personally feel that feature will murder RE5’s overall content and length compared to RE4 (which could last a remarkable 20 hours).

Games like Left 4 Dead are for people who constantly moan for co-op zombie killing, Resident Evil has and should remain a single-player affair to maintain atmosphere and the most polished and solid content available.

That’s a good question. I think that if they let players move around too fast while shooting that it could certainly detract from the Resident Evil feel. But I think they could still make it possible to move slowly while shooting and not really harm that aspect. It’s not even so much that I want to be able to move while shooting because it would make the gameplay easier so much as that it just feels unnatural that I wouldn’t be able to move AT ALL. But I don’t know. I think you make a good point. Maybe they tested… Read more »

I played the demo and *really* hated the controls. Considering that RE5 seems to be an even more action-oriented title than it’s predecessor it’s frankly absurd that the developers haven’t moved significantly further towards a conventional third-person camera/control scheme. The demo could get almost as frantic as your average Gears of War session, and the current controls just can’t keep up with that kind of pacing. It’s not the least bit “immersive” (to use the most overused and nonsensical cliché available these days) if the only thing it does is add to the player’s frustration…

As you have played RE5 and I haven’t, how much of an effect do you think the fast-moving zombies had on that decision to only allow for shooting while standing in place? Granted other games allow for that, but it sounds like adding that feature will bring Resident Evil completely into FPS territory: fast enemies, circle strafing, run and gun gameplay. Maybe Capcom is still concerned with maintaining tension during enemy encounters and forcing (encouraging) players to do more running. If you are stuck in place while shooting, you are going to go somewhere advantageous before discharging a weapon. Yeah,… Read more »