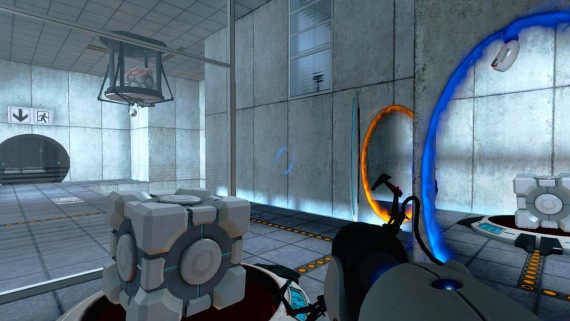 Having recently received The Orange Box as a Christmas gift from my dad, I can now count myself among the multitude of lucky gamers who have experienced Portal. Yes, Portal is an awesome game. Yes, the gameplay possibilities that come from the portal mechanic are mind blowing. Yes, the game’s computerized antagonist is amazingly funny and threatening at the same time. But as fantastic as it is—and it is indeed fantastic—one of the biggest revelations I’ve had as a result of playing Portal is the concept of in-game commentaries.

Portal’s developer commentary is accessed in a special mode in which various “commentary nodes” are placed prominently throughout the game. Activating these nodes causes a relevant audio clip to play, revealing the developers’ thoughts and observations about the design process. I’ve never come across any game that includes in-game commentary, and so I don’t know whether or not this idea is completely new. But regardless of whether Portal is the first to do this, I think it’s a brilliant idea that I would like to see more developers follow.

The idea behind DVD commentaries is that the viewer will watch the film once and then watch it again with the commentary track. Obviously, it would be absurd to expect a player to replay a 40-hour game just to hear a commentary, and even more absurd to expect the developers to record said 40 hours of commentary. But for a game that can be completed in one sitting, like Portal, this idea actually makes a lot of sense. In fact, I would argue that any game that players are highly likely to play more than once would benefit from in-game commentary.

At first, I questioned why Valve had chosen to implement its commentary via player-activated nodes rather than having it play automatically, like in a DVD. But since games are such a fundamentally different medium than films, I suppose a videogame commentary ought to be incorporated differently than a film commentary. If a film commentary is accessed while the film is re-watched, then it makes sense that a game commentary would be accessed while the game is re-played. That being said, I think there are ways that it could be improved.

I found it problematic that the game’s action did not pause while the commentary clips played. As a result, I sometimes couldn’t hear the commentary clip due to noise from the actual game. If I paused the game to listen to the clip, the commentary clip would also pause, so there wasn't an easy way around the issue. Rather than place “nodes” throughout the game, however, the developers could have just had an onscreen prompt appear whenever relevant commentary snippets became available. This would reduce the visual clutter created by the “nodes.”

But whether or not videogame commentaries are a new idea, the increased storage capacity afforded by next-gen game formats makes it one whose time has clearly arrived. Obviously, there is no one way to incorporate a commentary into a game, and developers will have to be creative with how they choose to include them. But however they get implemented, in-game commentaries strike me as a fascinating new means of giving players insight into the game design process. I look forward to seeing other developers expand on what Valve has done.

I first encountered developer commentary in Chronicles of Riddick: Escape From Butcher Bay, and as awesome as that game was the first time around, that commentary mode made it even better. I find them significantly more interesting than movie commentary. I think because I actually have aspirations to make games and find the nuts and bolts very interesting, whereas for movies I find behind the scenes information tends to spoil my immersion.

Interestingly enough, this increasingly popular feature has even spread to the independent gaming scene. The adventure game developer Dave Gilbert (www.wadjeteyegames.com) have so far been including unlockable DVD-style commentaries in all of his commercial products (The Shivah, Blackwell Legacy, Blackwell Unbound).

I loved the Orange Box commentaries as well, and made me realize that I’d have absolutely no problem spending 20 bucks on short (3-6 hours) but high quality games that are loaded with DVD style special features and replay. Heck, it would be the same reasons I’d buy a DVD movie.

There is a small list of games with commentaries on the wikipedia page about audio commentary, though i’m not sure how complete it is. I personally discovered videogame commentaries in Tomb Raider Anniversary and it’s an extra that I wish was used more often. Nice to see Valve has decided to champion this wonderful idea. The List: Star Wars Rogue Squadron II: Rogue Leader The Chronicles of Riddick: Escape from Butcher Bay (PC Version) Tomb Raider Anniversary Half-Life 2: Lost Coast Half-Life 2: Episode One Half-Life 2: Episode Two Portal Team Fortress 2 Since Rogue Squadron 2 was released as… Read more »

It’s not quite the same thing, but Mass Effect’s Limited Edition came with *extensive* developer and artist commentaries on the bonus discs, giving some really fantastic insight into the creation and thought process behind elements in the game. it was one of the better LE packages i’ve seen, totally worth it.

also, IIRC God of War 1 and 2 both had some developer commentaries as well. not as in-depth as Portal’s and not in-game, but still worth a look-see.

Sly Cooper has in-game commentary. I didn’t listen to it because I didn’t want to replay the game.

Sam & Max Season 1 also has commentary but you download a video instead of replaying the game.