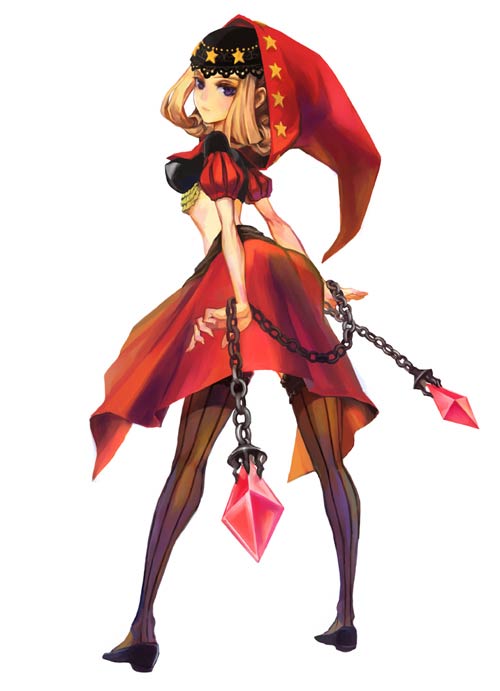 When I first started reading about Odin Sphere, I felt convinced that it would be just the kind of game I would like—intricate storyline, gorgeous old-school 2D graphics, exciting side-scrolling beat-‘em-up action. How pleased I was when I finally popped in the game and was greeted by the beautiful opening sequence. The graphics were even better than I had expected, and the story immediately drew me in. Then I started to play the game, and everything slowly unraveled, my high hopes crushed. Looking back, I can only conclude that Odin Sphere stands as a potent example of how tedious and frustrating gameplay combined with excessive load times and a shoddy frame rate can wreak havoc on an otherwise praiseworthy game.

Part action game and part role-playing game (RPG), Odin Sphere tells the stories of five separate protagonists, each from one of five warring kingdoms. Going through each story in turn, players get to witness the larger narrative unfold through the eyes of all five characters. The plotlines cover roughly parallel chronologies and often intersect along the way, resulting in an intriguing dynamic in which the villain in one story may be the hero in another. Key events are seen from multiple perspectives, with the player gradually learning about the personal motivations and back-stories of the characters involved. Since one storyline must be finished before starting another, however, the layered plot structure does take some time to pay off. 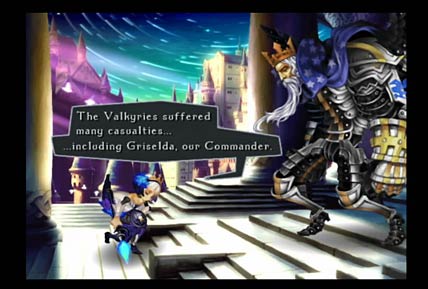 The elaborate story is supported by perhaps the best 2D artwork I have seen in a videogame. Given the dominance of 3D gaming and the steady push towards photorealism, it’s nice to see a game that bucks prevailing trends. The visuals resemble a lovingly painted graphic novel, brought to life with vibrant colors, and infused with a sense of depth through use of subtle animations and background layering. The stylishly drawn characters and enemies—some of whom almost fill the entire screen—include some of the most impressive and richly detailed 2D character designs to grace a videogame. If nothing else, Odin Sphere proves once again that games need not be rendered in 3D to be visually compelling.

Unlike most RPGs, Odin Sphere lacks any kind of explorable overworld. Instead, players move tiresomely from battle to battle, punctuated by the occasional dramatic cut-scene or a stop to buy items or supplies. Although the levels appear horizontally linear, they actually behave like a loop in that moving far enough to the left or right will eventually bring the player back to the same spot. Players advance only after defeating all the enemies in a level, which can sometimes involve dozens of enemies and even gigantic screen-filling bosses. While repetitive battles are standard in most RPGs, without an open world to explore between the fighting and cutscenes, the battles quickly turn into a long and wearisome grind.

The battles might have been tolerable were it not for the simplistic and unbalanced fighting system. Oddly, the game’s only attack button is also used to block; however, since many enemies have non-defendable attacks that can instantly kill the player, blocking is virtually useless in practice. Attacking too fast drains the power gauge, leaving the player temporarily vulnerable. As a result, players are forced to engage in an irritating hit-and-run style of fighting, constantly dashing back and forth across the screen to take potshots at the enemy. It’s a shame, because had the designers given players a greater range of melee attacks and a useful means of defending themselves the fighting might have been quite fun. 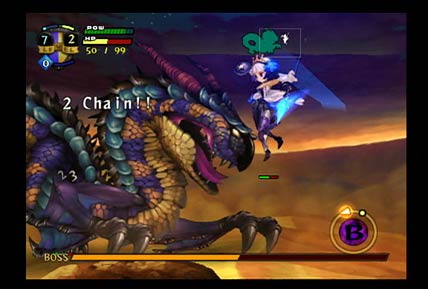 As if these issues weren’t enough, Odin Sphere suffers from crippling slowdown and maddeningly-long load times. It’s hard enough slogging through a painfully repetitive battle only to have the frame rate go spasmodically out of whack while being bombarded with enemies. This slowdown often results in accidental death and having to start over, but not before sitting through the game’s load screen, which consists of the now-seared-into-my-brain image of the words “now loading” slowly revolving around an open book. Almost as frequently, players are treated to a fancy transition screen that flashes the title of the current chapter, a regular occurrence during which I found it necessary to close my eyes to avoid getting a headache.

It saddens me that Odin Sphere didn't turn out to be a better experience. I want to see more games that go against the 3D grain by using high-quality 2D artwork. I want to see more games with unconventional narrative structures. But with its subpar gameplay and technical flaws dragging it down, I fear that Odin Sphere will do a poor job of furthering the cause. Rating: 6 out of 10

Odin Sphere is the worst game experience I’ve had since I played everquest. It starts off enticingly enough, pretty visuals, making potions is fun, interesting story… but then as you start to grind through the same levels for each character, and end up making the same damn recipes over and over and over just to stay alive, the fun goes away, yet for some reason, the game wasn’t bad enough to just quit, so I came back. Then towards the end, the last book “Armageddon” is available, and the only way to prepare characters it to play them in their… Read more »

You are so wrong on many levels, it’s not even funny. This game is one of the most fun experiences I have ever had. “Then towards the end, the last book “Armageddon” is available, and the only way to prepare characters it to play them in their old book, but it starts them at SQUARE ONE, no access to the upgrades they need to fight the final bosses, so you wind up grinding MORE to get to a point where you can grind to prepare them.” You lie about that. When you start over with the characters in their respective… Read more »

I so often disagree with reviews on this site, but I’m so happy to see an HONEST review for this overrated pile of dung that has gotten rave reviews from the great majority of other gaming websites and magazines.

Odin Sphere is the unfortunate proof that all you really need is graphics to impress most gaming critics today. Style over substance. Kudos to you for pointing out its shallow game play instead of LYING about its depth like most other reviews.