According to ESRB, this game contains: Fantasy Violence, Mild Language, Suggestive Themes, Use of Alcohol 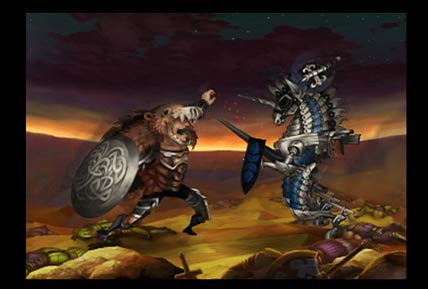 Parents have little to be concerned about. While the relatively mature story and dialogue may not be suitable for younger kids, teenagers should be completely fine. The game does contain death and violence, but it is handled tastefully.

Fans of Role-Playing Games may appreciate the visuals and story, but the constraining linear gameplay, lack of character customization, limited battle options, and absence of an overworld to freely explore will probably come as a disappointment.

Fans of 2D Fighting Games will find the combat simplistic, repetitive, and dragged down by long load times and repeated slow down. Although the battles may superficially resemble a 2D beat 'em up, they do not play like one. Consider this fair warning.

HDTV Owners should be aware that this game is presented in 4:3 mode and does not support widescreen or progressive scan.

Deaf and Hard of Hearing gamers can read the dialogue from speech bubbles, comic book style. There are no significant audio cues that impinge on gameplay, and important character stats are displayed on screen.