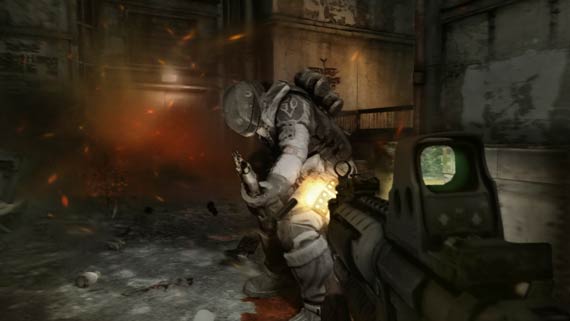 Last month's issue of the respected journal Developmental Psychology details a study on the possible links between aggression and wishful identification with violent game characters. The study, which involved 112 adolescent boys, concludes that "identifying with violent video game characters makes players more aggressive." While this conclusion is not surprising, and will most likely just confirm most peoples' fears about videogames, I found a couple much more fascinating results buried in the article's discussion section. These are:

Both of these results seem to fly in the face of the conventional wisdom about videogames. The first statement confirms something that I have actually been trying to articulate for a long time, but have often felt unequipped to do so. The second statement also goes against the idea that the (supposed) negative effects of videogames are heightened by increased realism. These conclusions are worth pondering, and I'm surprised that the authors didn't highlight them more in the article.

Also of interest is the way the researchers measured aggression. After playing a randomly assigned game for 20 minutes, the subject then played a competitive reaction-time game against another boy. (For ethical reasons, the game was rigged to make it seem like they were playing against someone.) Before starting, the subject was told to select the noise level (from 0 to 10) of a sound that would be blasted in the opponent's headphones if he lost, with the added warning that a noise level of 8 or above could cause permanent hearing damage. The point was to get an idea of the subject's willingness to inflict unprovoked harm.

On its face, I find this approach potentially problematic. First, some (though not all) young adolescents cannot fully grasp the notion of something having a permanent effect. If someone is fundamentally incapable of understanding what it means to cause permanent hearing damage, then such a warning would be lost on them. Second, many adolescents are used to having their parents and authority figures try to scare them with warnings about how dangerous everything is. Someone who has been overloaded with deterring statements might be less likely to take what adults say seriously, instead figuring that they are just exaggerating. Finally, given that the subjects don't actually see the results of what they are (apparently) doing to their opponents, the scenario could be too abstract and unrealistic to apply in everyday life.

Despite these reservations, I believe the researchers did a creditable job with this study. While I'm usually skeptical of studies that claim causative relationships (correlation is not causation), in this case I don't think the authors are venturing too far beyond what the data supports. The games that the boys played prior to the aggression task were assigned at random, ruling out the possibility that more aggressive subjects were simply more likely to choose violent games. In addition, the games were divided into four categories using input taken from a separate group of adolescent boys of comparable age to the test subjects. Incidentally, the games used in the study were as follows:

With the possible exception of Final Fantasy, the above groupings appear reasonable. At the very least, the fact that they were organized based on feedback from adolescent males lends some added credibility to the article.

In the future, I hope to see more research that examines the connection between perceived realism and levels of immersion. Although not the focus of this particular study, the finding that perceived realism does not necessarily influence a player's feeling of immersion has important implications for how game developers approach their work.

I really, really doubt your idea of adolescents not understanding about permanent effects. I assume that by “young adolescent” you meant age range 9-11. At that age, I recall, I definitely understood this idea and much more. Do you know where you got the results from? Not all scientific studies are accurate, and I would like to look at the way they got to that (false) conclusion.

I’ve read the article a few months ago and wrote my opinion in my blog. I should point out that realism and immersion did have moderator effect on identifying violent characters. So more real and immersive characters would have a stronger effect. However, I agree that the authors did not looked further into realism and immersiveness which raised my doubts because they asked 4 questions about it. On the noise blast task, that task was performed in previous studies because I think there is the need for standardization and ethical issues. I think they addressed your concerns in another paper,… Read more »

Adam, thanks for the tip. I hadn’t heard of that book, but I’d be very curious to read those sections pertaining to immersiveness. I would imagine it has areas of overlap as well as areas of divergence with the videogame medium. I’ve often suspected that the so-called immersiveness of games is more a function of player interaction than realism. That being said, I haven’t done a significant amount of reading on the subject. Janarius, I agree that the researchers would need to create a more robust study to corroborate their findings on realism and immersiveness. It was not a central… Read more »

Personally, I have long deferred to Scott McCloud’s expertise on the matter. Understand Comics pretty much made the case, for me anyway, about the degree to which realism is required for immersive storytelling. The fundamental points were so solid, I had very little trouble translating his theories to immersion in videogames.