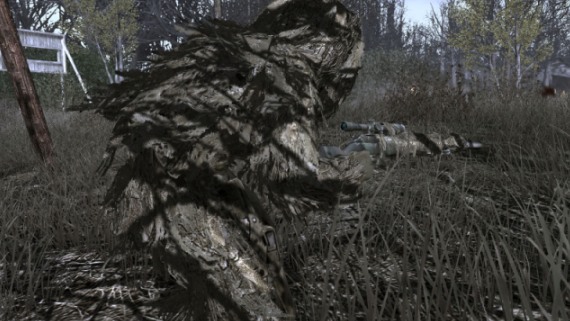 Frankly, I haven’t played nearly enough games this year to justify making a “best of” list. (The Orange Box, Halo 3, Mass Effect, and Rock Band still await me.) Not only that, but I think “best of” lists are usually far too subjective to warrant the concreteness with which they’re presented. That being said, I still got to play some truly exceptional games this year. For those who might be interested, of the games released in 2007 that I have played, the following three were my favorites.

With its slick, action-packed campaign and simple but gripping storyline, CoD4 proves—to me at least—that there is no substitute for a highly polished, cinematic action game. For all the fun that I’ve had in the past playing relatively nonlinear sandbox-style titles like San Andreas and Oblivion, I usually end up coming back to the games that strive for nothing more than taking the player on an awesome ride. Resident Evil 4 did it, God of War did it, and Call of Duty 4 definitely does it.

More than any other game I played this year, Super Mario Galaxy tapped into that core place within me that registers pure and uncomplicated gaming joy. This finely tuned gravity-bending platformer may not be deep or meaningful—few games are—but it is compulsively engaging, and stands as a shining example of why games (and the enjoyment we derive from them) are so qualitatively different from that of books and movies. Super Mario Galaxy is unadulterated fun.

Although its core gameplay may not be as revolutionary as fans had initially hoped, BioShock is an incredibly creepy and fascinating first-person shooter filled with brilliant art design that does a fantastic job of conveying a distinct sense of place and an intriguing set of ideas. It also made me think, not just about the Rescue-or-Harvest dilemma but also about the philosophy behind its beautifully realized world and the unstated assumptions about how players approach videogames.

Three games. Three vastly different design philosphies. One puts players in the middle of a tightly scripted action epic, another engages players with tried-and-true platforming mixed with brain-teasing physics and gravity, and another presents players with moral dilemmas and “emergent” gameplay. There are many more 2007 games that I want to play, but these—which represent only some of the wide range of available gaming experiences—have impressed me the most so far.