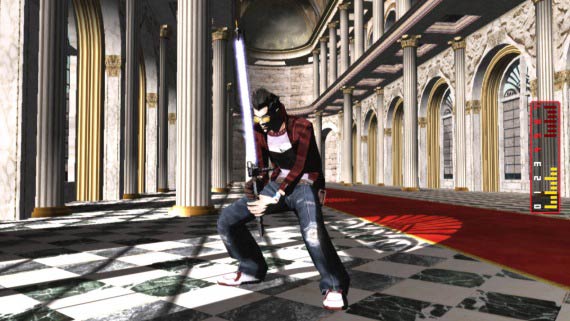 After listening to Jonathan Blow’s “Design Reboot” lecture last December, I made a small resolution that I would try to reduce my time spent on games that rely on meaningless reward systems. What had really struck a chord for me in Blow’s talk was the way that he equated these types of games to eating fast food. For him, World of Warcraft (which I’ve never actually played) is essentially a game that rewards players not so much for solving difficult puzzles or honing specific skills but rather for simply “running a treadmill.” As a person who wants to have a meaningful life, this notion really stuck with me. Putting it into practice, however, has proved tougher than I thought.

Fortunately, at least some of the games I’ve been playing recently—Portal and Half-Life 2 in particular—do an excellent job of providing meaningful and interesting gameplay. And while I haven’t actually rid myself of games that contain meaningless reward systems (Would that even be possible without giving up games altogether?), I'm at least becoming more aware and somewhat less tolerant of games that make me feel like I’m just running on a treadmill. My experience playing No More Heroes, for instance, has actually provided me with a good illustration of both mindless drudgery and meaningful gameplay and storytelling, all within the same game.

The real meat of No More Heroes consists of a series of one-on-one battles between the protagonist, Travis Touchdown, and ten bizarre and colorful assassins. For the most part, I’ve found the stylishly violent boss battles and their associated comic-book style cutscenes to be quite fascinating. Unfortunately, getting to these various boss encounters requires that the player earn money by running around the city performing repetitive side jobs. In addition to finding this rather boring, I also find it somewhat insulting. It’s as though the game is telling me, “Your time isn’t that important, so I’m just gonna force you to mindlessly jump through a bunch of pointless hoops.”

It’s easy for me to identify and criticize the drudgery in No More Heroes because I find it boring. But it’s not as easy for me to recognize pointless gameplay when I’m actually enjoying it. That’s probably why it’s been so hard for me to put my resolution into practice. In Super Mario Galaxy, the player only needs 60 stars to beat the game, yet I still felt irresistibly compelled to get all 120, regardless of how much time it took. Why? To play as Luigi, I suppose. In Resident Evil: The Umbrella Chronicles, I’ve been sinking hours and hours into getting an S rank on every level just so I can unlock the infinite ammo option. What’s the point? I think it’s a valid question to ask myself.

I’m not saying there’s something inherently wrong with trying to get all the stars in Super Mario Galaxy. But it’s not above questioning. Reward systems exert a strong pull with a lot of game players. Oftentimes it seems that all a developer has to do to extend the life of a game is to add some arbitrary unlockable item. Is Super Mario Galaxy a better game because players can play as Luigi after getting all 120 stars? Is it good that Call of Duty 4’s multiplayer gives players a specific icon next to their name for leveling up through all 55 experience levels 10 times over? I think that many of us game players allow ourselves to be too readily manipulated by these systems.

This is a complicated issue. The variations in how reward systems are integrated into videogames lie along such a broad continuum that it’s hard to draw any clear lines separating the good from the bad. God of War and World of Warcraft both contain reward systems, but no one would liken playing God of War to running on a treadmill. To be honest, it’s not really clear to me at what point that line gets crossed. I’m sure I’ll play many more games over the years that involve their fair share of mindlessness. After all, there’s nothing wrong with a little mindless fun. I just hope that this medium will continue to grow into something that goes far beyond virtual fast food.

I’m apparently in the minority, but I didn’t think the in-between side jobs (i.e. mini-games and assasination missions) were all that bad in No More Heroes. Once I figured out how to speed up the bike and drift, I could speedily traverse Santa Destroy. I don’t think I had to do any of the side jobs more than once; and averaged one or two assassinations to earn money between rounds; so a side job and mission between each boss fight weren’t all that bad for me. I still got through the game in twelve hours or so, and that includes… Read more »

You’re quite right Goatart, and I agree that games haven’t yet escaped the dependence on other art forms. Like I said, I don’t have the vision to articulate means with which to do that, but I’m pretty sure unique, distinguishing luddic techniques already exist in embryonic form in today’s games (some of them maybe even not so embryonic). In ten years’ time hopefully we’ll look back and be stunned we didn’t recognize the seeds of future design norms which I’m sure are all around us. But, reflecting on my previous post I realize what I was trying to say is… Read more »

But games do reward players. For one example – have you played Shadow of the Colossus? That game might be the pinnacle of rewarding gameplay; and it rewards us with beauty. Each and every colossus was introduced with an awesome cinematic, and was of course awesome in and of itself. I got shivers watching it, every time. There is no grind, simply because there are no other enemies. All that’s there is you, them and the land (not level or terrain, but land, which makes all the difference). What you’re doing most is riding through the land, which is a… Read more »

I second what you’ve written Killah_mate. I’m happy to read that someone else is equating the ethereal quality/aesthetic of SOTC (and Ico could be on that list as well, along with a few others) to the beauty of a Malick film. I too think videogames have the potential to push us, but just as film escaped the chains of theatre (or has it?), videogames too, must escape the conventions of cinema, and really take advantage of their own means. Achievement points do not fall under the unique means I’m referring to, and for the most part, are irrelevant to my… Read more »

What is a meaningful reward system? During the 8 bit era was finishing a level just so you can see the next level meaningless? Are achievements on XBOX meaningful at all. All challenges come from yourself. If you expect the game to reward you, good luck.

Good post, Brandon. I’m not sure, but I may be in the lead for “most jaded critic” here at GC, and it’s precisely for the reasons outlined… tasks designed to extend playtime with little entertainment value or creativity in design. experience grinding, random battles, keyfetching, backtracking… the list goes on and on. i’m done with all of it. As others have commented, as a player gets older i’d suspect that tolerance for this kind of crap design is lessened. personally, with such limited playtime, i have zero patience for games that test mine with conventions and crutches that don’t belong… Read more »

I really enjoyed the character interaction of dedicated Neverwinter Nights persistant worlds. It was more about have fun RP conversations in-character than who is the highest level or has the awesomest item. I found that strategic/tactical multiplayer with non-persistant rewards are more enjoyable than “keeping up w/ the Jones’s” MMOs. I really appreciate games that require you to invest some creativity instead of just merely repetition and time. That’s kinda the essence of play: creatively messing with your surrounds trying to discover new knowledge. MMOs are great for in the area exploration, but there is usually very little creative outlet… Read more »

I am not trying to collect all the Stars in Mario Galaxy, I just want to see all the levels and the variations within them. All the Star really does to me is mark the end of the level. It just ends the challenge so as I progress through I am not doing it to say ah ha one more, I just know that the next level is opened up. I guess you could say that the collecting in that game is really an illusion. Unlike No More Heroes the tasks are not as mundane you play levels to access… Read more »

There’s a difference between getting all the stars in a Super Mario game and the infamous leveling treadmill in MMO’s.

Finding and succesfully reaching all the stars is an interesting challenge in and of itself, without much repetition as each star is uniquely placed*.

If you had to defeat a level over and over again (perhaps to gradually unlock different levels or skills) that would be more akin to a type of mindless reward system.

*correct me if I’m wrong; I’m basing this on my experience with other SMB titles.

Ha…I can’t quite remember when it happened, but one day I just woke up and realized I no longer played games for fulfillment. If a level took hours to figure out how to beat, I just looked up the FAQ. If the last boss of a game was making my life hell, I just went on YouTube and watched the ending.

I dunno…one day I stopped investing time into video games and just started using them to kill time.

“I think that many of us game players allow ourselves to be too readily manipulated by these systems.” Yep, I have to agree with that. I think this is something that becomes more apparent as you get older and your spare time is increasingly precious. And it’s arguably one of the reasons gamers often shed their ‘hardcore’ identity and become jaded as time passes. I can think of much better examples than Mario Galaxy though. I mean, who would stop at 60 stars just because you can see the credits at that point? Surely that would be mindless considering you’ve… Read more »