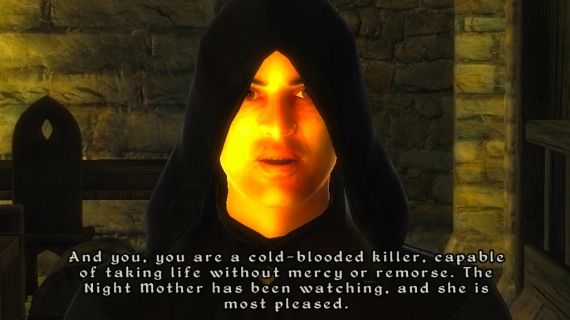 Like many others, I thought BioShock was an amazing game. The art direction was brilliant, the atmosphere was tremendously creepy and beautiful, and the question of whether or not to rescue or harvest the little sisters presented a challenging moral dilemma—at least initially. Nevertheless, I've recently been playing a game that has taxed my morality far more than BioShock ever did. I'm talking about The Elder Scrolls IV: Oblivion. Let me explain.

When I started playing Oblivion, the various discretionary quests always struck me as essentially virtuous: saving people from monsters, rescuing people from caves, finding people's lost heirlooms. These were well intentioned acts that, for the most part, made me feel like a pretty noble guy. Everyone wanted my help, and I was happy to do whatever I could to help them. I even joined the highly reputable Fighters Guild (which requires a clean criminal record) and progressed through the ranks, honorably completing each of my contracts. Then things started to change.

One night, a mysterious character approached me and offered me a chance to join the secretive Thieves Guild. I was hesitant to tarnish my character's reputation, but the idea intrigued me. I joined up. Several assignments later, however, it became clear that even the infamous Thieves Guild was not entirely without virtue. The missions usually involved stealing from the rich to feed the poor and foiling corrupt officials; and killing was strictly forbidden. It seemed that even the "darker" quests in Oblivion would always be imbued with at least a sense of semi-righteousness. Then things really started to change.

A man in a black cloak named Lucien Lachance woke me up in the middle of the night and said that he knew I was a killer. He had been watching my progress for some time, and was now prepared to offer me a chance to join a mysterious group known as the Dark Brotherhood. All I had to do was travel to a remote inn and secretly murder a man named Rufio. I was given no reason for why this man should die. The choice was entirely mine. I could proceed with the game and never hear from Lucien again, or I could complete this cold-blooded act and gain entrance into the Dark Brotherhood. I found Rufio. I killed him. Lucien was right about me.

Since making that fateful choice, my membership in the Dark Brotherhood and subsequent ascension through its ranks has aroused in me more moral discomfort and genuine thoughts of "this feels wrong" and "why am I doing this?" than I have ever felt while playing a videogame (and that includes such supposedly immoral fair as Grand Theft Auto). Deciding whether or not to help or harm a little sister in BioShock was tough, but only the first time the choice was presented. I chose to rescue the little sisters because I wanted to be good, even though I knew it might make the game more difficult. In Oblivion, the choices felt different.

The vast majority of the quests in Oblivion are completely optional. Some of these quests present small moral dilemmas (e.g., lie to protect someone vs. uphold the law), and if the quest itself seems immoral, the player has the option of just ignoring it. The player need never pursue membership in the Dark Brotherhood in order to complete the game. Initially, my main motivation for fulfilling the game's more depraved quests was a desire to get the most out of the experience—that, and a dose of curiosity. But I never expected that my curiosity would lead me to perform such heinous acts or to feel such moral ambivalence.

For one of my assignments, the Brotherhood sent me to a mansion in which five strangers had been locked. My job was to enter the mansion, talk to the trapped guests, and then find a way to kill each one in secret. As I spoke to them I got a real sense of their personalities, their backgrounds, and their thoughts and feelings about one another. They seemed like real people with real problems. Even though the Brotherhood wanted me to believe they had it coming, it didn't make it any easier. After killing my first victim, I immediately felt a distinct twinge of uneasiness. I never felt this disquieted after shooting an innocent bystander in Grand Theft Auto.

After a while, I found myself rationalizing my bloody deeds. It was just too hard for me to complete my assignments otherwise. I would tell myself that the Dark Brotherhood must have its reasons. Surely these people did something to deserve their fate. Gradually I came to rely on the other seven assassins who shared the underground sanctuary with me. I regularly conversed with them about the history of the Brotherhood and sought their advice and support. Even a ruthless assassin needs a few constants in life, and my fellow killers made me feel less lonely amidst all the wanton bloodshed. That's what made my next mission so difficult to swallow.

The assignment (entitled "Purification") came from Lucien himself. There had long been rumors of a rogue assassin who had already killed several members of the Brotherhood. In fact, some of my associates had told me about it back when I first became a member. Lucien now believed that the assassin was from my sanctuary. To eradicate the threat, I was to kill all seven of my comrades—a ritual of purification. I couldn't believe it. Just when it seemed like things couldn't go any further, the game pulled the rug out from under me. For me, this was far more morally twisted than “harvesting” a little sister. The path before me looked very dark indeed.

What did I do? I carried out my task, and I haven't looked back since. I've performed many more assassinations since then, usually without thought or hesitation. One task required me to wipe out an entire family. I started with the elderly mother, whom I found tilling the soil outside of her quaint farmhouse. She immediately mistook me for a courier she had requested to deliver gifts to her kids. She seemed like a sweet old woman. After she handed over the list of addresses, I stabbed her and then proceeded to systematically track down and kill each of her four (adult) children, one by one. Afterwards, I collected my payment from Lucien and moved on to the next assignment.

What makes the violence in Oblivion so weighty and morally problematic is that the inhabitants are given lives within the game. They have homes and families and occupations. They converse with one another. They have their own petty conflicts and disagreements. But most of all, they have names. These people are more than mere "little sister" archetypes. When one of the citizens in Oblivion dies, that's it. Whatever unique interactions the player might have had with that character are gone. Nobody will come and take his or her place. Forget BioShock or Grand Theft Auto. When it comes to stoking the player's moral ambivalence, Oblivion far outdoes them all.

Bioshock…I completely finished this game within one month…Will review it once I play this again..Wait.

Mr. Erickson, if you think that “Oblivion” is the ultima ratio in “moral challenges” when it comes to computer games, what will you do once you discover “The Witcher”? Build a shrine for it?

When it comes to moralistic story-telling in videogames, I had almost lost hope. Good to know there’s a game that gets it right now and then.

My son played the Elder Scrolls 3 Morrowind and had me playing it as well. Everyone in the game is related somehow and the names are all cool. Thanks for the outstanding summary of this one! Enjoyed the read, you made it visual. Thanks.

Glad you discovered the joys of Oblivion. Clearly the Dark Brotherhood questline at once the most compelling piece of writing to be found in the game, as well as having the most interesting missions. There are more twists yet to be discovered in the questline, as I’m sure you would’ve uncovered by now. Thanks for reminding me what a beautiful game Oblivion was, how it’s able to write characters where the audience is drawn to them, then determines their fate, and is left to mull over the consequences of those actions. Strange reading your connection with so many of these… Read more »

Huh… I thought you were gonna talk about The Witcher…..