Falling off Buildings in a Single Bound 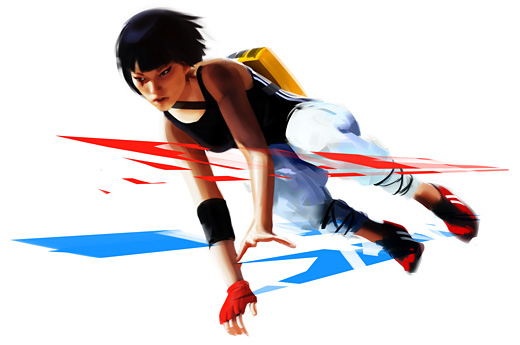 HIGH The exhilaration of fluidly navigating across multiple rooftops.

LOW Harsh gameplay that frequently brings the action to a screeching halt.

WTF Being attacked by a former wrestler named Ropeburn.

At the risk of oversimplification, I'm just gonna come right out and say that Mirror's Edge is essentially a first-person parkour simulator—parkour, for those who don't know, being the art of navigating through an environment as quickly and fluidly as possible. (The opening chase scene in Casino Royale provides a good example of this.) Sure, there's a flimsy plot thrown in as well as some disposable hand-to-hand combat and gunplay, but ultimately Mirror's Edge is all about the parkour, and it's in this respect that the game truly distinguishes itself. It's a shame then that it stumbles and falters so consistently, due to some unforgiving gameplay and poor design choices.

Mirror's Edge puts players in control of Faith, one of a small group of "runners" (read: parkour practitioners) tasked with delivering physical messages between various revolutionary groups fighting against an evil totalitarian regime that rules the city. The plot, which involves a political assassination, some double crossing, and a former wrestler named Ropeburn (not an important character, but still quite memorable), barely held my interest, but it furnishes plenty of opportunities for Faith to run from one area to another, sometimes chasing after enemies but more often being chased or shot at.

Visually, Mirror's Edge has a realistic yet highly simplified look, relying on bold colors, clear lines, and sharp angles. The design style serves to highlight the underlying geometry of each area, making it easier for players to see the interactive possibilities. While the rooftop and subway areas look impressive, the office and sewer areas look downright bland. One could argue that the graphics aren't meant to be dwelt upon, and though the presentation is mostly good enough, I can't help feeling that it could have been made much more interesting while still retaining the benefits of its simplified aesthetic. 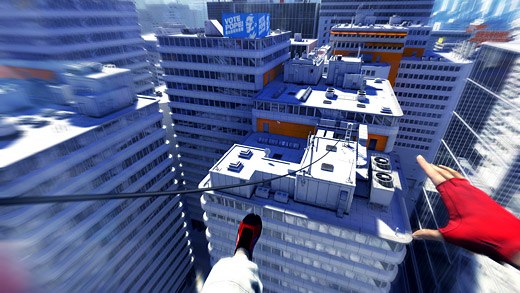 The real selling point of Mirror's Edge, and perhaps its only selling point given the disposable plot and unexceptional presentation, lies in its often-exhilarating first-person gameplay. The camera shake, the sound of Faith's feet and breath, the screen blur, and the sound of air rushing by, all of these little touches do a wonderful job of transporting players into Faith's body, and help set a new standard for creating a sense of physical presence in a game world. I think other first-person games, regardless of genre, would do well to take notes.

Unfortunately, the gameplay is much too exacting for its own good, requiring excessively precise timing and directional accuracy, whether sliding under beams, climbing ladders and pipes, leaping over fences, sprinting off walls, sliding down wires, or swinging off poles. I'd also love to know what possessed the developers to assign the jump command (the single most important action in the game) to the left shoulder button. With such quirky controls, they absolutely should have offered a customizable control scheme. Thankfully, most of the interactive features are highlighted red, allowing players to spend less time analyzing their surroundings and more time going really fast. This is great, except that the strict gameplay and weird controls result in a lot of plummeting to one's death. A lot. Days later I can still clearly hear the disturbing sound effect of Faith hitting the ground when she falls to her death.

The running gameplay is also regularly interrupted by woefully uninspired enemy encounters. Fighting usually involves disarming and knocking out enemies via timed button presses (made easier by the slow-motion button, because I guess slow motion looks cool) and then squeezing some rounds off the enemy's gun and quickly discarding it. Wash, rinse, and repeat. While this is okay in small doses, it wears thin when players are obliged to spend more than a few seconds at a time fighting bad guys. In a game that places so much emphasis on acrobatics, guns and bullets just feel out of place.

In the end, Mirror's Edge is a great set of core mechanics wrapped in a mediocre game. When everything is going smoothly, the experience can be exhilarating. Unfortunately, the flow is cut off too often by frustrating gameplay (e.g., dying 20 times in a row on the same jump). If the developers would go back and ditch the guns, redesign the controls, make the gameplay a little less draconian, and come up with a better story, then we might be looking at game of the year material. As it stands, Mirror's Edge is an important game for the way it helps evolve first-person design, but it's just not a very fun one. Rating: 6.0 out of 10.

Disclosures: This game was obtained via publisher and reviewed on the Xbox 360. Approximately 7 hours of play was devoted to single-player modes (completed 1 time).

Parents: According to the ESRB, this game contains blood, language, and violence. As far as T-rated games so, Mirror's Edge is relatively tame.

Deaf & Hard of Hearing: Dialogue can be subtitled, and there are no essential audio cues.

I think Mirror’s Edge succeeds strongly in emparting to the player the feeling of ESCAPE. Fight or flight; Running, jumping, falling, *panicking*… Vertigo. Airy space. Not since the first Tomb Raider have I held my breath so much during a jump, and I kindof like it. It’s refreshing to play a slippery yet underpowered character. The game may not win any awards for story, but the gameplay definitetly raised my heartrate- moreover, that feeling of pulling off a difficult jump or move and surviving was worth the hassle of repeating it. I am actually compelled by the gameplay to practice… Read more »

I was thoroughly impressed with not only the design and graphic elements, but the game play was tight and slightly more interesting than many within its genre.

I Hyped Mirrors Edge on Everhype and gave it 86% which I think is fairly accurate.

There is really not much to talk about, I don’t understand why people defend such a title of any criticism. It doesn’t really bring anything new to the table, regardless whatever the article may have missed out on it was spot on about the game play. It has a twitchy and sometimes overly exaggerated element about it, there are no surprises which is good but is a let down by pitfalls like agents with guns or roof tops with way too many obstacles to lounge around. Its just one of those bargain titles like someone pointed out and even then… Read more »

This is a very poor review. Not once does the reviewer even make reference to the true heart of the game: time trial and speed run modes. And it seems apparent, based on the 7 hours spent with the game, that the reviewer did not even attempt them. The average person would not even know these extensive modes exist, let alone learn that they provide its core replay value. And this is the first I’ve heard of so-called widespread complaints about the controls. I just haven’t been seeing them, either in reviews or in discussion forums.

I hate to sound so negative, but I can’t shake the feeling that this is one of those games that i’m going to pick up for twenty dollars and then feel like I wasted my money. = P

There were reports about Mirror’s Edge’s controls way back when the game was first demoed. Journalists watching others play would note how much trouble most people had with the controls.

When someone asked the designer or producer of the game, he seemed to be dismissive of such complaints claiming he (and his team) wasn’t making the game for “most people.”

Such a statement is prophetic, seeing as most people didn’t buy the game and many just dislike it.