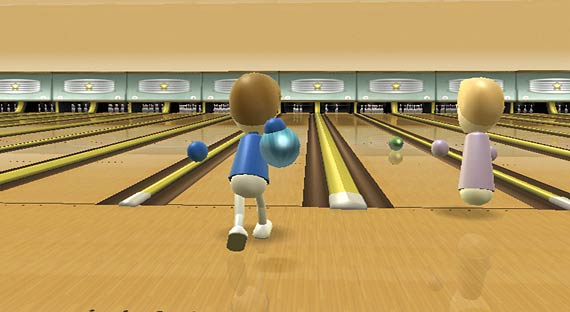 Having been a Wii owner since back in early December of 2006, I thought that this might be a good time to sit back and reflect a little on my feelings about Nintendo’s system, and in particular its unique control interface. Now that the novelty has worn off, a number of questions come to mind: Is the Wii really all it’s cracked up to be? Does the Wii remote actually improve the gameplay experience? Do motion-sensing controls really do all that much to increase the player’s overall enjoyment or sense of immersion? For me, the answer is yes and no.

With the Wii, Nintendo has done an amazing job of attracting non-gamers and former gamers alike. In this respect, the Wii has been an unequivocal success. Even my heretofore non-game-playing fiancé has gotten sucked in. Of the four games that she plays, all but one are on the Wii (the exception being Guitar Hero, which could also be played on the Wii if we had that particular version). I may never be able to get her to play Gears of War on co-op, but she regularly joins me for sessions of Wii Bowling, Super Mario Galaxy, and Resident Evil: The Umbrella Chronicles.

While the Wii has certainly made an impact on non-gamers and former gamers, there is still the question of how it has impacted players who were already comfortable and proficient with more complex dual-analog controllers. For my part, I can’t honestly say that I’ve had any more fun playing a good Wii game compared to a good Xbox 360 game. Of course, fun is largely relative when it comes to games (as I discussed in my post on the theory of videogame relativity), and the novelty of even the most radical technological innovations will always wear off over time.

A good control interface, whether or not it involves motion sensing, needs to offer a reasonable degree of precision and reliability. Failing to meet these basic conditions generally results in a game whose controls do little more than get in the way of the experience. On the flipside, a good control setup ideally should be reliable enough that the player can eventually forget about the controls to the point where he or she feels intuitively connected to what’s happening on the screen. Unfortunately, the Wii remote has frequently done a miserable job of achieving this ideal.

Numerous Wii games have been ruined by spastic and unreliable control schemes, including Sonic and the Secret Rings, Tiger Woods PGA Tour 08, and Boogie, just to name a few. In virtually every case, the problem comes down to poorly implemented motion-sensing controls. There are certain movements that the Wii remote simply cannot seem to detect with sufficient precision or reliability. Assigning the Wii’s sloppier motion-based features to gameplay mechanics that demand precision has been the fatal error behind most of these failures.

Despite these problems, there are still a few Wii titles out there that have actually succeeded in providing a control scheme that is not only precise and reliable, but that is arguably superior to what could be achieved with a standard dual-analog controller. In particular, I would cite Wii Sports (the bowling especially), Super Mario Galaxy, and Metroid Prime 3: Corruption as brilliant examples of this. If these were the only Wii games I had played, I would feel compelled to say that the system’s motion-based controls have truly enhanced the way we play games.

While the Wii isn't necessarily the revolutionary gaming experience that it's been cracked up to be and much of its library consists of games with poorly integrated motion-based controls, there are still a few gems in the mix. Hopefully, game makers will quickly learn from each other what works and what doesn't. Metroid Prime 3, for example, serves as an excellent template for how to successfully use the Wii remote in a first-person shooter. If developers continue to build and improve on these successes, then maybe the Wii will finally come close to delivering on its promises.

I think the Wii has succeeded tremendously and I have been playing games for 22 years. I only need one game as an example: Resident Evil Wii Edition. I think this game is much easier to play than the Gamecube version. My standard is how good can I play when I’m real f*cked up. Most of the times I give up playing video games when I’m wasted enough because the controls are way too confusing. I’ll end up jumping instead of swinging my sword or swinging my sword instead of jumping and falling off a cliff. Wii controls feel way… Read more »

I haven’t heard much about the ‘LiveMove’ middleware (the tech L.B. Jeffries referred to) since it was announced a while back. And I would have liked to as, having worked with the Wii’s motion controls, I have to say that they are very limited in terms of accurately registering gestures. It’s no surprise that the games that have worked best have either used the gyroscope simply (Wii Sports), sparringly (Mario Galaxy), or with enough imagination and variety that the player will accept inaccuracies (Zack & Wiki). I like the sound of No More Heroes’ usage too: justing tilting the remote… Read more »

I’m pretty sure Gamasutra did an article on the Wii remote explaining that it’s quite capable of sensing every twich and angle you do with it. The problem comes with programming the game to recognize the motions. It’s not like mashing X, which is a universal gesture to gamers. How much leeway do you give a gamer for a sword slash? Too broad, and the motion occurs when you don’t want it. Too narrow, and you have players waving their arms incessantly trying to find just the right gesture. It’s an ongoing experiment. There is already a company that is… Read more »