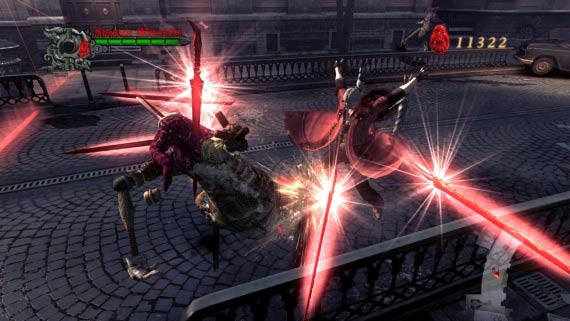 I finally started playing Devil May Cry 4 this week. Not bad overall. But after several hours of slashing away at unholy monsters I came upon a sudden realization: Devil May Cry 4's music really sucks. It's really, really horrible. In fact, it was actually getting in the way of my enjoyment of the game. Not only are there very few tracks, but the one track that gets played 90 percent of the time is extremely boring and repetitive. So all of this has got me thinking about the role that music plays in videogames.

For the purposes of this discussion, I'm not talking about music-themed games like Guitar Hero or Rock Band and such. Those are obviously all about music and the music ties right into the gameplay. What I'm talking about is games where the music is there purely for atmospheric effect or emotional underscoring. I'm thinking about games like Castlevania: Symphony of the Night, or God of War, or Resident Evil 4, or the Final Fantasy series. Although the music in these games has no influence on gameplay, it's clear (to me at least) that these games wouldn't have been quite as good if they didn't have such great soundtracks.

When I look back on the games that I've really gotten into over the years, particularly going back to when I was a young teen in the early nineties, I find that a lot of my favorite games became my favorites largely because of the music. Streets of Rage 2, Sonic CD, and Final Fantasy II immediately spring to mind. Those games had really great music, and I can recall wanting to play them again specifically to listen to the songs. But did it fundamentally make them better games, as far as gameplay goes?

In a sense, music can't really make the game part of a game better. As I've said, with the exception of rhythm-based games, music doesn't really have any connection to gameplay. Which kind of begs the question: to what extent is it fair to judge a game by its music? My gut response is to say that it's very fair. If a game has great music, I'll usually enjoy playing it more. Of course, soundtrack customization is becoming increasingly common, making it possible to make a game's music as good as one wants. But there's still the undeniable fact that music is external to gameplay.

I suppose it ultimately depends on the type of game. Big cinematic games like God of War use music in a way that enhances and reinforces its underlying themes and emotional energy. In other words, the music in God of War is an important part of the games art and overall presentation. But a racing game like Burnout, where music is more like listening to the radio, doesn't operate in the same way. All in all, it's a complex issue. In the end, I think that it's still fair to judge a game on its music. It's a part of the package. And although the degree to which it matters varies widely, it's still a factor. But that's just me. I'd be curious to know what other people think.

The best soundtrack of last year easily goes to Bioshock and Super Mario Galaxy, with Mass Effect running closely behind.

Honestly, I’m tired of ‘epic’ soundtracks like Halo and God Of War, even though they’re fantastic in composition, they don’t add to the overall experience the same way that the score in Bioshock or Mass Effect did.

Oh, and I completely agree with this guy about DMC4’s music, that one track was ridiculously over played and quite frankly not very good.

I always love great music in games, as a musician and songwriter its important for me that the scores of games suit the emotional needs of the gameplay. Loved the scores in games such as Shining Force 2, FF7 and 8, resident evil 2 etc. One game I actually turned off 20 minutes in was Prince of Persia: Warrior Within, because the distorted rock/industrial soundtrack was so completely absurd and preteen it eliminated any connection to the games actual soul. Scoring for games is the same as scoring for film, an art, a way to not only compliment, but to… Read more »

Music is essential too creating a mood in a scene. If you watch a clip of an alligator exiting a swamp with some ominous music playing, the alligator can look pretty intimidating. However, play that same video clip with some goofy circus music and the alligator is now something almost laughable. When you mentioned that DMC had such a horrible soundtrack, I was reminded of playing Armored Core 4, which also had an exceptionally repetitive and boring soundtrack. I really, REALLY liked the game play, but ultimately, I couldn’t bear to listen to the music playing in the background as… Read more »

Music can be essential to immersing you into a game’s environment in much the same way music can be used in movies to pull you in and make scenes more intense.

King Kong for the 360 comes to mind (as well as the film itself, obviously) – early on, a V-Rex attacks you. It’s pretty easy to run from, but the music makes you think it’s the most terrifying thing in the world and makes the part intense as hell. In fact, without that game’s overall sound design I likely wouldn’t have enjoyed it half as much.

“Of course, soundtrack customization is becoming increasingly common, making it possible to make a game’s music as good as one wants.”

Or as bad as the developer wants. I bet they are just waiting to establish micro-purchasable soundtracks on games that allow you to customise your own mix.

I’m being rather pessimistic here, of course. I find music an integral part of a game, and believe the choices a developer makes should be taken into account when evaluating a given title.

You nailed it with your description of Fade Away in GTAIII Zaphod. For me, that was a defining moment of the game too. Feeling an emotional connection to music that existed as part of a fictional city made the city feel so real, the immersion so complete. I’m not sure you can really recreate that feeling with familiar or custom soundtracks, and it’s unfortunate that Vice City and San Andreas (although their radio stations were great fun) never cemented their identities with ‘homegrown’ music. I wonder if anyone will make the effort to do that kind of thing again now… Read more »

I enjoy music in two ways, either it’s very good on its own, or it also compliments and enhances whatever activity I am doing. Driving and listening to music is a good example of this. Driving while listening to techno (Supermayer – Two of Us) is so good some times. I find myself dreaming up car chase sequences while I’m driving. It’s a little fucked, but anyway, this is how music should function within games. As was noted, music is not part of the game proper. It is true that the game experience would not be the same without the… Read more »

I completely agree. Music is a large part of the emotional journey that you go through while playing a game. The interesting thing is that almost the same thing can be said for sound effects. If the sound effects aren’t right, then the experience is not quite what it could be.

Audio is a big part of game development, and only a few developers realize it.