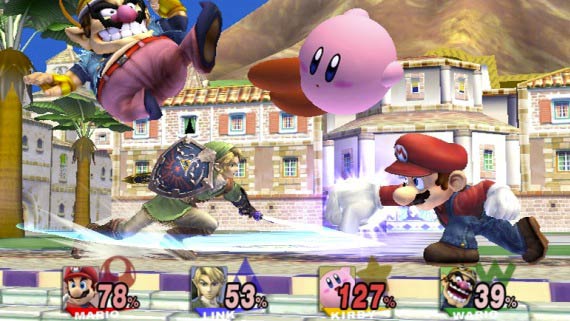 I can't count the number of times I've heard people talk about getting bested at a videogame by a kid. These stories typically involve people in their thirties (or much older) playing games with their sons/daughters (or nieces/nephews or younger sisters/brothers or younger cousins or friends' sons/daughters, etc.) and getting totally dominated, which then leads them to write on their blogs or talk to their friends about how they can't believe how good this kid is at playing videogames. We've all heard some version of this, or perhaps experienced it firsthand.

Whenever I hear these stories I think to myself, "Of course this kid is good at games, what else does he/she have to do?" or "Just because you suck at videogames doesn't mean this kid is some prodigy that you need to tell the world about." Maybe it's my own competiveness. Maybe I'm too jaded to be impressed by it. But for whatever reason, the phenomenon of older people expressing utter disbelief at the videogame prowess of kids has always left me a little cold. What's so remarkable and awe inspiring about a kid who's good at videogames? Big deal.

I've been thinking about this ever since my 16-year-old brother moved in a few days ago. (It's a long story, but basically he got suspended from his hyper-religious school and will be staying with me for a while.) Videogames aren't allowed at his school, so he hasn't played much lately. I, on the other hand, have been playing games regularly over the past several years. Clearly, I had the advantage. So imagine my surprise when we started playing Super Smash Bros. Brawl and he repeatedly clobbered me in match after match. Granted, he played the previous Smash Bros. games when he was younger, but not any time recently.

It didn't make sense. I'm a seasoned videogame player. I've won competitions. Is there just something inherent in the way the teenage brain works that makes them better at certain kinds of games? Later, we switched over to Call of Duty 4. (He'll be 17 in less than two months, so I figured an M-rated game would be okay.) Much to my surprise, he really struggled with the controls and barely qualified as a "recruit." This was interesting. He had played Halo on the PC several years ago, but he had no appreciable experience with dual-analog first-person shooters.

I'll be interested to see how good my brother gets at CoD4 (if he decides to keep playing it that is). If he quickly surpasses me in skill, then I'll have to assume that either I'm getting old and slow or that teenagers have some kind of innate advantage when it comes to this stuff, or a little of both. If, however, he plays it a lot but doesn't get crazy good at it, then it might suggest that there is some sort of "critical period" for videogame skill acquisition. Neither my brother nor I played any first-person shooters as kids, so we may have equal difficulty in mastering them.

This makes me wonder if gaming skill operates similarly to language acquisition. Maybe my brother's early-life exposure to previous Smash Bros. games gives him a built-in advantage that my practice will never overcome. It could be that after age 12 our brains can't instinctively master certain gameplay styles that we weren't previously exposed to, hence my suckiness at newer fighting games. I'm not saying older people can't master new gameplay styles, but rather that there might be a developmental cutoff after which achieving such mastery becomes much harder.

I'd be curious to know what others think. Is there a "critical period" for videogame skill acquisition? Do teenagers have an innate advantage when it comes to videogames, besides being blessed with more free time?

Good point, free time is a factor too but real skill comes from these inherent traits in people, skills aquired through hard work and enjoyment. It’s for the love of the game, children have more fun playing games then adults but things like grown gamers slow reaction time is a crock, Snakes a geezer but his hands work. Really it’s a question of how much someone cares about the games or anything really. I suck at basketball but does that mean i missed a developmental step? Or do i simply not have that unexplainable passion that drives people to love… Read more »

Brandon Erickson at Gamecritics puts forth an interesting question. Is there a “critical period” in children for learning video game skills, the same as there is for language? It doesn’t preclude the learning of languages, or the innate hand-eye coordination specific to video games, later in life, but it may explain why younger kids who grow up using controllers second nature will, depending on the game, always whip the ass of an adult who learned on that stupid Colecovision phone-looking thing. Using Super Smash Bros. Brawl as an example, Brandon tells us his brother, with little current gaming experience, utterly… Read more »

i’ve had this conversation with my mates and here’s is the reason.

my example will be on cod4

my brain has had 16 years of self inflicted punishment such as alcohol, tobacco, poor diet and drugs.

their minds should be pure like the driven snow in comparison.

essentially it’s like comparing a brand new car versus a million mile sh!theap!! no chance in a drag race

i’ve had this conversation with my mates and here’s is the reason.

my example will be on cod4

my brain has had 16 years of self inflicted punishment such as alcohol, tobacco, poor diet and drugs.

their minds should be pure like the driven snow in comparison.

essentially it’s like comparing a brand new car versus a million mile sh!theap!! no chance in a drag race

Yeah, i believe that there is a point at which one develops the “prime” skills for video games. I’m 21, I grew up in a lucky time, because since the day i was born we had a commodore 64 and a nintendoMS, and since then, i’ve had a genesis, saturn, 32x, 3do, playstation, ps2, xbox, 360 and ps3, and what i’ve found, is that my friends usually kick my ass on any football game (madden), and i can never figure out what i’m doing wrong! It must be the exact same frustration that the writer of this blog was feeling… Read more »

I wouldn’t think that gaming is a skill like language, though it probably is a skill. Like anything, if you start young, you’re going to have an advantage. Take Professional athletes, they generally have played their sport from a very young age, and they usually credit the hours of practice as what got them to where they are, though of course some natural ability is usually in place too. Reaction time is sure to have some effect as well, it starts dropping once you hit your 20s, so in that sense a teenage will have an advantage. Still, I’m sure… Read more »

Super Smash Brothers Brawl was designed in such a way that it would be very difficult for a significant difference in skill to exist between two players. It was designed so that skill plays only a minor role in who wins. It was made much slower than Melee, important techniques such as L-canceling and directional airdodging were removed, players now automatically grab the edge if they come anywhere near it while in the air, analogue shielding is gone, the characters all have easy recovery, combos have been removed because of the lagginess of all the attacks and the greatly reduced… Read more »

A really interesting article, at the age of 28 I’ve wondered the same thing. I played counter strike for years and learnt alot of about the limits of people vs time spent playing. childrens minds have much faster delevopment than adults so you are quite right. Fps games are quite different. The same way that strategy games are different again. An adult with experience in fps games will have a tactical and strategic advantage but I’m sure if you played a cod4 map where aim and reflexes were everything you’d be defeated soon enough. Although you may need a younger… Read more »

Interesting – I first got XBox Live last October and I really struggled to pick up COD4 on mutliplayer, it was the first games I’d played regularly against human oppononts in about 10 years, but, I also play Fifa 08 and I was kicking ass!

When I was a kid I constantly played soccer games and even won competitions, but FPS games didn’t get popular until I was about 18/19 and had lost interest in gaming and taken up chasing women (now I got a woman the XBox is my best friend.)

I remember seeing a show on the discovery channel where scientists were trying to teach a femle chimp (who had a baby chimp clinging to her) how to use a computer touch screen with different programs. She couldn’t quite get it. Several months later, the baby chimp was given a shot at it and had performed amazingly. They moved the baby chimp on to PAC-MAN and it can play better than any human I have ever seen. There is probably a video on youtube or elsewhere, but I don’t have the time to look for the link now as I… Read more »

My first exposure to video games was about around 4 yrs old when i played Pacman and other games on my relative’s Atari. When i was 5 or 6 i could figure out how to play the Ancient Art Of War At Sea on the XT on my own. (My First PC game!) Since then i have played on various platforms (NES,Sega,various generations of PCs etc). So as far as gaming goes,i was rather early in becoming aquainted. On the topic of wether earlier exposure will give an added skill advantage,i believe that this is true. Although i am a… Read more »

Could it also be because he’s just more into Super Smash Bros than you? And vice-versa on Call of Duty 4?