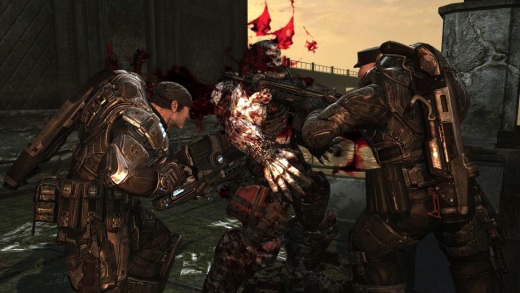 I finished the main campaign in Gears of War 2 last night after chainsawing my way through hundreds of locusts and being sprayed by about a thousand gallons of blood. It was a pretty kick-ass experience on the whole, filled with over the top set pieces and so-bad-its-good dialogue. Given the extreme Gears of War-ishness of it all, however, I was taken aback by two surprisingly dark turns in the story, including one moment that nearly brought tears to my eyes. How could this be possible? Let me explain.

Before I go on, I should warn readers that I'm heading straight into spoiler territory here, so consider this fair warning.

The first scene in question is the one in which Marcus and co. find Tai after he's been tortured. Up until then, the game had done a pretty effective job of establishing Tai as a super badass dude who is practically indestructible. Even Marcus seems to regard Tai's toughness with a certain awe and respect. The game really had me believing that Tai was a new character that was here to stay, and within the context of the Gears world I actually thought he was a pretty cool character. So when Tai chooses to take his own life with a shotgun to the head, I was pretty shocked. I wouldn't say I felt incredible emotional about it per se, but I was definitely thinking, "Damn. That's some serious shit. That is really dark." I really had to stop and process things and ask myself, "Did that just happen?" It was pretty startling, but it still didn't prepare me for what came later.

The second scene in question is the one in which Dom finds his wife Maria. Although we never really get a sense of who Maria is, the game managed to get me kind of invested in her fate. By the time Marcus and Dom are going around the labor camp looking for her, I was really curious to know what would happen. Is she alive? Is she dead? So when they release her from the cell and she appears unscathed, I sort of let my guard down and was like, "Oh, I guess she's okay then." But then it is quickly revealed that she only looks okay because Dom's desire to see her has made him temporarily incapable of seeing how she really looks. When it's shown that Maria has actually been nearly beaten, worked, and starved to death and looks like a scarred, lobotomized, holocaust victim, it really sucked the air out of me for a minute. I just wasn't expecting to see that kind of imagery in a game like Gears of War 2. And despite the paper-thin characterizations, the story had provided just enough setup to really make that scene a punch in the gut.

I would never in a million years try to claim that Gears of War 2 has anything more than a B-movie level plot and characters that are shallow as a puddle. But I have to give some credit to the writers for crafting a couple of isolated moments that, as incongruous as they feel compared to the playful immaturity of the game as a whole, are surprisingly moving.

I don't think a video game has ever made me cry, but Gears of War 2 came pretty close. That's about the last thing I was ever expecting out of a Gears game.

Spoilers ahead… I agree with you on the Maria scene. I expected something bad to happen in that scene, and it plays out in a fairly traditional manner, but what makes it resonate more (at least for me) was the beginning. They fool you there for a second. I don’t think it’s a very profound scene in general, but it is pretty profound for Gears. I’m indifferent to the Tai scene. Tai was a character I expected would be a throwaway because you don’t seem to spend much time with him. His death scene didn’t even surprise me for some… Read more »