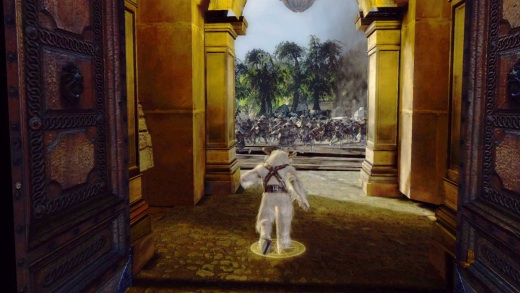 I'm gonna go ahead and admit straight out that I have an almost unshakable dislike towards movie-licensed games. In the same way that certain people are (often unfairly) judged by the legal system as guilty until proven innocent, I look at movie-based games as bad until proven good. I don't know exactly how this notion got cemented in my brain, but there's no denying it. I've tried to trace it back to some specific experience, but I just can't come up with anything. All I know is that I have a universally negative knee jerk reaction to movie-licensed video games.

I haven't played very many of them (mostly because I assume they'll be a complete waste of my time), so my stance isn't based on much experience. Let's see how many movie-based games I can think of right now. Aladdin for the Sega Genesis. I really enjoyed that game at the time. Back to the Future for the NES. Fantastic Four on the GameCube. Batman Begins. The Da Vinci Code. Played it, hated it. That's all I can think of. So far this doesn't really account for my position, because in the case of the last three games mentioned, I actually recall carrying a pretty strong anti-movie-based-game bias going in. As for the really old stuff for the 8- and 16-bit systems, I was much younger, and those were different times.

Is there at least some justification for my prejudice? Maybe I should try going pseudo-scientific here and take a trip over to Metacritic. I'll just search for the first movie-licensed titles that pop into my head. WALL-E. Scored a 51. Batman Begins. 64. Madagascar. 64. Iron Man. 45. Incredible Hulk. 55. Prince Caspian. 56. Those are some crappy numbers. I don't care what anybody says, if Iron Man scores a 45 on Metacritic, I don't need to play it to know that it's a waste of time. So yeah, there looks to be some strong evidence out there for the suckiness of movie games, but I can't say that the low scores are the reason for my dislike of them.

I think what it might come down to is that whenever I see a movie-licensed game, I tend to immediately assume that it was mindlessly cranked out by the developer as a quick cash in. And I think in most cases that's pretty close to the truth. While there are probably exceptions to this, it seems to me that making a video game specifically to coincide with the release of a movie is one of the most creatively bankrupt and baldly commercial endeavors imaginable. I have a hard to believing that anything made under such circumstances could be good, let alone artistically worthwhile. I love the movie WALL-E, but even without knowing it's Metascore I don't think anyone could pay me enough to play the game.

As someone who occasionally reviews video games, I know that I should be more open minded. I realize that I probably dislike these games more than they deserve (crappy though they undoubtedly are most of the time) and probably shouldn't dismiss the whole lot of them. I know I've heard tell of there being good video games based on movies, like Chronicles of Riddick, which is kind of ironic because by most accounts the movie is actually pretty shitty. Maybe only shitty movies can be turned into good games.

Another aspect to this is that games are just so fundamentally different than movies. If I were a developer and someone came to me and said I want you to make Prince Caspian the game, I'd be thinking, "God, what a horrible task." The two mediums are completely different, and the elements that make a great film may have little to no relationship to the elements that make a great game. Prince Caspian isn't exactly a great film, but I think my point still holds. Iron Man, for example, is a good movie mostly because Robert Downey Jr. is so hilarious in it. How the hell does that carry over to a video game? I'm a firm believer that video games are best when conceived as games from the ground up, not when they're based on source material from another medium.

Am I wrong? Does anyone feel the same way? Are there cases in which movies provide a good creative foundation for a video game?

Hey, Nice of you guys and gals to bring up the subject. Since you’ve all made good points, I’ll just add my 0,1 cents here : Goldeneye made me buy the N64 after playing it over at a friend’s house… This game is most definitely one of THE games for me, no comment. Hell, I may have my memory mixed up, but I think it even made me like the film (which is my favorite in the franchise) and consequently the whole JB movie franchise even more… This game should be mentionned in all and every articles and studies about… Read more »

Given the volume of Star Wars games, is it really fair to call them ‘movie-based’ any more?

At this point, I think of Star Wars as a series of games that also have some movies you can watch if you want the backstory.

Oh, and BTW – The DaVinci Code game rocked. Well, not rocked, obviously, but it was a solid entertainment, and the best DVC product there was.

I keep playing movie-licensed games in the hopes that “this one will be better,” and I agree with you. Like others have said, I think part of it is the rush to get the game out to coincide with the film release:”Charlie and the Chocolate Factory” was difficult only because of its bugginess. (Maybe games like the old “Aladdin” and “Lion King” weren’t so bad because less could go wrong in the 16-bit days). I also think that when you try to shoehorn an interactive game into the linear structure of a movie, something gets lost in the translation. A… Read more »

I agree that games being released to go along with a movie are pretty much bad. I don’t agree with the notion that a game based on a movie license in bad though. Sure, there are a ton a bad games based on movie licensed, but the Star Wars games have been pretty good, going back to the days of the 2600 and PC. The Empire Strikes Back (2600) may seem pretty lame today, but it was a solid title back then. X-Wing vs. Tie-Fighter is considered one of the best of its time. The Xbox had several solid Star… Read more »

Hey Brandon, You are totally right. Whenever I encounter a video game title based on a movie, then the exact same thoughts go through my mind. And to strengthen your opinion: it’s holds true the other way around as well. Do you know any really good movie based on a video game? Not even starting talking about the Uwe Boll’s flicks, I thought Silent Hill was ok – have to admit that I’ve only played the first hour of the second game, cos it’s too damn creepy – but most video game based movies are a pile of crap IMO.… Read more »

Overall, I agree. The vast majority of movie-based games wang chung. I think it comes down to the fact that, as you mentioned, most games are shoe horned into coming out with the movie they are based on. This was the complete opposite for the one exception that sticks out in my mind: Goldeneye. One of the high points of videogame history, and definitely the highest point of movie based games, Goldeneye came out ages after the movie was released, probably making most people think, “huh!?” But by loosely tying levels and missions to the movie and expanding on the… Read more »