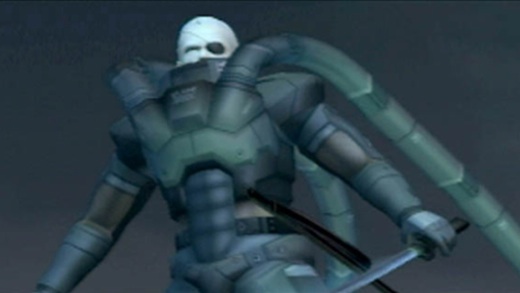 In an effort to prepare for Metal Gear Solid 4, I've recently been playing some of the earlier Metal Gear Solid (MGS) games. And while it's been really fun for the most part, it's also brought to mind some of my gaming pet peeves, not just related to MGS but to games in general.

MGS isn't the only offender of course, and lot's of games do this. I'm almost certain that there have been times where I found this out in a game the hard way (i.e., by complete accident). Imagine being half way through a movie, hearing the phone ring, then hitting the "pause" button on the remote only to see that instead of pausing the movie has skipped 20 minutes ahead. Then imagine that the only way to see what was skipped is to go back to the beginning of the movie and re-watch everything up to that point. If DVDs worked this way, it would be considered absurd. But gamers put up with this kind of crap all the time in games. It's stupid, it's ridiculous, and no game should ever be released without offering the ability to pause during cut scenes. End of story.

At any rate, thinking about this whole cut scene issue in MGS has reminded me that there are all sorts of ridiculous things that gamers have accepted over the years, maybe just because we were used to it, or that's how it had always been, or it seemed cool at the time, or nobody knew any better. Some of these things have come and gone, some have decreased or disappeared, some have gotten worse, and some are still here. I'm talking about stuff like save points, lame stories, crappy translations, grainy full motion video, unrealistic body movement, long load times, disc drives that sound like jet engines, bad voice acting, and needlessly overcomplicated menus. The list could go on.

So what are other people's biggest gaming pet peeves, present or past?

I think the Start button should be replaced with a Pause button and a Play button, where each is represented by the universally-understood symbols for Pause and Play. (That would be confusing on PlayStation given that there’s already a triangle button, but on any other console it’s a good idea.) The pause button would always pause, the play button would always let you start playing. I don’t understand why there’s still all this ambiguity of what the most basic buttons do.

My pet peeve with video games is now and ever shall be stupid limitations in the name of “natural” blocks. For example, in MGS 4 you can take down supernatural bosses, but you can’t climb over a box that’s chin high? You wear camo that can sense and adjust to its surroundings, but you can’t break apart a stack of wooden crates blocking a hallway? A tiny detail, but it annoys the hell out of me.

Yeah, considering the MGS series was at least 50% movie, the fact that you couldn’t pause the cutscenes was absolutely maddening. The same thing had happened to me – I hit start to pause it and skipped it entirely. That’s just stupid.

Fortunately most major games seem to be including this painfully obvious feature now.

i’ve cursed at this in too many games. videogames are a more interactive medium than video, yet during cutscenes they give you less control than a DVD or a youtube video! there’s no reason why they couldn’t give you pause, rewind, fast-forward and seek.

Actually, MGS4 allows you to pause all the cutscenes, or just skip them altogether. It’s one of the redeeming qualities of the game.

For me, it’s the awful tutorials. Remember Super Mario 1? No tutorial. Just world 1-1, go. I miss that in games. I spend the first 25 minutes of any given game being led by the hand trying to wrap my brain around its control scheme.