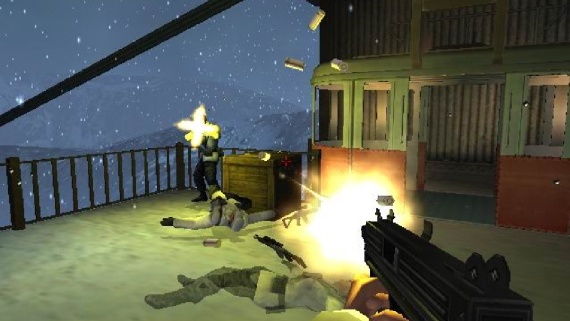 An article in the February issue of the journal Emotion presents some strange findings regarding players' emotional reactions to killing and being killed in a first-person shooter (FPS). In the experiment, a group of students played James Bond 007: Nightfire (Super Monkey Ball II was used as a control) while their facial expressions and physiological activity were tracked and recorded moment-to-moment via electrodes and various other monitoring equipment. Conventional FPS wisdom would suggest that players like shooting enemies and dislike getting shot. The research findings, however, paint a different picture.

From the article: "instead of joy resulting from victory and success, wounding and killing the opponent elicited anxiety, anger, or both." In addition, "death of the player's own character…appear[s] to increase some aspects of positive emotion." This latter finding the authors believe may result from the temporary "relief from engagement" brought about by character death. Whatever the underlying basis, however, the results seem highly counterintuitive.

My first reaction to the article was that something must have been wrong with the experiment. From what I recall playing Call of Duty 4, I most certainly did not enjoy being wounded and killed and I usually felt pretty satisfied after shooting an enemy. I don't entirely understand the researchers' method for measuring positive and negative emotions, and so I can't pass judgment on it. But suppose for a moment that their methodology is sound? Am I actually experiencing negative feelings on some level when I shoot an enemy in Call of Duty 4? I guess that would speak well for my morals.

The researchers also found that: 1) Players showed no signs of desensitization over the course of multiple play sessions; and 2) Subjects who tested higher for psychoticism (based on a pre-trial psychoticism questionnaire) experienced less anxiety from killing enemies. That higher psychoticism would correlate with lower negative feelings about violence is not surprising. It is interesting, however, that players showed no signs of physiological or emotional desensitization. While this doesn't necessarily disprove that desensitization to videogame violence can occur over long periods of time, it does suggest that brief exposure has little or no desensitizing effect.

Of course, more research would be needed to confirm these findings. This was a small study and the authors' conclusions are mostly tentative. But on the whole, an interesting read.

Lol…its called “Kill…kill…fun, aww i died, might as well chill for a bit till i respawn”

I don´t believe in emotional reactions for killing and being killed, it is only because the result of the game.

I personally could not disagree more. I play CoD4 and F.E.A.R regularly and gain no enjoyment whatsoever from dying and love to be nearer to the top of the leaderboard then everyone else. HOWEVER when i play at lans with my friends i know i enjoy dying a little bit more as it has more of a sense of “now i owe you one” which motivates me further to want to start winning and killing.maybee gamers are just different from other people. because this survey seems like it was done with the average joe public. not people who actually play… Read more »

I’d imagine there’s an element of observer’s paradox in there as well – were they playing against strangers, in the same room? In an overtly monitored environment? That’s hardly a typical gaming session. Some competitiveness index would be good, as would relating people’s reactions against their score (both over time and in relation to each other). There’s just so many variables they could have covered! What’s the relation to respawn time, team games vs. deathmatch, killing players you’ve talked to in real life or not… Still, kind of interesting.

Doug, not sure who you are angry at. But, you seem to be the person so far using the least respectful language. The rest of us are the players of these games and being fairly respectfull even if disagreeing with the results of the research. So who is the one being violent here? It is plain that human nature needs an element of violence. Our instincts are geared to survival in a world where violence abounds. Animals eat, and therefore kill, other animals, including humans. This is the world that formed us, like it or not. These games can give… Read more »

The test procedure isn’t described in a way that seems terribly sound. Though I’m not surprised by the results, when playing FPSs in the regular “lan-party” setup where you can see everybody (talk shit to everybody, be a wise ass to everybody, ‘grats a good shot by either friend or foe) I don’t get too upset about being killed every few seconds. Its not quite the same when I’m not in the same physical vicinity as the other players. Everybody is quiet with only the occasional shout across the house if something happens. Individuals get bored or tired of playing… Read more »

Once a killer always a killer. i’m an ex Army Ranger, and i LOVE FPS games. You could even say that to some extent, it’s more of a type of therapy for me. Civilians should realize that there are HUNDREDS OF THOUSANDS of people like me; highly trained ex malitia etc. with nothing to do, and no way to vent. These games are great training tools, and to some they’re more than that.

especially if you’re playing with friends. when you die, it’s like “ah, you got me!” you smile, you get ready to beat them back. But when you’re on a rampage, you’re grim, focused, concentrated. getting killed breaks that, gives you a little relief time.

people don’t play fps to be happy, they play fps to accomplish something, to hone a skill, to be (in a way) productive). That’s the deal.

There is absolutely no chance this is true unless frustration and a stream of obscenities directed towards your virtual killers mother is considered a positive emotion.

Next time you’re out in the world, as opposed to sitting behind a keyboard, please call someone a “stupid asshole” and tell them to “go to hell.”

tris, you are probably the only gamer to answer this question. it seems simple to me that you are exactly right and nailed it.

It’s all in the words you choose, now isn’t it? Let me summarize differently: Players feel RELIEVED, less tense, etc when killed. I can see how some outside egghead observer could interpret this to mean “feel better” and then other idiot readers interpret this to mean “LIKE TO DIE” in FPS games, but this ain’t the case. In a good game, you’ll be all revved up and tense… and then BANG, if you’re “dead” you get 10 seconds of respite. So yeah, you’re going to feel less tense, etc. You’re getting a break. And then conversely, shooting others adds to… Read more »

These so called “games” seem to automatically gravitate to extreme violence. Why? They only advertise that the originators have no desire to rid our world of violence. How very extremely stupid and boring(!!!!!!!!!!) You only promote more violence in the minds of people who support and use your completely dull and stupid
imaginings. I don’t have to tell you to go to Hell. you seem to
be creating it. You’re a bunch of stupid assholes. —Doug Rosbury

I need to see this research in more detail, but I believe the negative emotions are from shooting other *players* not from shooting NPCs. I would be very surprised to learn otherwise. I want to check some details here – if they are shooting strangers, that’s a different play experience to shooting friends, for instance. Regarding dying, they are only reporting some positive emotional elements. The capsule version is not telling the whole story here, as the negative elements are there (I’ve observed this myself in our research) – I believe they are just saying there is an unexpected positive… Read more »

You just need to read some of the comments to understand why it would seem that people dislike killing and like dying in games. The interesting thing is that these researchers obvioulsy NEVER played a FPS in their lives. First, you can tell by the game they chose, as someone pointed out: a game from 2002! (WTF!) Second, if you are a player, you know that there’s nothing better than killing your opponents and nothing worse then dying. I mean, I can get really stressed out about dying, but nothing makes me happier than kicking a** and killing everyone. Everyone… Read more »

I think the “temporary relief from engagement” hypothesis is dead on. They probably used a random sample of test subjects, and not a majority of real gamers. To the uninitiated, shooters can be chaotic and stressful. I’m sure novice players are entering the test with an already heightened level of stress or anxiety brought on by simply volunteering for something unknown. Apprehension would probably be the best word. But experienced gamers would enter the game knowing what to expect. Strategy and practiced reactions take over and the subject is probably at a reduced level of stress. I would be interested… Read more »

It would be nice if they did this tests on games where you had to kill other things than humans, such as Silent Hill.

Wow, these researchers are complete retards, in all honesty, some guy isn’t going to be full of joy because they just got killed, ffs at least use logic and don’t use emo kids.

There is one study that is a really old one, about the emotional reactions of gambling addicts to winning and losing. “Normal” people would feel excited when winning and disappointed when losing. There are, however, people who only play certain sums of money (their salary, for example) instead of some certain time (until bored). Those people tend to have reversed emotional responses: losing brings the game a notch closer to the end; winning prolongs it. The study concentrated on the slot machines, I think, where you only can play smallish sums of money every round (unlike no-limit poker, for example).… Read more »

I don’t know what kind of brain-dead monkeys they had playing this game, but they didn’t react like anyone I’ve ever seen, or like I play. I’m not super-emotive, but I have been known to utter a “HAH! Eat it, motherfucker!” or a giggle here and there when I really waste someone, or land an impossible shot. I am definitely let down when someone kills me, it’s not a relief, the whole point is the engagement, the player wants to be engaged. I’ve seen people jumping up and down screaming at the TV in anger when they die in a… Read more »

Are you serious? Most cultures thrive on death and destruction and enjoy it. Look what sells… Look at what people do when they pass by an accident. They don’t look away, they slow down and stare hoping to see something whether they want to admit it to themselves or not.

This study makes perfect sense. The key quote here is: “while their facial expressions and physiological activity were tracked and recorded moment-to-moment via electrodes and various other monitoring equipment.” Right. That doesn’t really give good insight into emotions, only into the outward signs of it. In psychology, we call intense immersion into an activity “flow” — and almost no activity better describes “flow” for most people than playing a game, especially an FPS. Just imagine yourself, or if you’ve ever watched your friends play FPSes — do you show any excitement or joy upon killing an enemy on your face?… Read more »