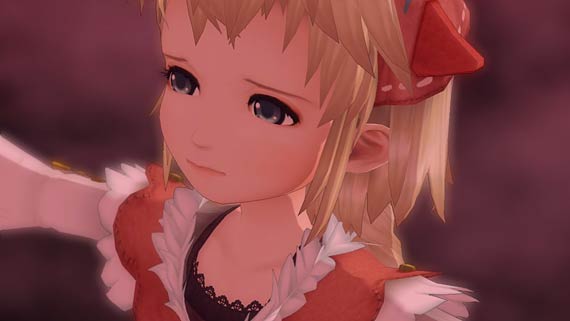 It seems that role-playing games (RPGs) will always entail at least a certain amount of drudgery, whether in the form of repetitive turn-based combat or item collection. This is to be expected. What makes the tedium tolerable, however, is a healthy balance of engaging gameplay, good storytelling, appealing characters, and high quality visuals and sound. The musically themed Japanese RPG Eternal Sonata strikes some pleasing notes with its excellent anime design, enjoyable music, unique combat system, and remarkably cheerful aesthetic. Unfortunately, the melody goes flat through lackluster story presentation, sluggish dialogue, and repetitive battles and dungeon layouts.

Eternal Sonata puts players in control of Polka, Beat, and Allegretto (as well as a host of other characters with various musically oriented names) as they attempt to save the world from the machinations of the evil Count Waltz. On its face, this basic premise would seem extremely familiar—even trite—were it not for one extraordinarily bizarre ingredient: all of this takes place inside the dreaming mind of Frederick Chopin. Yes, that Frederick Chopin. The internal story involving Polka, Beat, and Allegretto serves as a counterpoint (there, I said it) to a separate story set in the external “real world” in which the famous pianist and composer lies asleep on his deathbed.

Being a videogame, and a Japanese RPG at that, questions like Why would the dream world of a famous 19th-century composer contain things like save points and turn-based combat? and Would the real Chopin have fought monsters with a conductor's baton? are probably best left at the door. That’s right. In Eternal Sonata, the famous composer of the Revolutionary Étude and the Minute Waltz is a regularly playable character who fights monsters and casts spells with a magical baton. I wonder what Chopin would think? Despite the jarring absurdity of its overarching premise, however, what is initially most striking about the game are its outstanding anime-style visuals. 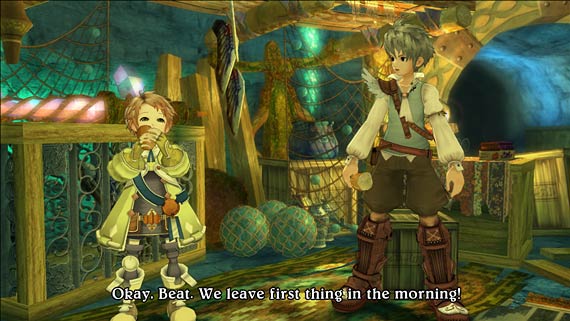 With its clean lines and vibrant colors, Eternally Sonata is about as pleasant to look at as any game I've played. The character designs have a wonderfully bright and crisp style, reminiscent of 2D animation. Forests come to life with lush green leaves and soft grass. The towns, with their storybook houses, sparkling streams, and colorful flowers, appear almost ridiculously quaint and idyllic. Even sewers and dungeons, places that would typically look seedy and creepy, seem downright inviting. This happy aesthetic lends the game such a strong aura of cheeriness that even the act of battling monsters to the death never feels particularly weighty or threatening.

As appealing as the visuals are, however, they can’t quite offset the game’s weak story presentation. Conversations come across as slow and halting, usually with a slight pause between lines that feels at least a second too long. These small pauses probably wouldn't be so bad if the actual dialogue weren't so excessively didactic. Rather than letting the game's themes naturally emerge through the characters’ actions, the writers decided to have them stated explicitly in the dialogue. Hearing down-to-earth characters wax philosophical about the “big picture” strains credulity. It’s not very noticeable initially, but the story scenes eventually feel slow and wearisome.

True to RPG form, the bulk of Eternal Sonata's gameplay consists of fighting enemies to earn strength and experience. In battle, players have a time limit in which to control each character, and quick thinking is often needed to get the most out of each turn. On the defensive side, the player can still influence the outcome by actively blocking or counterattacking. The close attention and fast reflexes required to perform these defensive moves adds a distinct element of energy and tension to what would otherwise be a somewhat passive affair. Overall, the combat system offers an interesting change of pace from the more leisurely fighting found in traditional RPGs. 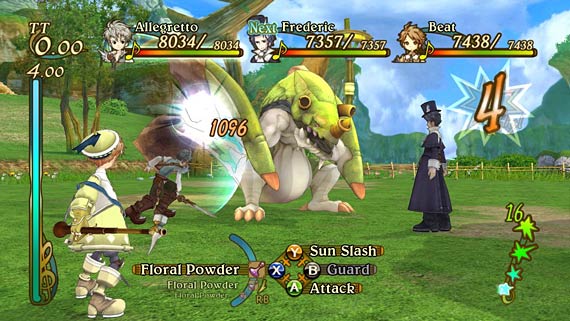 Thankfully, leveling up occurs relatively quickly, and since enemies are visible on the overworld, battles are usually avoidable. Gratuitous level grinding is kept to a healthy minimum, and as long the player fights most of the enemies encountered in the natural course of the game, then the characters should be powerful enough to progress. Nevertheless, some boring dungeon layouts combined with having to repeatedly fight identical arrangements of identical enemies makes roaming and fighting feel tedious. In isolation, the combat is more interesting than that of many RPGs. Unfortunately, the lack of variation across the game gives it too little staying power.

I was surprised that I didn’t like Eternal Sonata more. Its mix of musical themes and charming design seemed like a winning formula. The longer I played, however, the less fun it became. The engaging battle system eventually turned into a tedious exercise, and the lighthearted and sentimental story grew increasingly sluggish and labored. The game’s unforgiving “save point” system didn’t help matters—a small issue, but one that makes a big difference. There are so many things to like about Eternal Sonata, that it’s a shame it didn’t turn out to be a more enjoyable game. I can’t help but think that with a few small changes it could have been so much more than it is. Rating: 6.5 out of 10

to be honest, I rented it one time, beat it, and now I want to replay it. Especially encore mode.

I like the idea of Chopin fighting with a magical baton. After all, we have our own likes and dislikes. I really had a lot of fun with this game.

Plllllllllllllllllease don’t listen to this poster. Eternal Sonata is a woeful game. There is a skill in combining everything that has ever gone bad in a JRPG over the last 30 years into one game, but it isn’t a good one. These things are; – Cliche characters – State the obvious dialogue – Repeat the same points over and over and over and over – Repetitive battle system. It is really pathetic. The main selling point, the dark light thing, is implemented so poorly, you will hardly notice it. You’re characters abilities don’t change that much depending on their position… Read more »

Wow! Haha. The combat graphics look identical to Tales of Vesperia combat. The graphic style is also a bit similar. This game actually looks pretty good. After I finish with Vesperia, this is my next JRPG 🙂

Eternal Sonata offers a refreshing take on the JRPG market. With JRPG’s on the 360 coming too far and few between, Eternal Sonata captures players with awe-inspiring environments and unique characters. Supporting these environments and characters is the amazing story. You actually learn alot about Frédéric Chopin, his music, and his roots, and have a TON of fun doing it. The unique battle style is one of the best I’ve seen in any RPG to date as well. You don’t need to level grind that much, but I actually loved just going out and finding fights because the battle mechanics… Read more »