According to ESRB, this game contains: Fantasy Violence, Mild Language, and Use of Alcohol 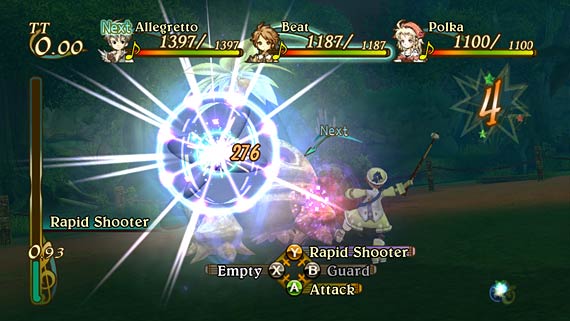 Parents needn't worry about letting their older kids play this game. The game's overriding tone is one of lighthearted cheerfulness. The violence is highly unrealistic and in no way disturbing or traumatizing. The above mentioned "language" and "alcohol" references are rare and minor. There is some human death, but this is handled very tastefully.

Fans of Role-Playing Games will probably have mixed feelings. Players who prefer leisurely turn-based combat will not enjoy this game's relatively active and reflex-intensive fighting system. Eternal Sonata's reliance on old-school conventions, like a fixed camera and separate battle screen, will probably appeal more to gamers with a preference for classic RPGs.

Deaf and Hard of Hearing gamers can follow the dialogue via subtitles. There are no essential audio cues. However, there is a "ping" sound during battle that helps indicate when it's possible to perform a defensive move. There is a visual indicator at the bottom of the screen as well; however, the absence of the associated "ping" sound could make it slightly harder. There is a side activity in which the player can perform duets with other characters using "score pieces." There are also several interludes providing historical information about Chopin and various of his compositions as they play in the background. The musical elements are not crucial to completing the game, and it is not necessary to hear the score pieces to play the duets. However, not being able to hear the music will take away some of the game's unique charm.