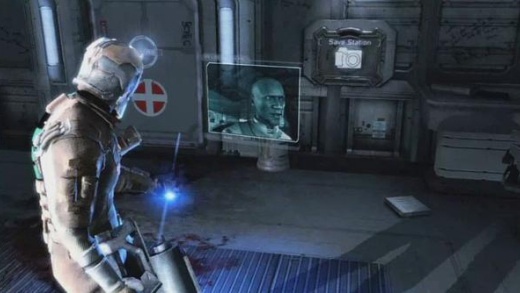 As far as the video game part of my life goes, last week was all about Dead Space. Well, I also finished up the original Metal Gear Solid (After the credits rolled, my mostly non-gaming wife aptly summed it up as "very Japanese.") but I digress. I rented the PS3 version from Blockbuster and played it steadily through the week until finally beating it on Sunday night. My wife was actually backseat for the entire duration, so props to her for sticking it out.

While I wouldn't consider Dead Space a truly great game, I do think it's a very good one. The graphics and sound are top notch, the zero gravity gameplay is quite cool, the story is decent (enhanced by watching the six downloadable video comics), and the game as a whole just does a great job of delivering the scares. Oh yeah, and I really dug the way the game handled being in a vacuum with no sound. Rather than talk about that stuff, however, I'd like to focus in on something that really stood out to me about Dead Space: the absence of a HUD.

Instead of having a life bar floating in the corner of the screen, the game cleverly integrates it onto the back of the character's suit. The same goes for the oxygen supply timer, and the stasis meter. There's a Metroid-style map for those who want to use it, but there's also the option (the basis of which I don't quite understand) of having the character emit some glowing energy from his hand that makes a line appear on the ground illuminating where to go. It's a huge crutch, but it's also a nice alternative to having to break the flow of the game by constantly checking a map.

It actually reminded me a lot of Shadow of the Colossus. The way that Isaac lifts his hand to illuminate where to go is reminiscent of the way Wander raises his sword to create a beam of light pointing to the next colossus. The Dead Space version of this mechanic is way less artful than the Shadow of the Colossus version, but it's still a cool way to allow players to stay immersed in the game. Of course Colossus still has on screen life bars, so Dead Space beats it out in that small respect. I suppose one of the benefits of having a main character with a bizarre mechanical suit is that it seems kind of believable to have all sorts of meters built into it.

I was really intrigued by the way the menus and video transmissions in Dead Space are presented as sort of a holographic projection. It's like a blend between a 2D image and a Star Wars-style hologram. I found it neat to be able to move the camera around the character while a video is playing and see it inverted from behind. The menu system doesn't feel particularly plausible or organic (Why would Isaac be projecting an image in front of him to view a list of the items he's carrying?). Yet, it serves its purpose of keeping players grounded in the game.

I appreciate it when developers go out of there way to reduce the amount of on screen indicators in a game, and I hope to see this tendency increase in the future. Resident Evil 5 appears to be doing that to an extent by not having a screen pop up every time the player picks up an item and by not requiring players to enter a menu to switch weapons. Alone in the Dark integrates the inventory into the character's coat, and even Fallout 3 (which admittedly has a lot of menus) uses the Pip-Boy device to make the menus at least feel a bit closer to the actual game world. Here's hoping that developers continue to invent new and more seamless ways of conveying necessary information to players.

I like Dead Space’s holographic interface, although when it comes to maps and inventory and such, it’s really nothing special. The first game I played that didn’t have a hud was Chronicles of Riddick for XBox. The ammo counters were on the guns, and all the other icons would appear only momentarily when they were necessary. I thought it added nicely to the immersion.