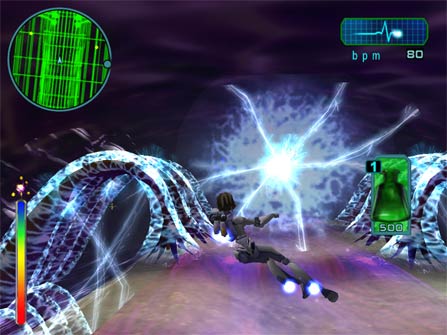 The September issue of the Journal of Adolescent Health details a study on the effects of playing Re-Mission, a third-person shooter in which (to quote the game’s website) players “lead Roxxi, a gutsy and fully armed nanobot, through a series of challenging missions and rapid-fire assaults on malignant cancer cells.” Developed by HopeLab, the game was designed to provide young cancer sufferers with a fun way to improve their knowledge of cancer and boost their confidence in managing the disease. Now that the results are in, how does Re-Mission fare?

To determine its effectiveness, the subjects (all young cancer patients) were given mini-PCs containing either Re-Mission and a control game (Indiana Jones and the Emperor’s Tomb) or just the control game. In the end, playing Re-Mission resulted in higher levels of understanding about cancer and its treatment. Although the subjects only completed a few of the game’s missions on average, their knowledge still went up, particularly in subject areas that were covered in the first few levels. This may look like proof of the game’s effectiveness, but significant questions remain.

Since the experimental group was not required to play both games, it could be that the kids who chose to play Re-Mission over Indiana Jones were just naturally more interested in seeking out information on their own treatment. Perhaps these kids would have gained just as much cancer-related knowledge whether or not Re-Mission was available to them. In addition, while the game did seem to improve the players’ understanding of the disease, the authors conclude that the effect is too small to justify funding for games aimed at cancer treatment.

I find it interesting that the subjects rarely played more than a few of Re-Mission’s levels. I’ve never played the game and so I can’t speak to its quality; however, my suspicion is that it’s probably a rather mediocre third-person shooter at best. Searches on both Metacritic and Game Rankings turn up zero reviews—usually not a good sign. If the authors are correct in attributing the subjects’ knowledge gains to Re-Mission, then it seems odd that they don’t venture any thoughts on how the game’s perceived quality (or lack thereof) may have influenced the results.

Despite my pessimistic appraisal of the study, I should say that there is nothing wrong with trying to find creative ways to improve the lives of terminally ill children, and I commend anyone seeking out new methods to alleviate people’s suffering. While there may be better ways to allocate money for cancer treatment than making videogames, I sincerely hope that game designers will continue to push the boundaries of the medium. Even if Re-Mission falls short of its mark, it's still a step in an interesting direction and a jumping off point for further developments.