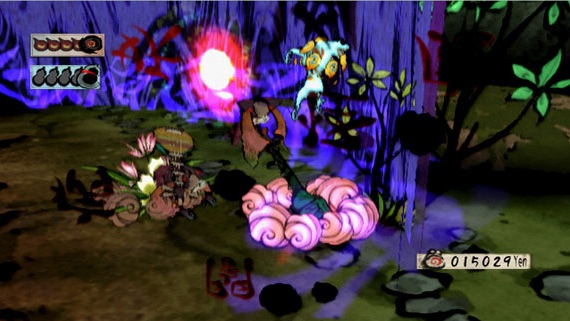 A few weeks ago I was watching my brother play The Legend of Zelda: The Wind Waker, and it got me thinking again about how cel-shaded-style graphics seem to age much better than realism-centric graphics. This certainly isn't a new concept, and plenty of people have noted this before. That being said, I was still quite struck by it. Back when Wind Waker first came out I remember actually talking about how its cartoonish visuals would probably hold up pretty well over time. So it was neat to be looking at it five years later and going, "Yep, still looks pretty good." The reasons are obvious.

Games that use a cel-shaded style, such as Wind Waker, Killer7, and Okami, tend to look more visually coherent and artistically whole than their realism-focused brethren. Since cartoonish graphics don't necessarily rely on super complex textures and fine details, it has become possible in the last decade to create games that appear cel-shaded and that don't give the impression of being technologically constrained. That's not to say that the above mentioned games couldn't look even better, but they come closer to seeming like they achieved what they were going for visually than, say, Resident Evil 4.

I'll be very interested to see how this plays out over the next 10 years. Gears of War looks absolutely amazing today. But someday it will probably look more dated than Okami. The fact is that while there may still be room for improvement in the cel-shaded graphics department, there is still far more room for improvement when it comes to making games look photorealistic, both in terms of movement and graphical nuance. Games today look good, don't get me wrong. But put a scene from Mass Effect next to a scene from any live-action movie and it becomes painfully obvious how far we have to go.

My point here isn't to say that photorealistic graphics are what videogames should be striving for, but rather to make it clear that we have in no way arrived there yet. Anyone who thinks otherwise needs to do a serious reality check, no pun intended. Personally, I'd like to see more games break away from the push toward photorealism. That's what makes me especially excited about the next Prince of Persia game. As more developers start approaching games as an opportunity for artistic expression, I think we'll see game makers ditching quasi-photorealism in favor of more timeless visual styles.

Personally, I wonder whether videogames should even become photorealistic. Aside from the graphical issues that need to be tackled first (taking into account the dreaded uncanny valley principle), one has to wonder whether photorealism is something we really want. Games are perceived as games _because_ they are not realistic. This has given room to experiment with different genres, from racing to shooters. But when photorealism sets in, games become more of a simulation than a mere game. Imagine killing people in Hitman in a photorealistic manner. Or shooting enemy solders in all its details. At that point, it becomes too… Read more »

Not only do Nintendo innovate, but they create such distinctive are styles… Their games truly are the greatest from a visual standpoint and a ganeplay standpoint!