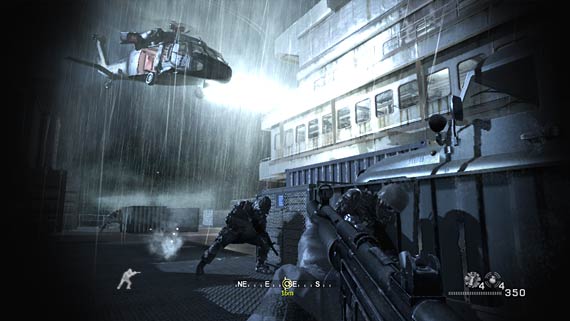 I love big games. Ambitious. Large-scale. Epic. The level of dedication and commitment required to finish these kinds of games, with their complex control schemes and 20-plus-hour playtimes, has earned them the apt label “hardcore.” As I’ve gotten older, however, I’ve found it increasingly difficult to find the time to play the types of games that I like. Now comes Call of Duty 4: Modern Warfare (CoD4), an outstanding rollercoaster ride of a first-person shooter that crams so much action into its roughly six-hour playtime that it manages to feel just as grand as games two or three times its length. A prime example of quality over quantity, CoD4 is the kind of highly polished, densely packed, cinematic experience that reminds me of why I play videogames.

The game puts players in the roles of a British S.A.S. officer and a U.S. marine as they fight through Russia and the Middle East in an effort to avert nuclear catastrophe. The plot and setting, which involve a military coup in a fictional Arabic country, feel highly topical in that they resonate with the images and rhetoric that we tend to associate with the real-life “war on terrorism” and the supposed nuclear threat posed by violent and unstable “rogue nations.” Despite the story’s global scope, the game credibly boils everything down to the actions of a small handful of soldiers. Overall, Modern Warfare feels decidedly modern and relevant, and provides a welcome change from the countless WWII clones on the market. 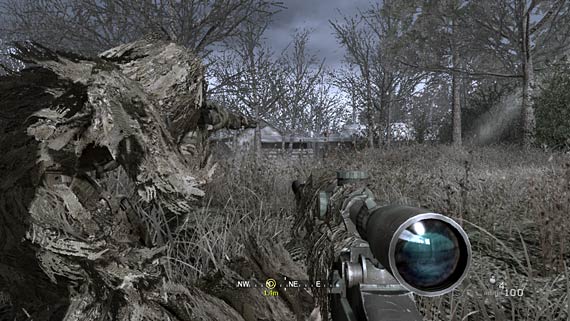 CoD4 also serves as an excellent example of how the interactive nature of videogames can be used to enhance the emotional impact of a story. The narrative seamlessly unfolds via a series of scripted moments interwoven into the action; the fact that the player can look and move around during these scenes virtually erases the barrier between storytelling and gameplay, greatly increasing the sense of immersion. There are two astonishing scenes in particular—one shown through the eyes of a kidnapped middle-eastern president, and the other shown through the eyes of a marine in a downed helicopter—that brilliantly demonstrate how an interactive first-person view of a character’s situation can be used to evoke empathy.

The gameplay primarily consists of moving from checkpoint to checkpoint and shooting or blowing up enemies along the way. Taking cover is important, but since bullets can penetrate most walls and barriers to varying degrees, players must be conscious of the type of material they are hiding behind. Although the lack of a specific cover mechanic may seem like a glaring omission, it quickly becomes apparent that the game works best without one. Ducking behind objects rather than “sticking” against them facilitates the game’s fast and fluid pace. Grenades are used in abundance—indeed, they have a dedicated button on the controller—and dodging or throwing them back at the enemy is a necessary and regular occurrence.

Progress through the game is highly linear. Sure, there are a few minor variations in how the player can approach a given battle or objective, but the fighting still follows a more or less fixed path. There is no so-called “emergent gameplay” to be found in CoD4 in that the player is not provided with a large sandbox environment in which to explore and experiment. However, such limitations become virtually meaningless in the face of the sheer quality and intensity of the experience. The guns have a satisfying pop and recoil, and a special auto-aim mechanic that lets players zero in on nearby enemies with a quick button press helps compensate for the usual slowness involved in moving the aiming reticule around with the analog stick. 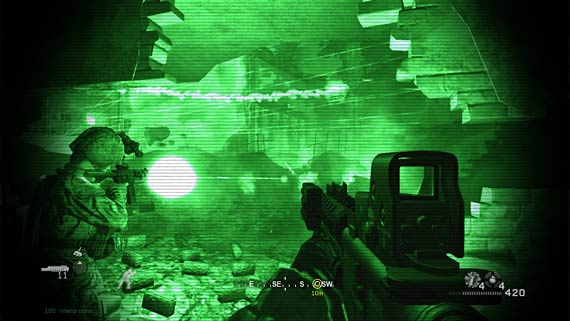 The action is reinforced by some of the finest visuals ever to grace a videogame. Sitting in a helicopter, I could see my captain’s face illuminated by the glow of his cigar, while flashes of lightning periodically pierced the darkness outside to reveal the ship I was about to board. A mid-game sniping mission stands as perhaps the most photorealistic videogame sequence I have ever played. In it, I could see subtle patterns of light and shadow fall over my gun and the distorted image of my surroundings reflected in the riflescope. This attention to detail extends to the bullet-whizzing, explosion-infused sound design, which does a fantastic job of giving the impression of being in the middle of raging battles and firefights.

Playing CoD4 could be likened to listening to a great album, or watching a first-rate action flick. It will feel pretty much the same each time, but the ride is so fun and entertaining that it is well worth playing over again. While some players may be disappointed by its relatively short campaign, the sheer quality on display in addition to the deep multiplayer mode more than make up for it. Not everyone can spend 20 hours on a game. I think there should be more titles out there that try to convey a large-scale feel within a short, high quality package. With its polished cinematic presentation, well-paced action, and surprisingly emotional story, Call of Duty 4: Modern Warfare brilliantly captures the feel of a grand, epic game. Rating: 9 out of 10

You obviously just don’t like video games that are fun, I feel sorry for you.

Gameplay innovations? Practically none. However… Quick and appealing game play, with a variety of interesting scenarios that alter the basic run and gun mechanics well. (My favorite being a scenario in which you have to carry a wounded soldier as you go, dropping him and stopping to clear a path periodically.) A sense of seriousness and cost, plus intriguing playing with perspectives. Much talk has been devoted to a mid-game scene featuring a large explosion and its aftermath, but I’d prefer to focus on an earlier scene featuring an execution, putting you in the role of the executed. The whole… Read more »

call of duty 4 is everything that is wrong with games today… it is one of the weakest and most bankrupt (in terms of content) experiences i’ve ever had… the gameplay is borrowed from goldeneye game design of 11 years ago… the game is actually worse than its own predecessor call of duty 2 (which was revolutionary for its time) games like metal gear solid 4 actually appear to be amazing and enlightening compared to the endless crap that games like COD make you sit through – i don’t understand why COD does not get similar crap ratings? the theme… Read more »