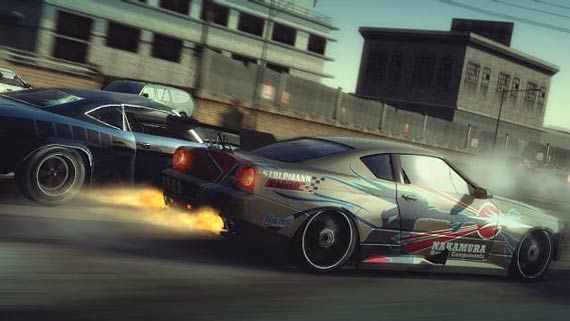 If there were a heaven for cars, then Burnout Paradise would be it. Consider the following. In Paradise City, where the game is set, there are no drivers in the cars and no people on the streets. Traffic laws are nonexistent, and the laws of physics apply only loosely. All the roads are filled with other cars ready to be raced with or crashed into. It's impossible to damage a car to the point of being undrivable, and getting auto repairs or a new paint job is as easy as zipping through a drive-thru. Nearly every nook and cranny of the city contains shortcuts, ramps, and opportunities for stunts. Not only that, but cars seemingly drop right out of the sky over at the junkyard, as if deposited there by some automotive deity. Yes, if there were an afterlife for cars, this would be it.

Burnout Paradise is a racing game unlike any other I've played. Breaking from the longstanding tradition of giving players a series of isolated tracks to choose from, the game puts players inside the large, continuous open world of Paradise City. To start an event, just pull up to one of the city's many traffic lights. For races, players are merely shown the location of the finish line on the map. The route taken to the finish line is a matter of personal discretion, and getting to know the city and all its hidden paths and shortcuts paves the way toward more creative and efficient routes. In addition to regular races, there are events that call for reaching a destination without getting totaled ("Marked Man"), crashing into other cars ("Road Rage"), and pulling off sequences of stunts to earn a high score ("Stunt Run"), and moving in and out of these events feels remarkably seamless.

Despite the radical new open-world format, those familiar with previous Burnout titles will easily recognize the game's distinctive pedigree. Nowhere is this more evident than in its glorious exaltation of crashes. As with Burnout 3: Takedown and Burnout Revenge, crashes in Paradise are an awesome spectacle—destruction elevated to a form of hood crunching, window smashing, metal sparking art. Causing competitors to crash ("takedowns") treats players to a satisfying slow-motion view of the resulting automotive havoc. Compared to previous Burnout games, however, the takedown camera view in Paradise feels relatively toned down. For my money, Burnout 3: Takedown still offers the most superbly over-the-top slow-motion crash views in the entire series. 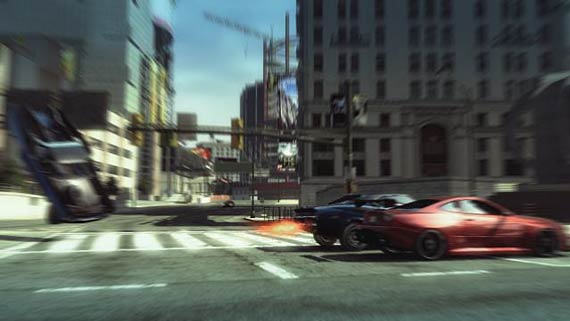 Being the victim of a crash in Paradise (although "victim" is hardly the appropriate word) treats players to a special camera view that conveys a more artsy off-the-cuff style than that of previous titles. While the effect of seeing a dramatic super-slow-motion shot of the point of impact for each collision is highly entertaining in its own right, Paradise unfortunately leaves out the trademark "aftertouch" feature of its predecessors. Players familiar with those games will recall that it was possible to actually "steer" vehicles mid-crash (physics be damned) into other cars, thus giving players the chance to turn misfortune into opportunity by taking out one or more rivals in the process of crashing. "Aftertouch" mode was one of my favorite aspects of the previous Burnout games, and its omission here feels unwarranted.

Many players have complained about the fact that it's not possible to restart an event without driving all the way back to the intersection where it began. While this can be inconvenient, especially during later stages of the game in which players will have likely narrowed their focus to beating just one or two particularly tricky events, I think it was the right choice overall as it reinforces the compelling sense of continuity that exists within the open world of Paradise City. Allowing players to avoid traversing the city would have undermined the cohesiveness of the game world. Eliminating such "do over" shortcuts forces players to break free of the kind of obsessive tunnel vision that goes with playing (and losing) the same event over and over again. Yes, the inconvenience can be frustrating, but it also keeps neurotic players from experiencing premature burnout (pun intended) and losing perspective.

Burnout Paradise is even entertaining when it's not being played. Leaving the controller for a couple minutes sends the game into an elegant black and white view in which the camera travels slowly through the streets while classical music (e.g., Beethoven's Moonlight Sonata) plays in the background—a stark contrast to the game's loud pop-rock-fueled mayhem. It's cool to see a game that cleverly induces players and non-players to leave it on by offering a built in screen saver that offsets the action. Case in point: shortly after concluding a recent play session to go eat dinner with my fiancé, we were both surprised to hear pleasant opera music coming from the TV (yes, I do find opera pleasant sometimes) just as we were pouring the wine. It was a delightful and unexpected example of how an otherwise loud and distracting racing game can serve as a vehicle (no pun intended) for lifestyle enhancement. 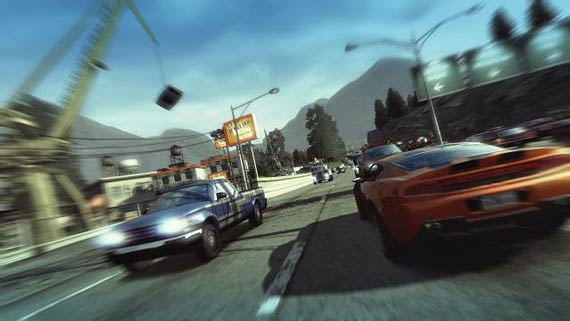 Paradise City is a beautiful sight to behold, and I find it astonishing that the developers were able to design a city that looks so good while being driven through from almost any and every direction. Whether cruising around the dense city center, careening through the hills, or launching over a river, the smooth frame rate and crisp graphics never falter. Aside from some rare clipping issues, everything looks fantastic, which is all the more remarkable considering that there are virtually no apparent load times. The soundtrack, which mainly consists of alternative and pop rock tunes, works reasonably well with the action. Since players' mileages will certainly differ on the music, however, an option for in-game soundtrack customization would have been appreciated. Burnout Revenge supported this feature, and it's strange to find it absent here.

In the end, Paradise is both more and less than its predecessors. Not everything that made the previous Burnout games great has survived the transition to the new open world format. By not having dedicated tracks and courses, it can't quite match the sheer velocity of its predecessors, and the new "crash mode" lacks the enjoyable puzzle-like aspect it once had. At the same time, the new changes confer a refreshing level of freedom, flexibility, and creativity that would have been impossible within the old framework. Paradise isn't really any better or worse than previous entries in the series. It's just different. Going with either approach involves some inevitable trade-offs, and so I hope that we haven't yet seen the end of the more traditional Burnout titles. Regardless, the series' bold new direction represents an exciting evolution of the racing genre. While there may not be such thing as a heaven for cars, Burnout Paradise comes pretty close to being heaven for racing-game fans. Rating: 8 out of 10

The game will be coming out on PC, please don’t forget to review the PC version guys, like other sites do.

Well, I tested this out last night and here are the problems I have with it. First, the sound level on my “custom” music seems much lower than the game’s music, so I had to go into the menu and put the sound effects volume waaaay down for it balance out. Second, when a car crashes, I no longer get that cool muffled effect with the music that happens with the game’s normal soundtrack. It’s this latter issue, much more than any concerns about the “DJ Atomica patter”, that makes it feel un-integrated to me. The sound balance problem is… Read more »

I think I see your point, though I’m not sure how big a deal it is. Sure, you can’t integrate your own music with the DJ Atomica patter but if you can still have your own music playing instead of the game’s soundtrack how much does that really matter?

I played the Xbox 360 version. Regarding soundtrack customization, my understanding, based on the research that I did, is that there is no way to have music fully integrated into the game in the same way that the game’s original soundtrack is.

Correct me if I’m wrong, but the soundtrack “customization” that is apparently available seems to offer an effect no better than what one would get by just turning the game’s music down and playing music off a separate stereo. To me, that’s not true in-game soundtrack customization.

What system was this reviewed on?

Great review, but I did need to point out that the PS3 version was obviously the one reviewed since the 360 version has the same custom soundtrack options as any other 360 game. Also, the developers (http://www.criteriongames.com) covered the issue with custom soundtracks on the PS3 several times in their podcasts leading up to the launch of the game and was covered relatively well in the rest of the gaming press. The short version: The PS3 did not have support for that feature during development. It might be a good idea to verify that a particularly pointed criticism exists on… Read more »