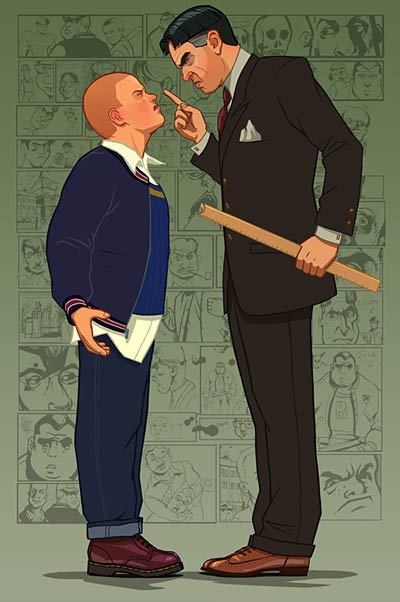 I attended what I would consider to be a pretty typical public high school. We had a wide range of personalities and social cliques. There were occasional fights and pranks and general instances of trouble making. A few of the teachers seemed a bit strange. But for the most part, the students were reasonably well behaved and the teachers were, by and large, competent and conscientious. In short, my high school was absolutely nothing like Bulworth Academy, the setting for Rockstar's Bully: Scholarship Edition, a place where violent fights break out daily, social cliques go to war with each other, and teachers and students regularly engage in bizarre and criminal behavior. While these extreme antics can strain credulity, they provide the basis for a story that (by videogame standards) is more entertaining than most and numerous gameplay elements that through sheer variety almost make up for their lack of individual depth.

A slightly expanded port of the original Bully on the PS2, Scholarship Edition opens as the game's protagonist, Jimmy Hopkins, is being dropped off at Bulworth Academy by his mother and wealthy new step-father, whom we learn are about to begin a year-long honeymoon. Within minutes of his arrival, Jimmy is befriended by the charismatic and amoral Gary, who helpfully shows him around and teaches him about the school's different social groups—an assortment of jocks, nerds, preps, and (oddly enough) greasers. This exposition lays the groundwork for a rather convoluted story in which Jimmy tries to win the respect of the different social circles (usually through beating up the members of said circles) while the borderline-sociopath Gary turns on Jimmy and assumes the role of chief antagonist. Along the way, Jimmy will learn the art of hand-to-hand combat from a homeless Korean War veteran, beat up Santa Claus and his elves, go on dates to the carnival, and kill a giant Venus Flytrap, all in the name of climbing the social ladder. 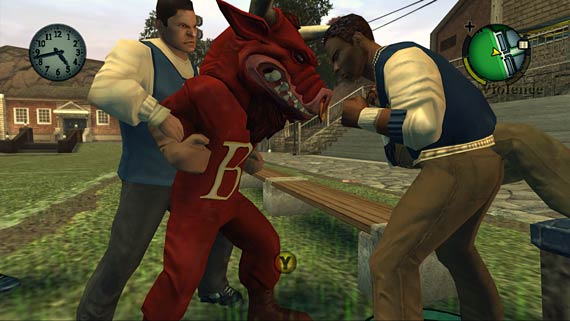 To be sure, the story doesn't compare favorably to a good book or movie, but it is still well written relative to other videogames. (I hate to use the "good for a game" qualifier, but I believe it reflects the truth of where videogames are in terms of writing.) I was actually impressed by some of the voice acting, particularly that of the narcissistic Gary and the shy and socially isolated Petey, whose plight actually managed to evoke in me a small degree of pathos. It's unfortunate then that most of the game's characters come off as overly stereotypical to the point of absurdity (e.g., preppies who repeatedly refer to their families' inbreeding and jocks that speak as though mentally retarded). It makes sense for videogames to rely more heavily on archetypes than films and novels, but Bully's extreme stereotyping feels more cheap than clever, and undermines what could have been a much smarter story.

The gameplay is basically split between attending classes and completing missions. During the day, players have the option of attending classes in subjects such as math, English, chemistry, art, and gym. These essentially take the form of short mini-games of mixed quality. Scholarship Edition incrementally raises the bar on the original with some fun new classes. The biology class, for example, involves a surprisingly realistic dissection, and the music class takes a cue from the rhythm-game genre with some enjoyable timed button pressing. Unfortunately, the original courses have not been significantly improved. Chemistry consists of nothing more than hitting buttons as they scroll across the screen, and English resembles a simplified form of Boggle. It's easy to skip class, but probably best not to. Passing shop, for instance, awards players with a better-handling bike, and passing chemistry allows players to make small bombs in the dorm. Overall, the classes are an interesting diversion that, while not particularly deep, add a nice degree of variety.

Classes aside, the bedrock of Bully's gameplay consists of a series of Grand Theft Auto-style missions. (For players familiar with Rockstar's previous titles, it may suffice to describe Bully as GTA set in a high school.) Players initiate missions by following the onscreen radar to marked locations on the map. Missions include pulling pranks, infiltrating the girls' dormitory, escorting classmates from one place to another, fetching items for people, and fighting groups of rivals. In one sequence, Jimmy must help the school's hideous lunch lady gather items (e.g., perfume, sedatives, etc.) that she needs for her date with the chemistry teacher. Later, he must protect the couple during their dinner by shooting down interfering students with a slingshot. Another mission has Jimmy penetrating the heavily-fortified school observatory in order to earn a chance to parlay with the leader of the school's nerds. While Scholarship Edition sports an even wider range of missions than the PS2 version, like the original, it's still hard to shake the awareness that the individual gameplay elements (e.g., shooting, skateboarding, boxing, etc.) have been done better in other games. 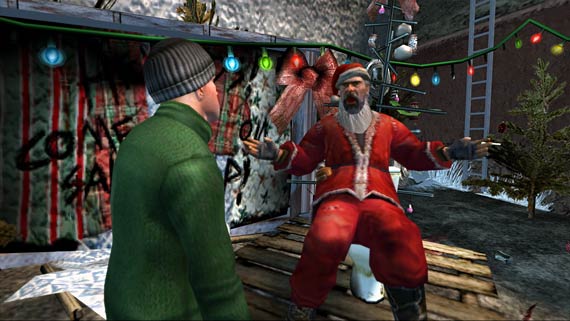 From a visual and technical perspective, Bully is nothing to write home about. Although Scholarship Edition sports slightly improved graphics over the original PS2 version, the game still has a distinctly last-generation look, with flat textures and simplistic art design. Given that, it's surprising that the game still suffers from frame rate issues. In addition, the way-too-frequent loading screens are an annoying disruption to the game's flow. The glitchiness of the Xbox 360 version (on which this review is based) has been widely reported. Even after downloading the patch that Rockstar released to fix the problems, I still experienced a couple glitches that resulted in the game freezing up and having to be reset. It wasn't enough to derail the entire experience, but it certainly left a sour taste in my mouth.

At the end of the day, Scholarship Edition's redeeming qualities are essentially the same as those of its PS2 forbear—namely, its entertainingly wacky story and intriguingly varied gameplay. Unfortunately, these positive qualities aren't enough to elevate it to greatness. Technical issues notwithstanding, the varied gameplay elements still can't quite make up for their lack of depth, while the story ultimately undermines itself by its unwillingness to take most of the characters seriously. With GTA, Rockstar succeeded brilliantly by creating an open world gameplay experience that truly added up to more than the sum of its parts. Sadly, they haven't quite succeeded in bringing that same quality to a high school setting. Much like the original Bully, Scholarship Edition is entertaining enough at times, but it never rises above being merely good. Rating: 7 out of 10

the good thing of this game can bring to the student but specially the name bully is not so pleasant to hear. Still, on the company behalf, they should need to make it attractive, especially for students.

From what you describe, Bulworth sounds only like a slight exaggeration of what goes on in some public high schools. Maybe not necessarily yours. But even in a private college prep school (where I attended), we saw many fights, some involving brass knuckles and police batons. The students and teachers were constantly in a political war with each other, sometimes ending in the teachers crying. I once caught our principal smoking weed on campus. Instead of “telling” on him, I was able to barter and trade a number of his Bob Dylan albums to keep. Hence, the reason why I… Read more »